Screwhorn77 said:
Wondering what's the idea here. Couldn't figure it out on my own, honest.
Click to expand...

just referencing a previous post about a guy who made a play.

Best in the World (part one)

The unthinkable had happened on July 17, 2011. CM Punk, with his contract set to expire at midnight, defeated John Cena in a barnburner to take home the WWE Championship, and ran out of Allstate Arena stealing the biggest prize in professional wrestling. Just a few hours before that match, CM Punk convinced Vince McMahon to allow him to go to any promotion to defend the title, with Punk saying: "I want to come back at Survivor Series".

Therefore; the CM Punk world tour began. He began with TNA.
"What in the hell is CM Punk doing in the Impact Zone? And he has the WWE title with him!"
- Mike Tenay, on an episode of IMPACT

Punk interrupted IMPACT and had another pipebomb-esque promo, claiming that TNA messed up when they had Punk the first time. The next week, he interrupted a segment between TNA World Champion Sting and Kurt Angle, saying, "I'm sure both of you want this more than you want that lump of crap around Sting's waist".

After scurrying out of the Impact Zone after a title match that got more eyes on the TNA product, he waited until the next pay-pew-view held by the company, No Surrender, to re-appear, declaring an open challenge to open the show.

And who came out? None other than the Phenomenal One himself.
No Surrender (Total Nonstop Action Wrestling)

The match was compared by many to be on par, with some even saying that it was better, than the Punk v. Cena encounter at Money in the Bank. Dave Meltzer thought so too - he rated it 5 stars, the first TNA match to get that coveted rating since Styles/Joe/Daniels at Unbreakable in 2005.

After Punk won it with a Styles Clash of his own...Punk thought it was save to trash-talk TNA some more...instead, Samoa Joe came out to level Punk with a Musclebuster. Punk was going to have one more match in TNA before he got out of Dixieland for good.

Until then, he managed to catch a flight to New York to a homecoming of sorts for Punk - his first appearance on a Ring of Honor card since leaving the company to head for WWE in 2005. The original Summer of Punk happened in ROH - now the Second Summer was going to make a stop by the promotion that first drew eyes on CM Punk.

"I'm glad to be back here, I really am...now give me who I am going to face in the main event tonight!"
- CM Punk at Death Before Dishonor IX

Lo and behold, it was the former ROH World Champion, Eddie Edwards. After some bickering, Edwards said:
"I am not only going to prove myself, I am going to make myself the WWE Champion tonight. I am going to prove that you can last 60 minutes in the ring with me."

Therefore, it was an Iron Man match for the WWE Championship.

After a grueling match that harked back to Punk's most iconic matches in ROH with Raven and Samoa Joe, CM Punk hit the GTS with 15 seconds left to break the tie and walk away the WWE Champion once more.

Next up on Best in the World...Who is the "true" WWE Champion in Stamford?​

The 2004 Belarusian presidential election was held in two rounds on the 24th June and 11th July 2004. Incumbent President Sergey Kalyakin, supported by the BSDH (Assembly) party and the PCB, was running for re-election to a second five-year term, which would be his last under the Belarusian constitution.

Kalyakin’s first five-year term had been marked with considerable economic insecurity, as his efforts to ‘chart a middle ground between Europe and Russia’ that he had promised in his inaugural address had proved difficult. New Russian President Vladimir Putin, elected in 2000, had been hostile to Kalyakin’s desire for Belarus to continue to have ties to Western Europe, and Kalyakin had struggled to get along with Polish President Aleksander Kwaśniewski and Prime Minister Jerzy Buzek due to their support for market liberalism rather than a socialized economy as he and his party supported.

The early 2000s recession had caused significant problems for Belarus’s economy, and the early emergence of this contributed to the BSDH and Kalyakin’s PCB losing support in the 2000 parliamentary election. His use of a referendum to reduce the parliamentary term to four years to make it concurrent with the presidential election was also argued by the opposition to be a power grab, and it failed.

The movement against Kalyakin and the BSDH had coalesced around the successor to the BPF, the Conservative Christian Party (CCP), though as Prime Minister its leader Zianon Pazniak had become unpopular for his frequent feuding with Kalyakin and his anti-Russian stance. As a result, instead of nominating him for the Presidency as the BPF had done twice, the CCP instead nominated Siarhei Navumchyk, another former democracy activist and a journalist who had fought against both Kebich and Kalyakin’s referenda. Like Pazniak, he had a pro-European stance, and was noted for being much more conciliatory towards European governments. He also advocated for market-oriented economic reforms.

During the campaign, Kalyakin campaigned on the economy, claiming that Navumchyk would bring about severe economic instability and attacking statements he had made prior to the Iraq War suggesting he sympathized with the war coalition (Kalyakin had ensured Belarus did not participate in the war). This allowed him to regain significant momentum and despite Navumchyk enjoying significant poll leads at first, Kalyakin started to close the gap during the spring of 2004.

The first round saw Kalyakin come narrowly ahead of Navumchyk in a surprise result, helped by the CCP bleeding votes to the agrarian BAP. Ultimately Navumchyk prevailed in the second round with 52.3% of the vote to 46.6% for Kalyakin; analysts suggested the first round galvanized support for Navumchyk and noted his campaign’s increased support and funding from other countries after it. The election’s second round is noted for the lowest-ever vote for the ‘None of These Candidates’ option in a Belarusian presidential election, at just 1.1%.

LoneStarCowboy said:
I must ask this: what's Texas doing in this situation?
Click to expand...

also independent, but run by a center-left government

Ashita said:
also independent, but run by a center-left government
Click to expand...

Hey, I'll take it. Could be a lot worse. You got a wikibox for one of its elections?

LoneStarCowboy said:
Hey, I'll take it. Could be a lot worse. You got a wikibox for one of its elections?
Click to expand...

In the Commonwealth We Trust: Elections Part Five 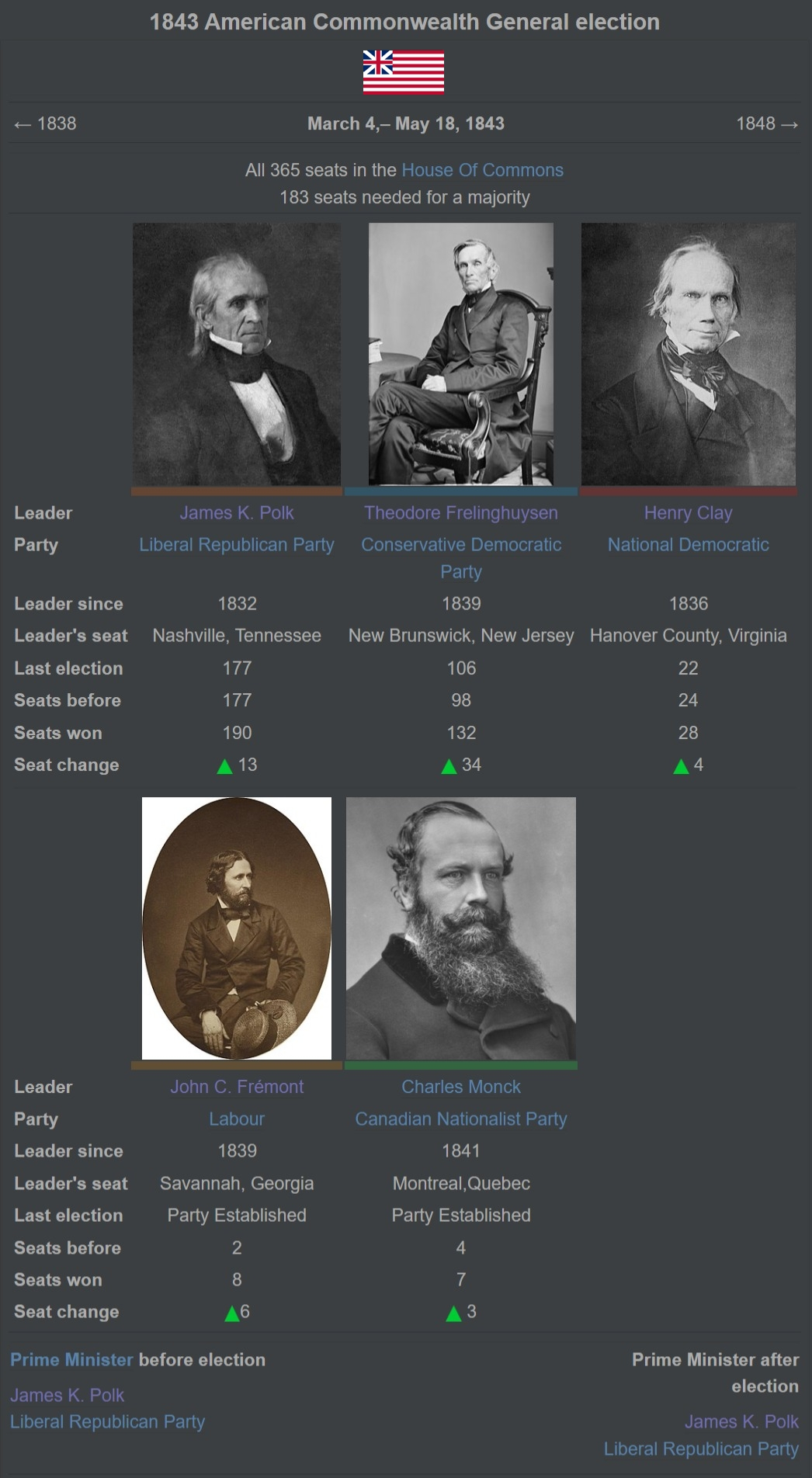 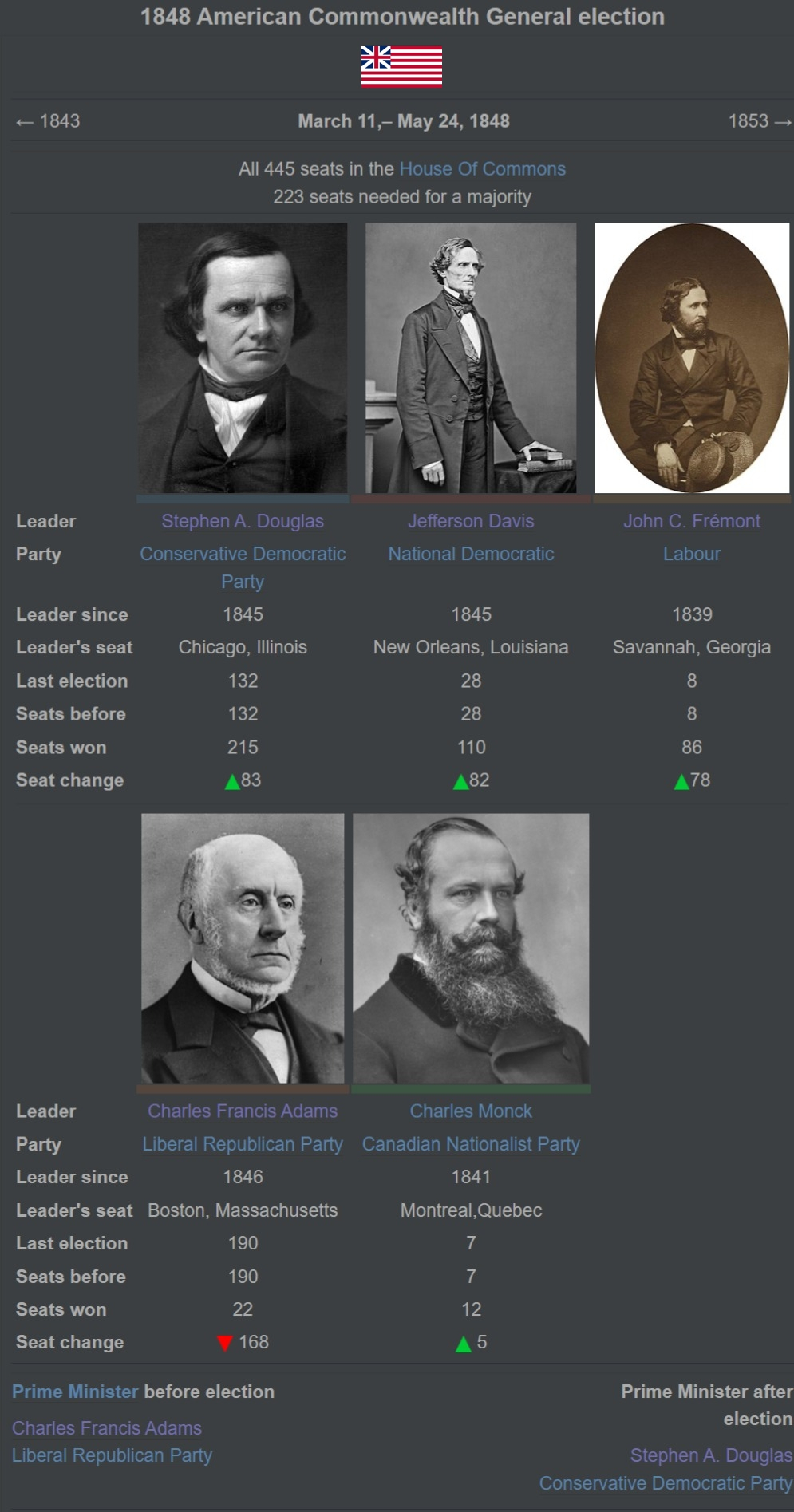 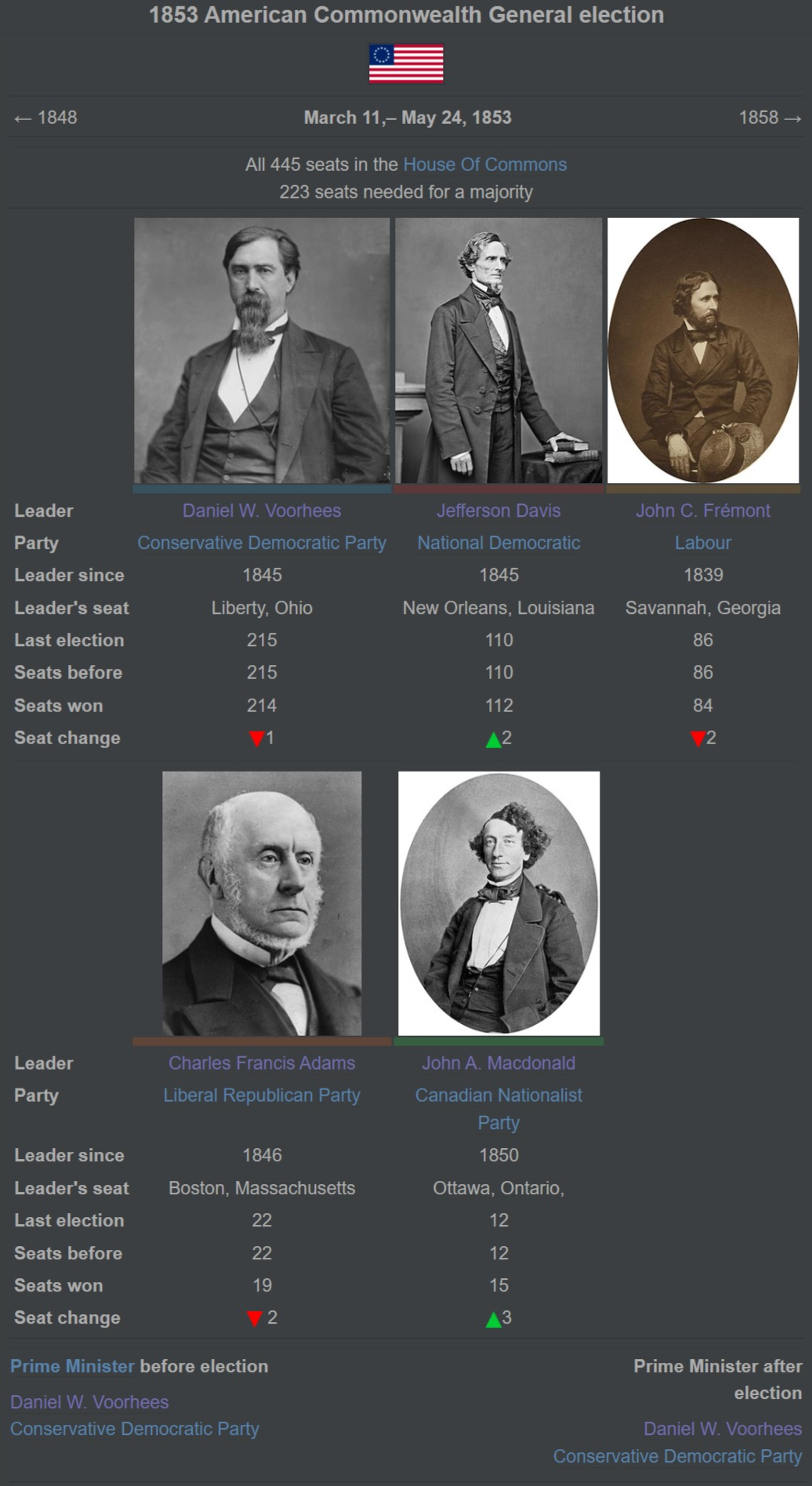 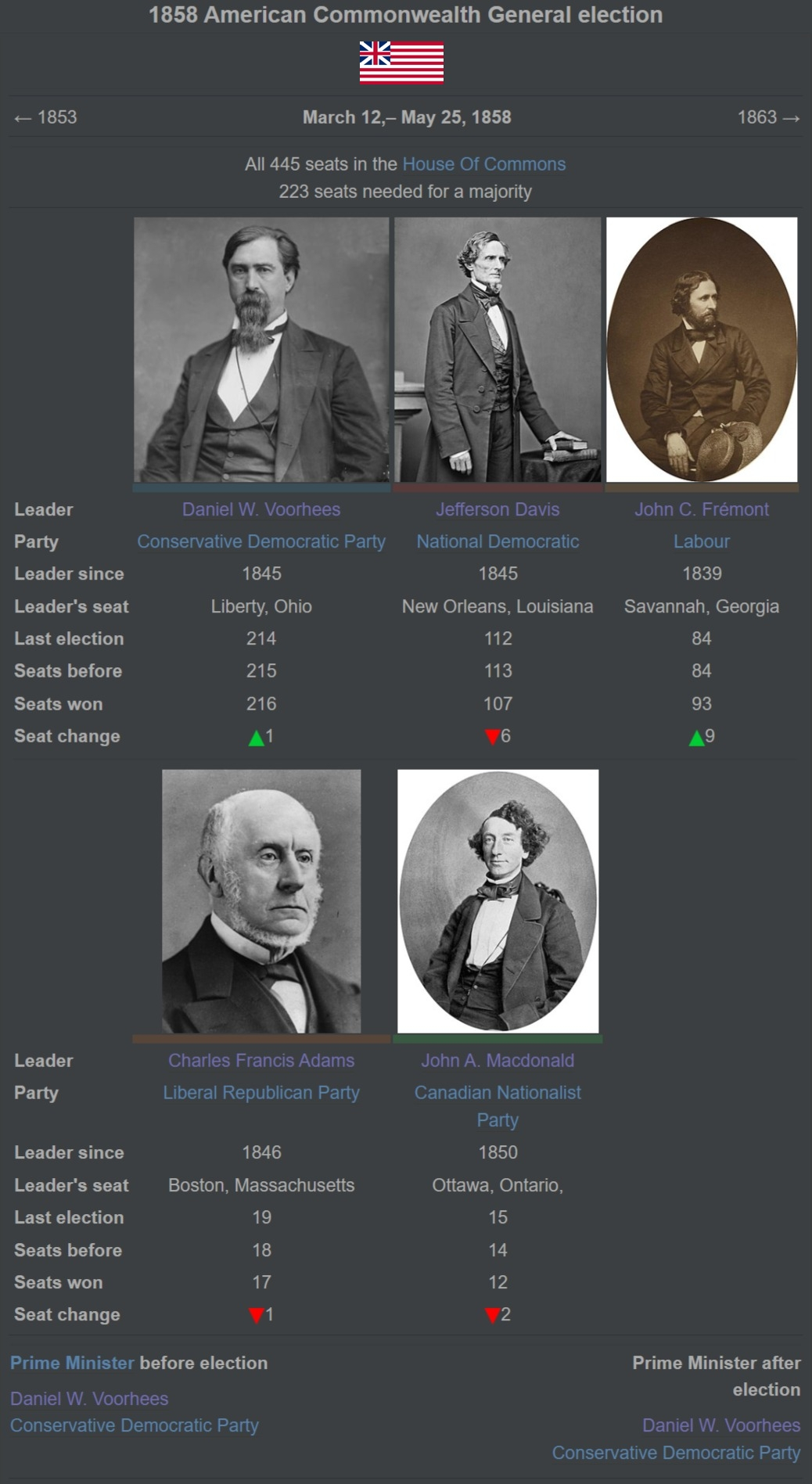 RoxyLikeAPuma said:
List of Presidents of the United Pacific States 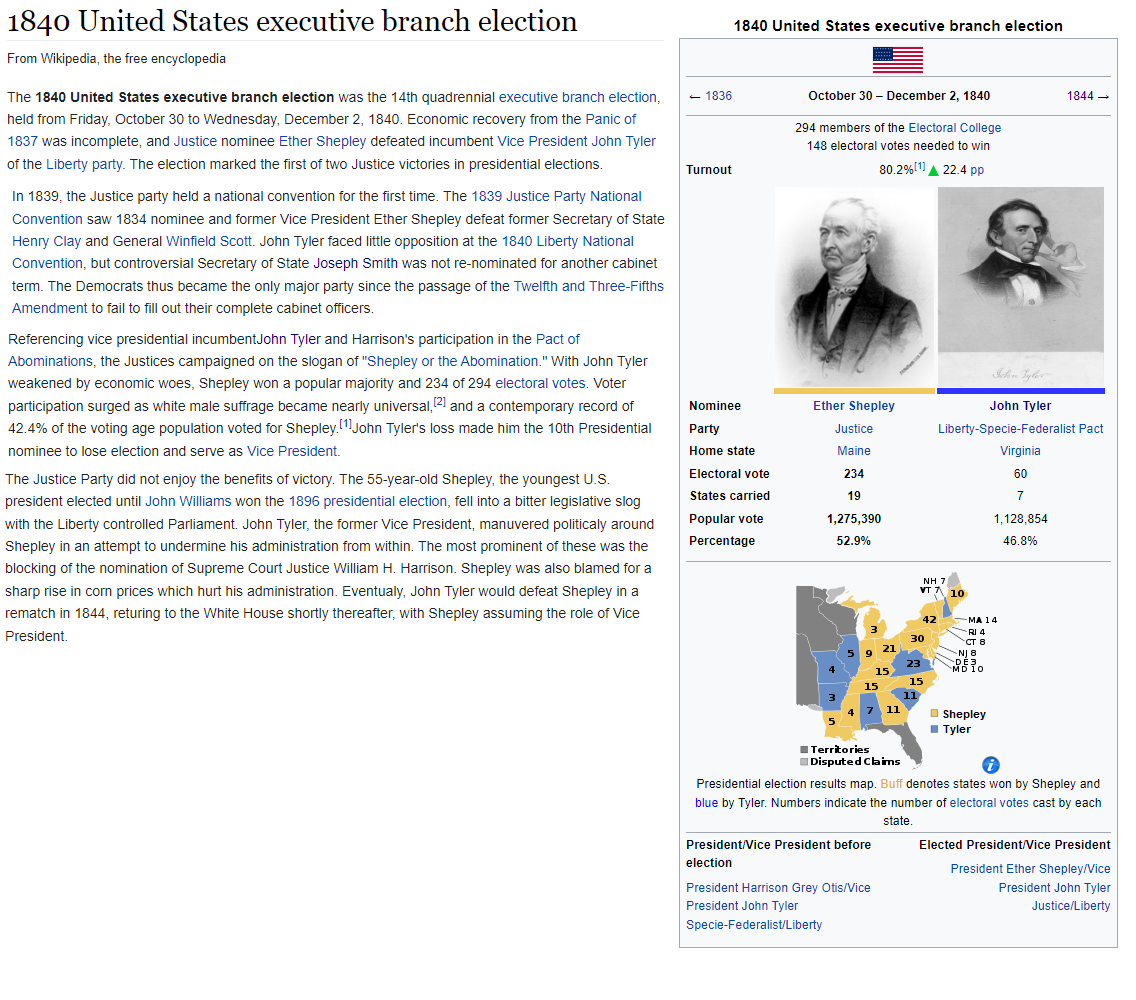 Look to the West(ern Reserve)

Ever since Connecticut had acknowledged Pennsylvania’s ownership of the Wyoming Valley, the Western Reserve, abutting Lake Erie, had been in an awkward situation. Separated by two states and hundreds of miles, the territory was cut off from its own state. Elected officials had to spend time traveling between Connecticut and the Reserve to win statewide, and many Reservers felt isolated from their government. It was taken as a given that, eventually the two states would part ways. In the state capital this was discussed quite amiably. But then came the Missouri compromise. It was Maine that was chosen to be admitted with Missouri, and from then on pairings between slave and free were required. And new territories seemed to get priority, especially as the Reserve became a hotbed of abolitionist activities. Thus the Reserve remained attached at the hip to Connecticut.

As the reserve’s population grew, it became convention that the Lieutenant Governor would reside in Warren and be from the Reserve. This practice soon expanded and Connecticut would become the only state with Lieutenant Treasurers, Secretaries of State, etc. However tensions still remained. The Reserve’s population climbed, and would eventually surpass Connecticut proper. Industry came and Cleveland grew, dividing the state’s two halves further apart. Resentment grew, particularly as an understanding could not be reached as to dividing the state’s Senate delegation.

Thus, when a referendum was called in 1869 to divide the state, many expected the measure to pass easily. Both major parties supported it. Democrats could maybe win in Connecticut proper on occasion, but never with the fiercely Republican western reserve. Republicans would still have a good chance for power in Hartford, and would have free reign in the new state. Meanwhile the Reserve would have a chance to chart its own destiny, perusing policies to favor a Great Lakes Economy not an Atlantic one.

However, the “No” campaign proved surprisingly well organized, supported by farmers in the interior. For some, distance from central power was a blessing, not a curse. Worries were also raised that favor would fall towards the Lakeside industrial powers, not the common man. Supporters of Statehood did themselves few favors, trumpeting mainly the benefits to the cities, not the countryside. The biggest mistake was likely the position that Cleveland, not Warren, would be the new state capital. This sent many in the Southeastern Reserve into a feral panic.

Election Day came, and with it a shock rejection of statehood. Outside of Sandusky and Cleveland, citizens declared an intent to stick with Connecticut and the headaches that came with it. It was not the end of statehood fights, and many of the areas that had rejected the referendum would soon industrialize. But it was enough to call into question the long-standing assumption of inevitability surrounding the division of Connecticut. 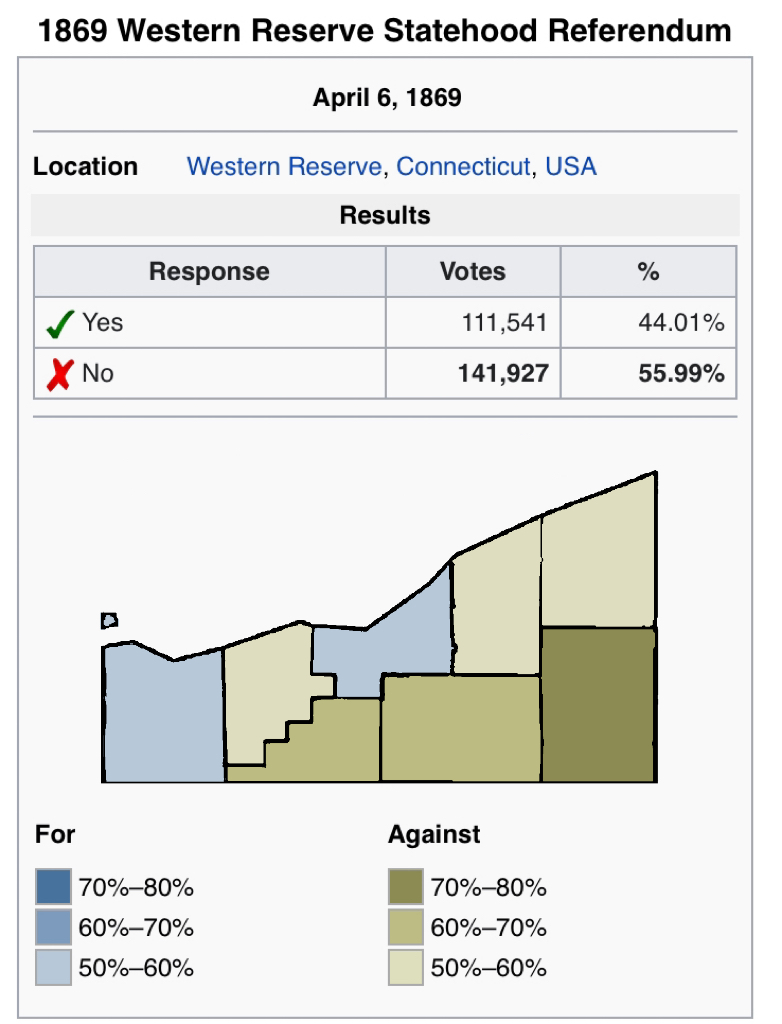 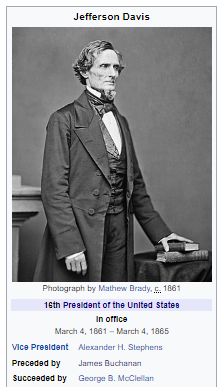 What happened to the other 47.6% of the popular vote? No way that it could be divided between 10-12 minor candidates or write-ins right?

Infinity-Blitz7 said:
What happened to the other 47.6% of the popular vote? No way that it could be divided between 10-12 minor candidates or write-ins right?
Click to expand...

fuck i forgot to edit that

Why did you quote an almost two year old post?

Just a little odd, that's all.

The four main countries in the Final Fantasy XII setting:

This is the largest map available in the game: 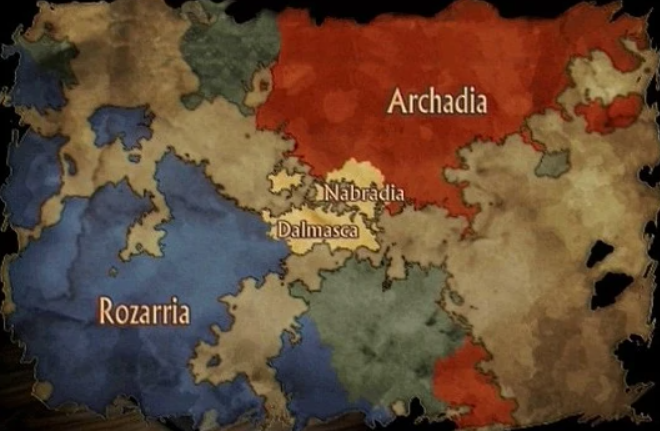 Many of the elements here are invented from information within the game or from elements in other games canonically in the same universe
Last edited: Jun 21, 2022
Threadmarks
Reader mode
You must log in or register to reply here.
Top
Share:
Share
Top