The Great Martain Invasion: Part Three
Tripods waded up the Thames,
Cutting through bridges as though they were paper.
Waterloo Bridge, Westminster Bridge, one appeared above Big Ben.
Never before in the history of the world had such a mass of human beings moved and suffered together. 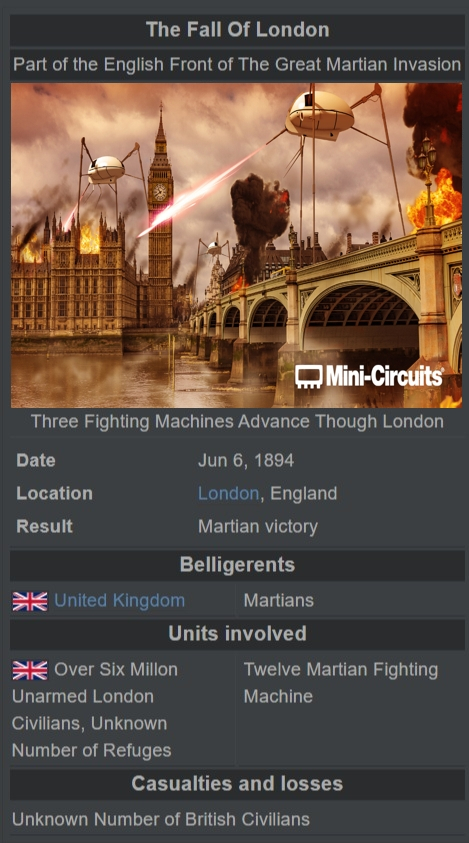 It was the beginning of the rout of civilization
Of the massacre of mankind.
There were ships of shapes and size scattered along the bay
The Invaders must have seen them as across the coast, they filed
Standing firm between them laid thunder child. 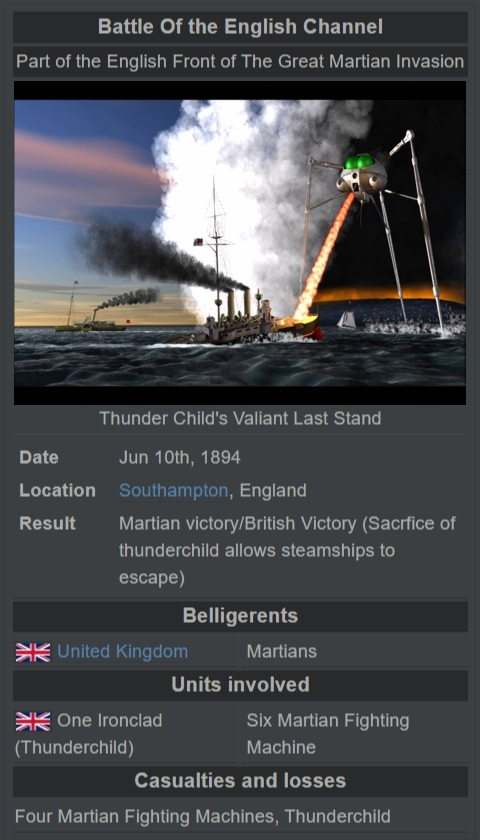 The Smoke of battle cleared and the Thunder Child had vanished forever,
Taking with her man's last hope of victory
No one and nothing was left now to fight them
The Earth belonged to the Martians.
(all words from this are from: and . Its great inspiration) 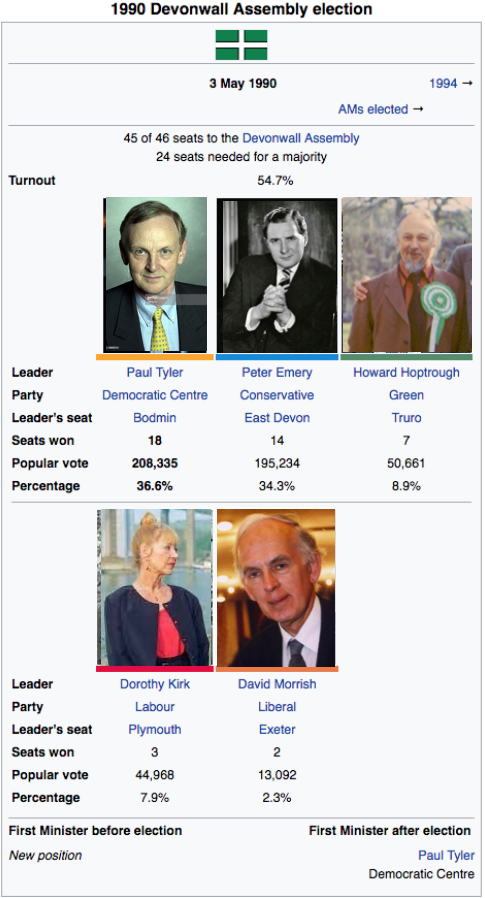 The first election to the Devonwall Assembly was held on 3 May 1990. Following the election, the DCP and Green Party formed a coalition, marking the first participation of the Greens in a coalition government anywhere in the UK. Devonwall was one of the most competitive of the regional elections of 1990, owing to its position as a swing state between the DCP and Conservatives.

Above the titan's multitude of blackbirds was circling and clustering about the hood.
Out of the hood hung red shreds, at which the hungry birds now pecked and tore
The Martians were dead. slain, after all, man's devices had failed by the humblest thing upon the earth. 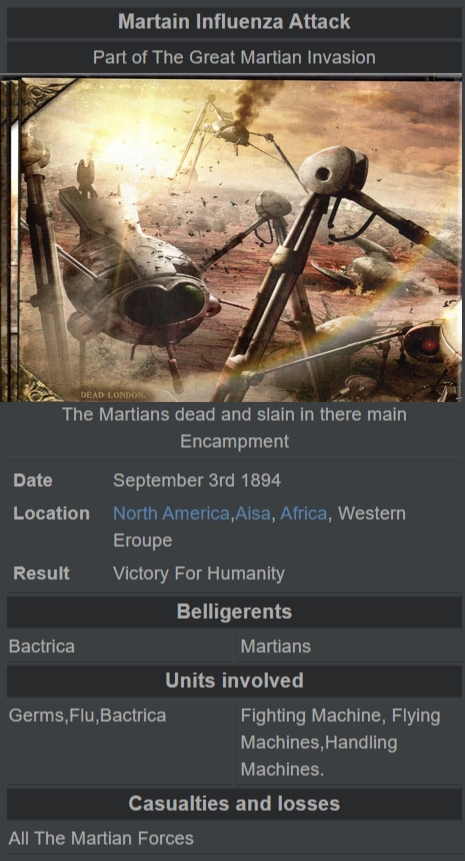 Directly the invaders arrived and drank and fed, our microscopic allies attacked them.
From that moment they were doomed!


The torment was ended.
The people scattered over the country,
Those people were desperate, leaderless, starved and The thousands who had fled by the sea all would return.
The pulse of life, growing stronger and stronger, would beat again 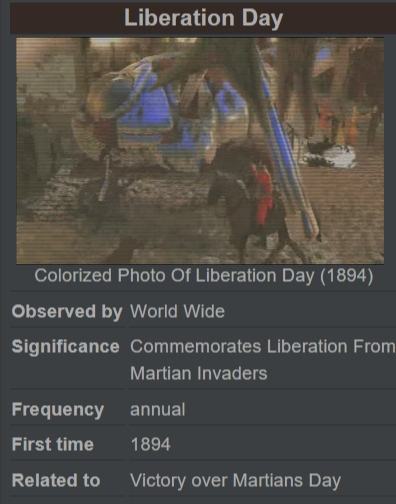 Yet Fears for Another Attack from mars causes universal concern.
Is our planet safe?
Perhaps the future belongs not to us - but to the Martians.

Kaiser Wilhelm the Tenth said:
Right you are-- my apologies.
Click to expand...

Could you also upload it somewhere like Imgur in parts, as even opening the image in another tab sets my computer roaring like an asthmatic lion. I would love to read it, but in it's current state, I can't.

Instead of going extinct at the end of the last Ice Age, the Woolly Mammoth survives (though as a endangered species) in the Northern portions of Russia, Scandinavia, Canada and the US.

View attachment 679784
View attachment 679785
Instead of going extinct at the end of the last Ice Age, the Woolly Mammoth survives (though as a endangered species) in the Northern portions of Russia, Scandinavia, Canada and the US.
Click to expand...

That's going to have some serious consequences for the ecosystem of those areas: 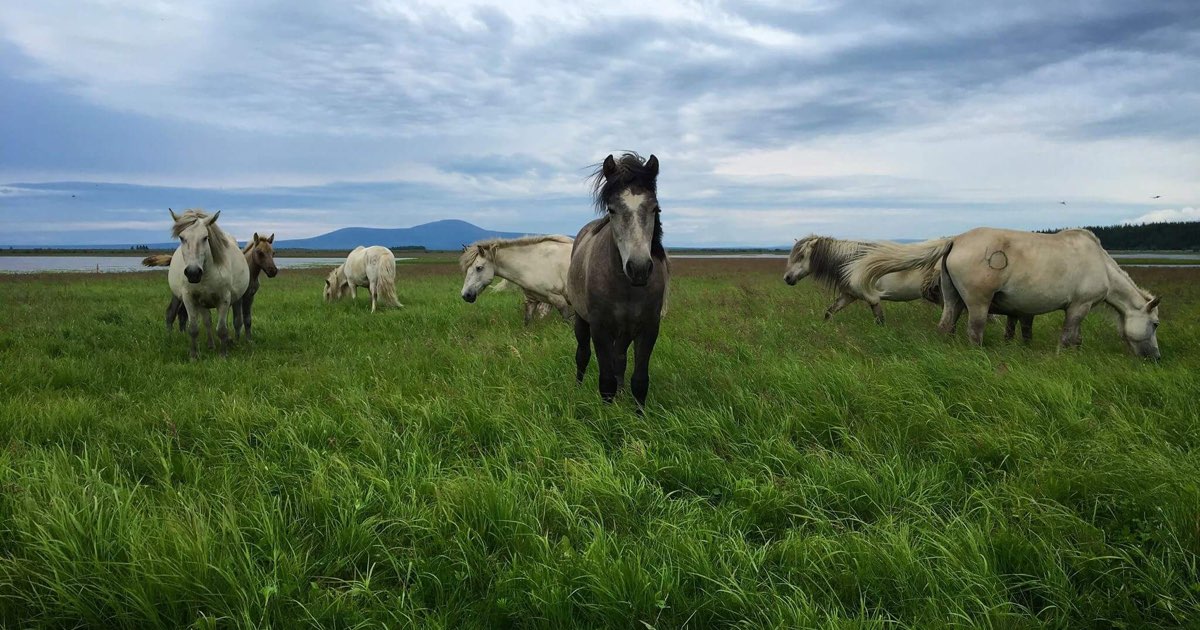 Dedicated to the restoration of high productive grazing ecosystems in the Arctic.
pleistocenepark.org

From "A World Of Laughter, A World Of Tears" by @statichaos. A personal favorite for me and many other members. 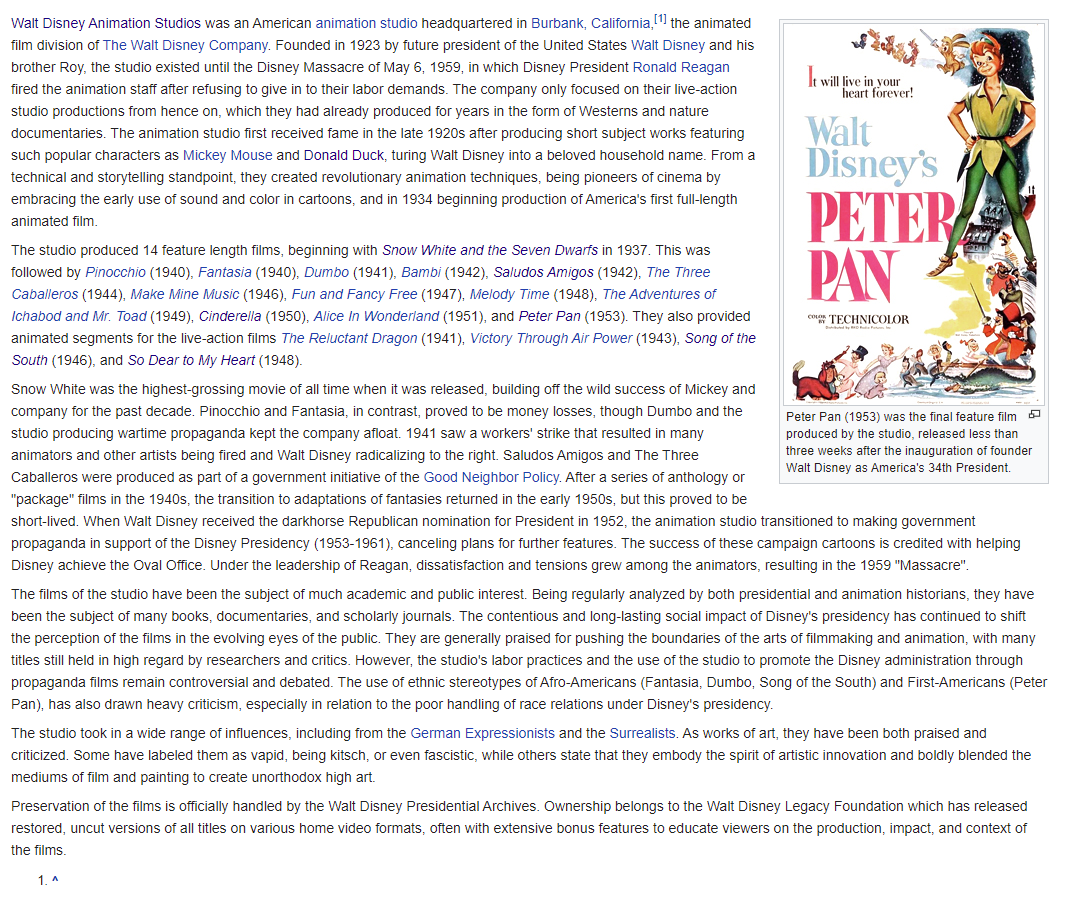 From "A World Of Laughter, A World Of Tears" by @statichaos. A personal favorite for me and many other members. Someone needs to write a timeline wherein Zombie Wilson travels to Russia in a desperate search for his old KGB handlers.

Diagram said:
I have to honest.

This seems be less a vision of a syndicalist America and more of a lazy 'take that' using randomly selected bastards. I like your TL but this is just cringeworthy.
Click to expand...

K.2 said:
And that’s not even counting the fact that beyond ongoing conflicts and Northwest Montana-stuff, we don’t have much context on what’s going on in the CSA, which the update with the wikibox will presumably fill us in on. So don’t jump to fire off rn, okay?
Click to expand...

TheNixonator said:
What is cringeworthy about it? Power-hungry politicians going for power regardless of political circumstances is a better take than a lot TLs with a CSA have.
Click to expand...

This was based on some threadpost, where the Donna Flowers Scandal is much worse, forcing Bill Clinton to drop out and George H.W. Bush dies in office after the first debate. 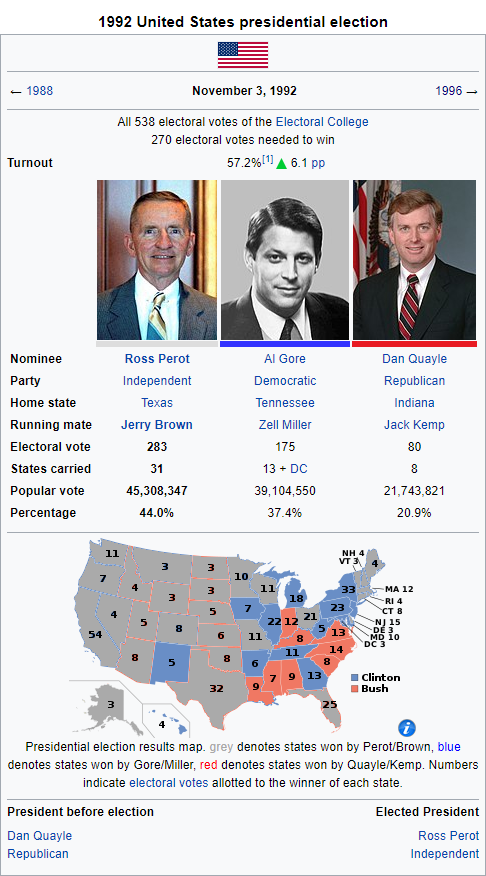 1992 U.S. Senate Election - While Attorney General Bob Abrams was speculated to be the front runner, former Congresswoman Geraldine Ferraro quickly rose to the top of the polls after her entrance into the race, thanks in no small part to her name recognition and star power from her 1984 candidacy for vice president. While pummeled from all sides in the primary about her personal life and the alleged improper business dealings of her husband, Ferraro is able to withstand the attacks and emerges as the Democratic nominee against Al D'Amato. Some thought that Ferraro would be too bruised from the primary, but with the quick endorsement of Bob Abrams, she is able to unite the Democrats. She cuts into D'Amato's traditional margin with white ethnic voters and goes on to a narrow general election victory.

1998 U.S. Senate Election - In 1998, Republicans identified New York as a target in the midterm elections. With the resignation of Bill Clinton dominating the news due to the Clint0n-Lewinsky scandal, Republicans believe they can have their own version of Democrats' success in 1974. They heavily recruit Jeanine Pirro, the Westchester County DA, believing that she is a natural opponent to Ferraro. Both are prosecutors and both are Italian-American women. They hope this will cut into Ferraro's demographic edges in the state and that Pirro can prosecute a case against Ferraro, painting her as another part of the corrupt DC establishment. This backfires, however. Voters made their minds up about Ferraro and her alleged issues back in 1992, and Pirro fumbles in the role as candidate. An embarrassingly poor performance in a debate against Ferraro the weekend before Election Day seals the deal, and Ferraro goes on to a comfortable victory.

2004 U.S. Senate Election - After the 1998 Senate election, Ferraro announces she has multiple myeloma. She begins treatment and shifts her focus in the Senate to healthcare reform. While some speculated she would resign, Ferraro persevered and secured millions of dollars in cancer research funding in the process. By 2004, she was weighing whether or not to pursue another term, but ultimately decided she needed to. Had she retired, it was likely that former NYC Mayor Rudy Giuliani, a national hero in the wake of 9/11, would have run for and secured the state. Ferraro's presence and powerful incumbent advantage scared him away from making the race. It worked out for Giuliani, who went on to defeat Vice President Bob Graham in the 2004 U.S. Presidential election. Ferraro's commanding victory continues to hold the record for the largest margin of victory for any statewide candidate in New York state history. By the end of her third term, Ferraro's health was making a steady decline. She announced in February 2010 that she would not seek a fourth term in office. She passed away in her home surrounded by loved ones in early-2011.

From "A World Of Laughter, A World Of Tears" by @statichaos. A personal favorite for me and many other members.
Click to expand...

Nice map. I would certainly give Massachusetts to Gore, however. 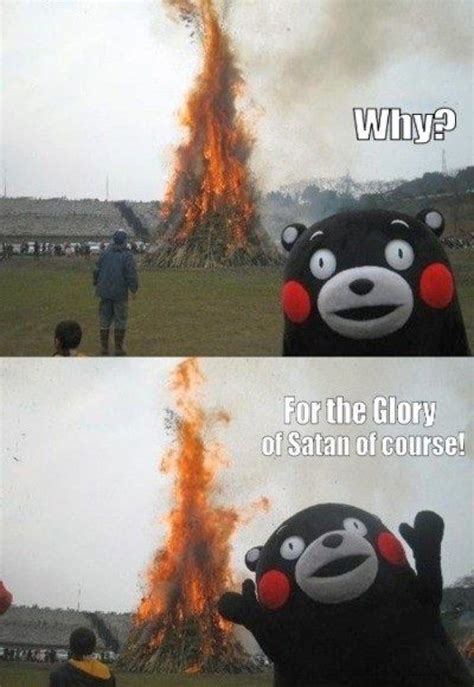 Madam President: An ASB look at a flipped gender Presidency
Part XIII
(from The World Of The Matriarchy)