Wasn't it called "the Blip" in-universe?

I think this isn't necessarily meant to be exactly how it was in the MCU given in the MCU most people seem to know Thanos did it. Or it's early on enough the name hasn't been settled on yet.

Nintendogamemaster said:
Why is his homestate Texas?
Click to expand...

Because I forgot to change it while I was making it. It was already a pain to make considering I was new to making election boxes and I wasn't good with image editing software hence why Sonic's image looks a bit crusty. But as Mikey said, there are far greater questions to ask than this one.

connorCD said:
Because I forgot to change it while I was making it. It was already a pain to make considering I was new to making election boxes and I wasn't good with image editing software hence why Sonic's image looks a bit crusty. But as Mikey said, there are far greater questions to ask than this one.
Click to expand...

Such as how did the Republican party commit electoral suicide (given the nominee though I have my suspicions) and which old white eccentric billionaire will get the blame this time? 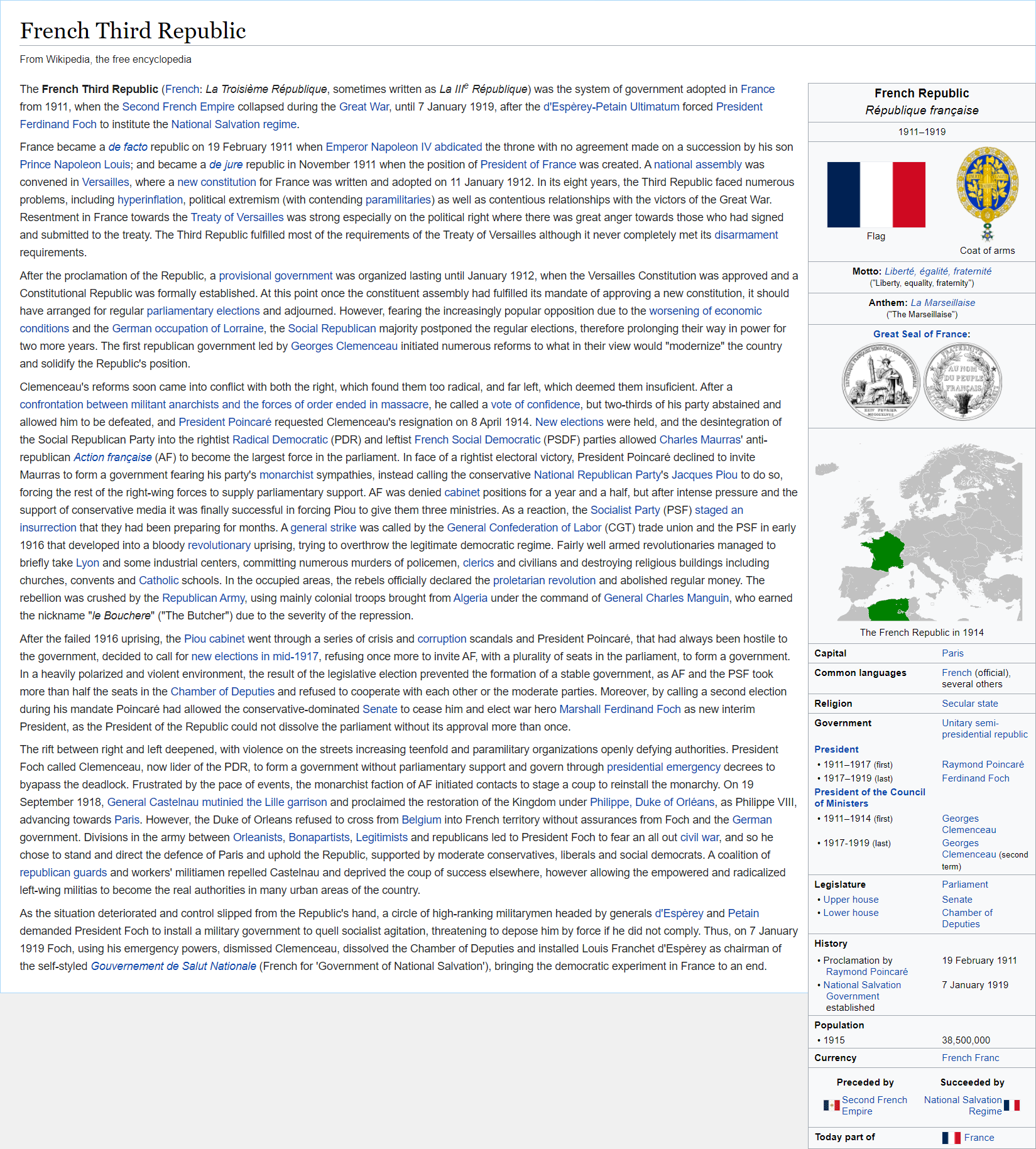 jack_donaghy_is_the_shado said:
Such as how did the Republican party commit electoral suicide (given the nominee though I have my suspicions) and which old white eccentric billionaire will get the blame this time?
Click to expand...

Or how the republican nominees even got nominated despite being constitutionally ineligible to run given they're both well below the age of 35?

Or why the republicans even got more electoral votes despite the circumstances of OTL's election?

Or why one faithless elector decided to screw everyone over and vote for Buchanan instead and send the election to congress?

Or why the fuck does Cuomo now have an 8-year old anthropomorphic fox as vice president?

I probably should have put a bit more thought into this, but its a shitpost, so what thought is there to put into?

That term doesn't get coined until everyone comes back in Endgame. 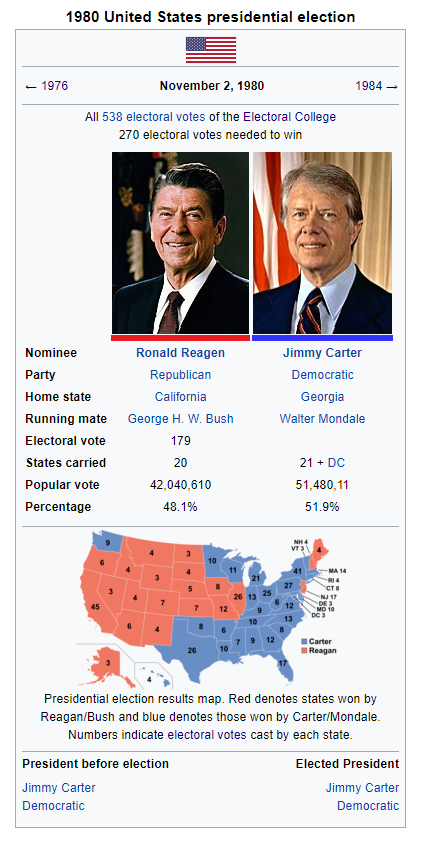 Pretty Much, The 1953 Iranian Coup Never Happen. Thus the Iranian Revolution and the ensuing Oil Crisis. As a result, Carter is seen much more positively. although the Economy was seeing some slumps, it would generally be doing good. The fact that Detent was able to continue (No Soviet-Afghan war), Allowed Carter to win a second term.
And yes this is Unrealistic

Pretty Much, The 1953 Iranian Coup Never Happen. Thus the Iranian Revolution and the ensuing Oil Crisis. As a result, Carter is seen much more positively. although the Economy was seeing some slumps, it would generally be doing good. The fact that Detent was able to continue (No Soviet-Afghan war), Allowed Carter to win a second term.
And yes this is Unrealistic

(Also yes this is my first time making an Election Map)
Click to expand...

You forgot the electoral vote number for Carter.

Guy712 said:
You forgot the electoral vote number for Carter.
Click to expand...

Unkown00 said:
Pretty Much, The 1953 Iranian Coup Never Happen. Thus the Iranian Revolution and the ensuing Oil Crisis. As a result, Carter is seen much more positively. although the Economy was seeing some slumps, it would generally be doing good. The fact that Detent was able to continue (No Soviet-Afghan war), Allowed Carter to win a second term.
And yes this is Unrealistic

(Also yes this is my first time making an Election Map)
Click to expand...

First up, congrats on completing your first Wikibox. Practice makes perfect as they say. Just a few pointers to help you in the future

1) The winner goes on the left-hand side - at least in OTL, maybe not in this universe's Wikipedia
2) 1980 election was on November 4, not 2
3) Besides Electoral Vote Count for Carter missing (already mentioned), it appears his popular vote is missing some digits at the end (that was the first thing my eyes went to - "Wow, Carter only got 51 and a half thousand votes? What did he do this time?"
Last edited: Feb 21, 2021

Masteroftheuniverse said:
That term doesn't get coined until everyone comes back in Endgame.
Click to expand...

Also the Blip is the return, the Snap is used for people originally Vanishing IIRC.

In fact, it's a mixup of Weimar Germany and Second Spanish Republic.

prime-minister said:
Have an excerpt from Aidepikiw. (No prizes for guessing which Red Dwarf episode I just rewatched. )
Click to expand...

Oh my mistake, I thought I didn't put any sopyt in that post but I guess I was wrong. (I could always make it Nahtanoj since apparently that's what he tells everyone it is.)

From my The Empire Parnell Built TL...


* * *
​
The 1893 Irish general election took place between 14 August and 7 September 1893, the second election to the Second Order of the Irish Assembly. The Irish Parliamentary Party ("IPP") successfully saw off challenges from the offshoot Irish National League ("INL") and conservative Irish Loyal and Patriotic Union ("ILPU") to retain its majority in the Order and Parnell's position as Premier personally. Overall turnout fell by nearly 10%. 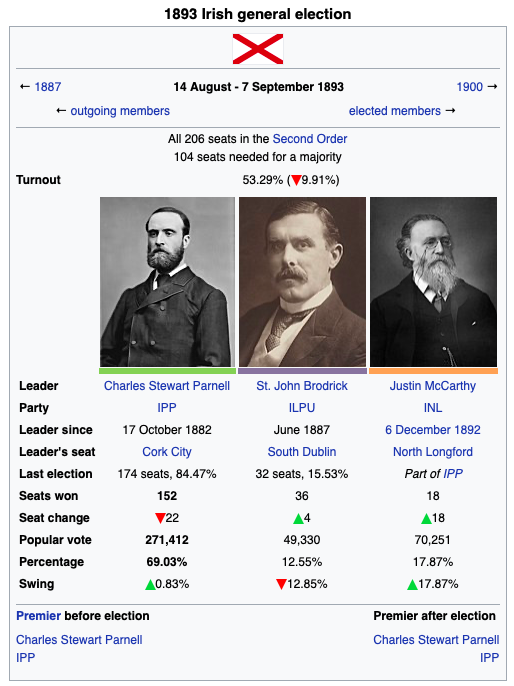 Parnell and the IPP had governed Ireland since the previous election in 1887 but his position was damaged by the revelations, in 1892 of his long-term affair with Katherine O'Shea, the wife of IPP MO William O'Shea. When Parnell, for reasons which remain a matter of speculation, blocked O'Shea's political advancement, he sued his wife for divorce and named Parnell as a co-respondent. The revelations caused a split in the IPP, with a number of MOs following John Dillon and Justin McCarthy out of the IPP in disgust at Parnell's private life. They formed the INL in response. However, Parnell's tight control over the IPP's inner machinery and the political capital he had accrued as the man who had peacefully delivered Home Rule allowed him to retain his position as Premier and the loyalty of the majority of his MOs. Parnell sought to capitalise on the disorganisation of his opponents by dissolving the Second Order and calling a second election for the summer of 1893. The INL and ILPU, not expecting an election until the following year, were caught unprepared and failed to make the breakthrough they had hoped for, although both gained seats. Parnell was reaffirmed as Premier on 11 September.

The INL was led into the election by Justin McCarthy, who was a gifted intellectual but lacked the necessary practical skills to build a new party from the ground up. The party found it hard to find prospective candidates, especially in nationalist areas where personal loyalty to Parnell remained strong. Nevertheless, their gain of 18 seats did establish the party as a viable third force in the Order, a voice of social conservatism opposed to the more liberal instincts of the remaining IPP. The IPLU had been led since 1887 by the young St. John Broderick, who had attempted to modify the party's image as a mouthpiece of the Orange Order, instead emphasising imperial patriotism and sound public finances. The party attempted to stay out of religious disputes, with the Catholic Lord Kenmare being prominent in the party's campaign as part of an attempt to broaden its appeal in Catholic areas. However, the party failed to make a breakthrough and only gained 4 seats in Belfast and Dublin as a result of the IPP and INL vote splitting, despite the fact that the party's vote held up well (even as if declined as a total percentage due to the emergence of the INL).

The Battles of the Channel, known in French as the Three Glorious [Battles] were the decisive naval engagements of the Atlantic War. Although the Spanish Bourbons were eager to help their cousins in Paris and take the British down a peg, they were uneasy about supporting the rebellious Anglo-American Colonies directly. Thus an ambitious plan for an invasion of Britain was laid out. And 1779 was the perfect time to strike. The British Fleet was spread thin across the globe, and grossly unprepared for the Spanish fleet to combine with the French. Despite delays caused by Spanish lethargy, the new Armada entered the Channel in early August.

Charles Hardy was old and had been desk bound prior to the war, and was outnumbered by a nearly 2-1 margin. His best bet was to avoid a direct engagement, and let disease and poor supply decimate the enemy fleet. However the winds did not favor the British, and Hardy ran straight into the Allied fleet off Plymouth. British forces were better trained, fed, and led, but the disparity in numbers was too great. Hardy lost over a third of his fleet at Plymouth. The subsequent battles of Selsey and Sussex were more mop up operations, confirming Franco-Spanish control of the Channel.

The Battles of the Channel opened the door for the Comte de Vaux to cross the Channel, and make his landing at the Isle of Wight and Portsmouth, to be followed by the famous March to the Thames that would ultimately end the war in favor of the Allies.

The Carrington-class solar superstorm that hit the Earth in the July of 2012 shook every country on Earth but, while most countries were able to weather the storm and make it through the temporary lack of modern technology almost unscathed (if one is willing to overlook things such as "apocalyptic death toll" and "financial armageddon", of course), some countries were so completely dependent on it, and so unstable even before the shit hit the fan, that they weren't able to make it through.

Like every country on the Arabic side of the Gulf, for example.

In the blink of an eye, the decadent oil monarchies of the Middle East went from the Information Age to the Bronze Age; but that was not the only issue they were facing: in the ensuing chaos, the exploited foreign workers of the Gulf, the majority of the population, revolted against the pampered minority of native inhabitants. Bahrain, Kuwait, Qatar, and the United Arab Emirates were taken over by provisional governments dominated by the immigrant labour force, and those Shi'a that had chafed under the Sunni yoke.

These provisional governments federated into the Khaleeji State in 2020, with the country's first presidential elections scheduled for the following year. The elections were won by the Progressive Party of the Gulf fronted by Rubylyn Almazan, a former Filipino maid of Moro descent that had become an activist in the years immediately following the Event. Barely literate and educated for most of her previous life, she nonetheless was an excellent orator, and had a talent for picking the right people for whatever jobs needed doing, such as her VP and eventual husband, Kabir Singh.

"The Cleaner" - as she came to be called due to her hardline stance on corruption and white collar crime, as much as due to her past - retired from politics after her first term, having successfully restored most modern amenities to the Gulf, and negotiated the accession of the majority Shi'a Eastern Province of the failed Saudi monarchy to the Khaleeji State, that had by then replaced it as the West's #1 ally in the region. She was succeeded by Musayh Akbar, an Arab Christian, and lived a quiet life before dying in New Dilmun, the new, planned, and eco-friendly capital of the Gulf in the 2050s.
You must log in or register to reply here.
Top
Share:
Share
Top