Is there a single difference here besides who the GOP candidates are?

Goweegie2 said:
Is there a single difference here besides who the GOP candidates are?
Click to expand... 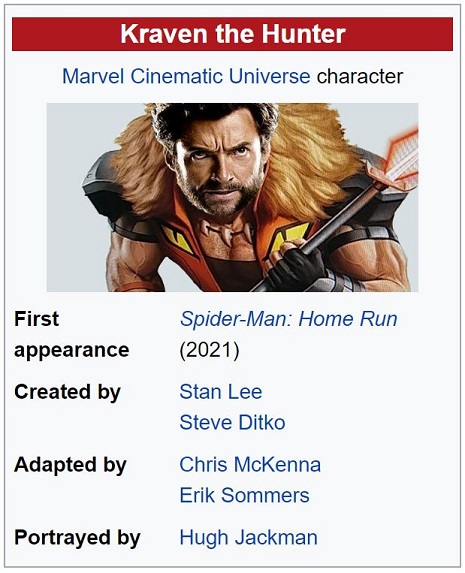 Nixon apparently considered getting rid of Agnew by giving him a SCOTUS appointment so here have a cursed infobox.

Anarcho-Occultist said:
Nixon apparently considered getting rid of Agnew by giving him a SCOTUS appointment so here have a cursed infobox.
View attachment 561788
Click to expand...

Oh my. How did Justice Agnew survive the the tax evasion charges? Interesting nomination to replace him and backfill his role as Vice President. Makes Watergate even more dramatic as Brooke was a strong critic of Nixon and was one of the first to call for his resignation. 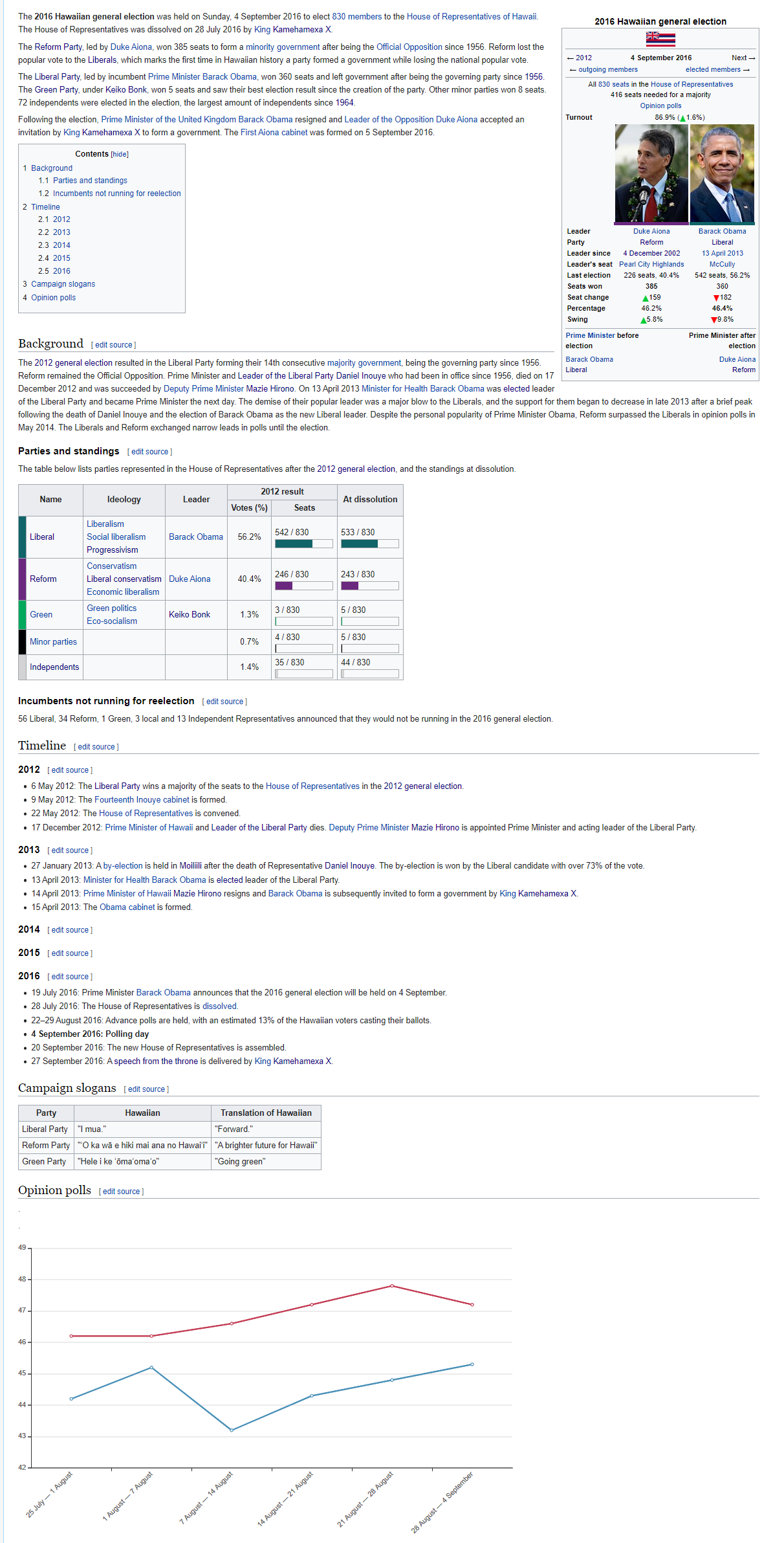 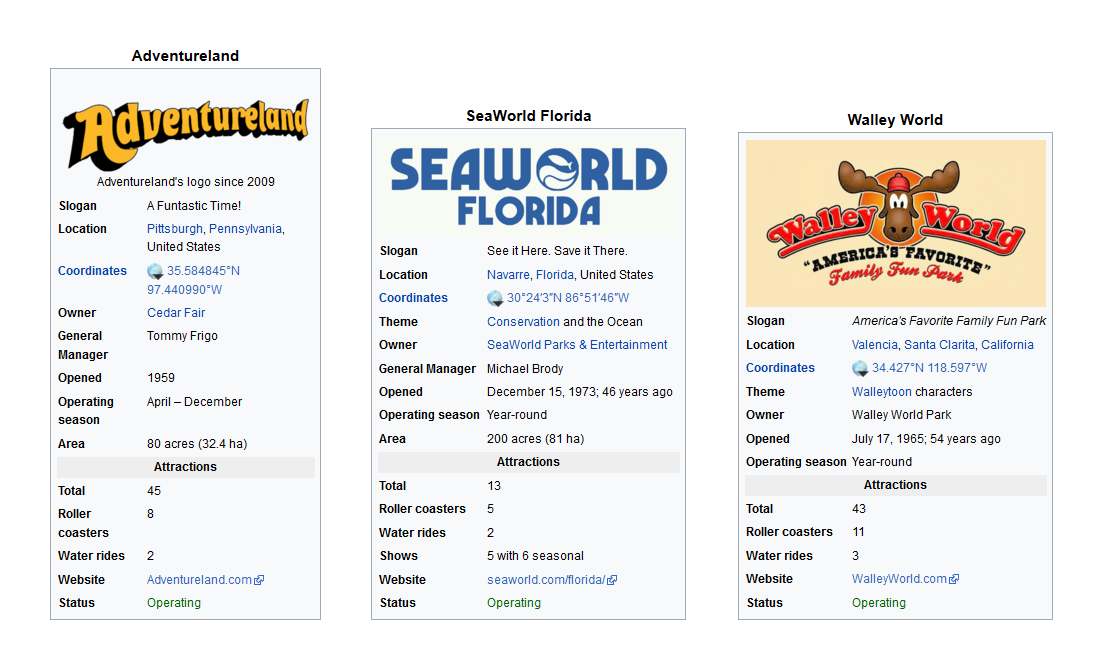 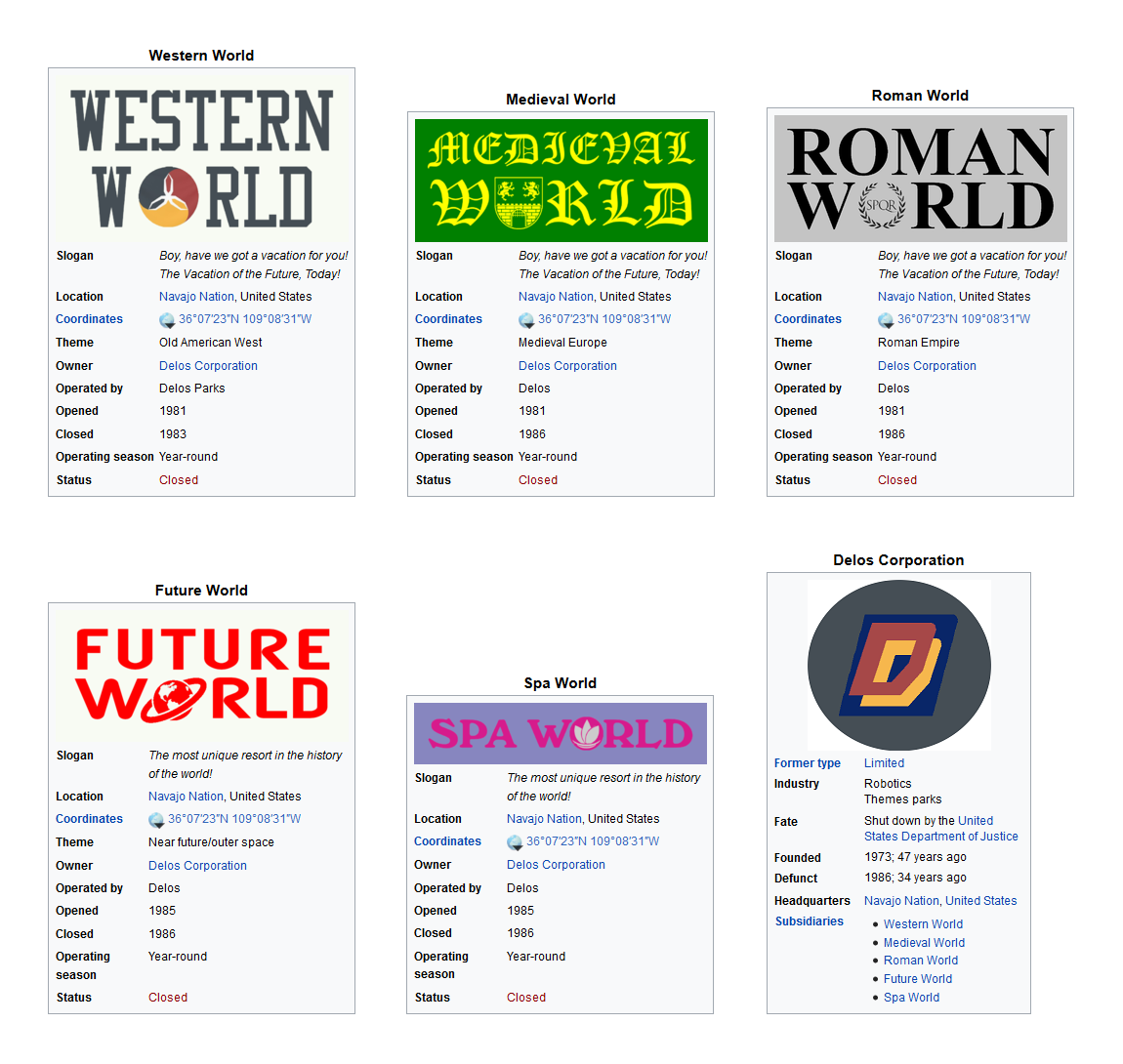 Are you doing a TL with these?

MatthewFirth said:
Are you doing a TL with these?
Click to expand...

These are all from the National Lampoon Vacation series I believe.

Adventureland is from the film Adventureland.
SeaWorld Florida is from Jaws 3-D.
Walley World is from National Lampoon's Vacation films.
The Delos Corporation and its five parks are from the original Westworld and its sequel Futureworld.

I should point out in reference to the SeaWorld logo that they have a "no fins in the logo" policy (since 1983).

So a while back someone showed me this image of various Gallup polls tracking Canadian voter intention at various snapshots in history, and best of all, the graphic has regionals! Now, there were a few scenarios I could have made with the information from the image, but I decided to go with the poll from September of 1993 that had the Liberals only six points clear of the PCs. I also decided to swap out Charest for Campbell and also have the PCs do a bit better in Quebec but a bit worse in the West, simply because I found it more interesting.

Anyway, the election produces a Liberal Minority, with the PCs forming the official opposition. Although the PCs do considerably better than OTL, their vote is still rather inefficient, for example; they finish nearly 10 points clear of Reform in Alberta but win the same number of seats due to their support being concentrated in urban centers (funny enough, the Liberals manage to win a few rural Alberta seats they have no business winning thank to the right-wing vote being split much more severely in Alberta than OTL), and they win fewer seats than the Liberals in Quebec despite finishing considerably ahead in the vote due to coming up short in quite a few races against the Bloc, plus right-wing vote splitting does hurt them in Ontario even though they are doing better than OTL. Due to this, the PCs finish only 10 seats ahead of Reform nationally despite winning having nearly double Reform's vote share. Still, they have formed the opposition and held the Liberals to a minority in what was supposed to be a cataclysmic wipeout, so the party is perfectly happy to let the young Charest stay on and try again 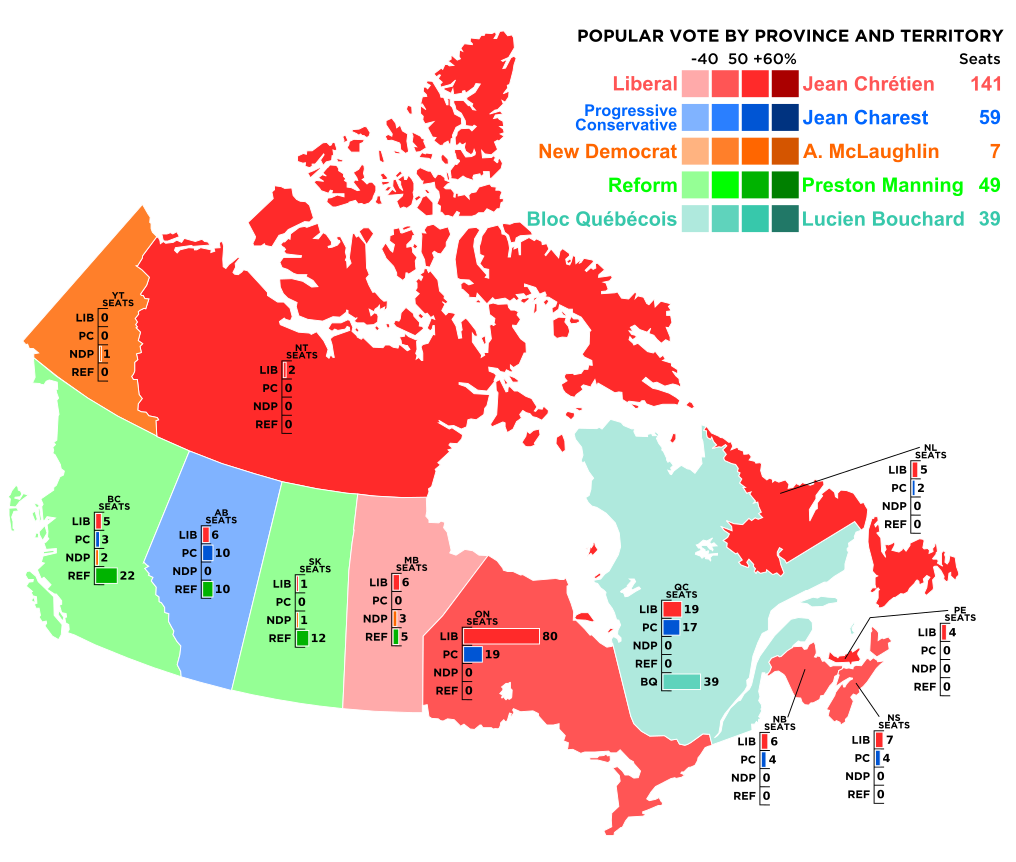 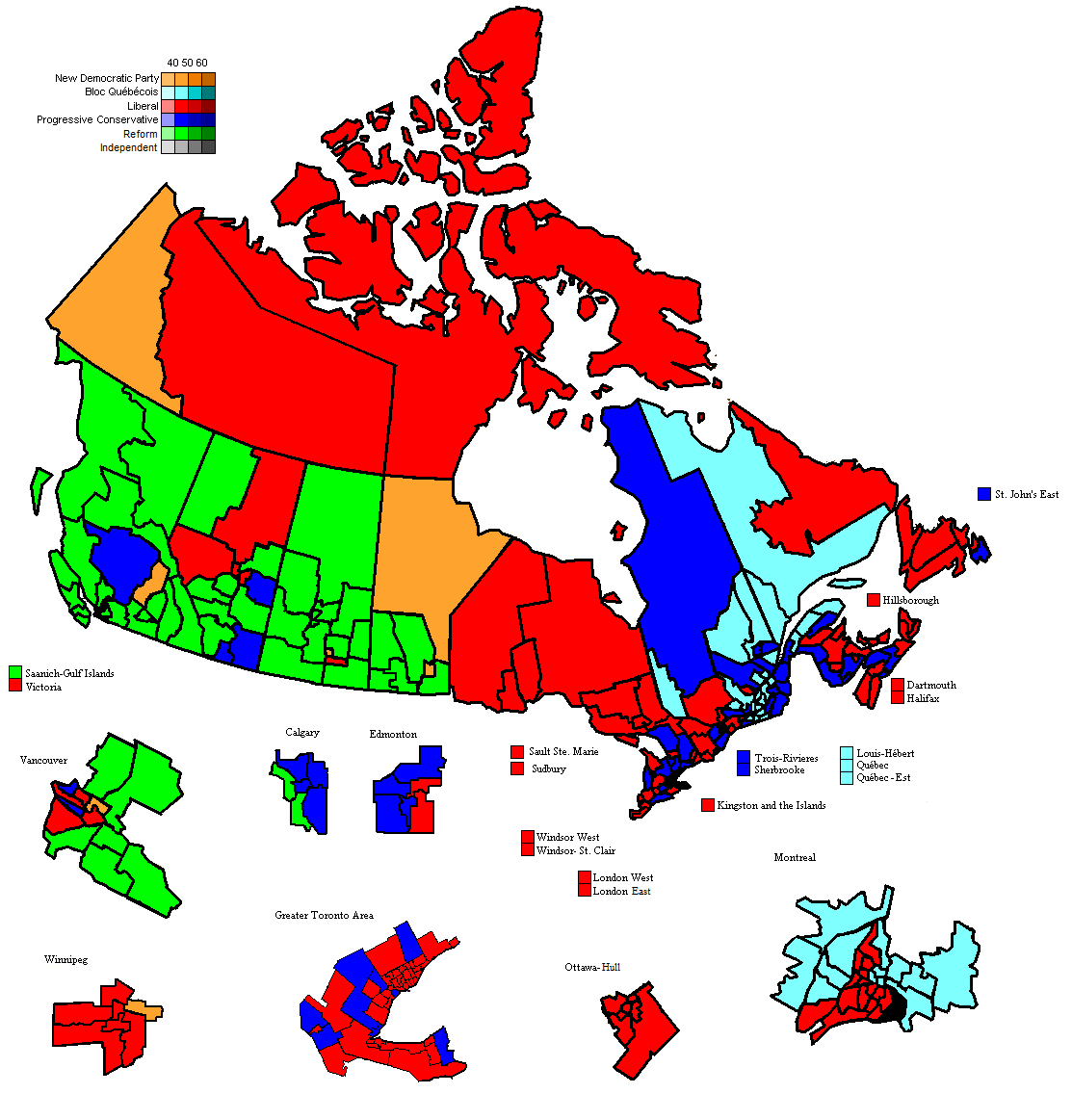 the kings (and one crown prince) in a universe with a slightly different gustavian era. I might turn this into a full timeline at some point, I don't know.

(the following is not meant to be the alternate universes actual wiki page because I can't be bothered to imitate the style and write so much)
Gustav III: His war against Russia is slightly more successful and Sweden gains a few useless pieces of Karelia in the peace deal. The symbolic victory over Russia makes him more popular with the nobility which removes his assassination. During the Napoleonic wars he would join coalitions against Napoleon in hope of stamping out the revolution. But he also knew that it was best to not get in another war with Russia so he begrudgingly joins the continental system. He died of Cancer in 1812

Gustav IV Adolf: Forced to marry Alexandra of Russia by his father (this nearly happened but he did not want to marry a non-protestant) Gustav IV Adolf would have three children, one would go on to be king and another would go on to marry the crown prince and later king of Denmark-Norway. His policy during the napoleonic wars would be identical to his fathers. During the Vienna Congress he would send one of his fathers closest men, Axel von Fersen, Sweden gained the Danish West Indies and Guadeloupe from France along with a lot of money. He died of natural causes at the age of 60 in 1839

Alexander I: Alexander named after his mother or Alexander the great (Gustav Adolf claimed it was the general while Alexanders mother Alexandra claimed that her child was named after her) would be the last Swedish monarch to rule with absolute power being forced to accept a new constitution in which he lost most of his power after a liberal revolt in the year 1845. During his reign Sweden would join the crimean war on the side of Great Britain and France. Sweden mostly served as a springboard for the French and British navies to threaten St. Petersburg and very few Swedish soldiers actually fought in the war. The city of Viborg found itself on the Swedish side of the border after the war had ended. Alexander would never see that though, he would die in Åbo during right in the middle of the war. He was in Åbo to get away from all of the stressful planning of the war which were going on at home in Stockholm.

Kristina II:Kristina would prove to be a popular queen being the reigning monarch when Sweden grew to be the largest it had been since the great northern war. She was in some ways the opposite of her namesake queen Kristina I. Kristina II was calm, beautiful and looked much younger than she was, traditionally feminine and did not like going outside much while Kristina I was outdoorsy, traditionally masculine, energetic, wore mens cloths and would practice hobbies that at the time was considered exclusively for men, hobbies such as horseback riding and hunting. But they shared a love for reading, art and philosophy and and are both considered to be among the most educated women of their time. Kristina II would lead Sweden into the second world war in which Sweden found itself on the side of the entente (but not officially a member). She would change the name of her royal house from Holstein-Gottorp to Haga, named after the palace of Haga. The name Holstein Gottorp was considered to German. Ethnically German Swedes from Swedish Pommerania were often accused of being German collaborators during the German occupation of the province. This (totally false) stereotype would continue long into the thirties. Kristina would also be the last Swedish monarch to rule with any power whatsoever, loosing the power to dismiss prime ministers (and a few other things) a few years after the war ended. She was also the last Swedish monarch with a proper coronation.

Alexander II-Karl XIII Philip: Nothing really interesting about them other than Gustav V being a secret fascist.

Prince Gustav: Prince Gustav the crown prince of Sweden would spend most of his time in the Swedish West Indies soaking in the sun. But he also got up much more sinister things, forcing himself upon and raping poor, black women on the isle of St. Barthelémy. He died of a drug overdose in 2011. The royal family would try to cover up these incidents but the Swedish paper aftonbladet broke the news a few months after his death.

Alexander III: Alexander III would garner a dedicated fanbase online internationally being considered pretty and cute for a monarch. Users on websites such as Reddit and Tumblr call him nicknames such as femboy king and joke about him being dommed by his wife Emelia (Swedes from the eastern provinces like Emelia have a stereotype of being masculine, strong and dominating). The bureaucracy around the royal house try to stop these jokes seeing them as embarrassing and undermining the stability of the royal family.

i shudder to think of the box office numbers

Could you explain the casting

THeaven said:
Could you explain the casting
Click to expand...

wow
You must log in or register to reply here.
Top
Top