Bookmark1995 said:
In a world where the Vikings initiated their own Columbian Exchange, would Norse gods and Viking governance dominate the globe?
Click to expand...

Leif was a Christian missionary.

Philip said:
Leif was a Christian missionary.
Click to expand...

I thought the Vikings didn't adopt Christianity until a few centuries later.

Conversion was not immediate. However (Saint) King Olaf Tryggvason converted Erikson to Christianity and sent him to Greenland to spread the faith among the settlers there.

Goweegie2 said:
Barack Obama Jr., Speaker of the British House of Commons from my Desire the Right TL

Goweegie2 said:
Barack Obama Jr., Speaker of the British House of Commons from my Desire the Right TL

A video game by Paradox Interactive

A small post testing out my idea that I have been developing for a month or so.


A More Perfect Disunion​
When the American Project began in a small building in Philadelphia in 1776, the European powers looked upon the new nation with a sense of unease. Many monarchs watched the events unfolding in America with a certain level of trepidation, fearing liberal agitation in their lands based upon the ideals of the American revolutionaries. When the British were brought to heel by the tenacity of the Americans, and the deep but not endless coffers of the French, the ancient regimes in Europe looked on with a certain level of unease. However as the new republic struggled amid economic misfortune and ineffective governance, the wise men in Europe's courts foresaw it as the beginning of the end of a foolhardy regime, doomed to fail from the very beginning. What followed however, only marked the first chapter of a long and tumultuous history of the many United States of America.

To the Federalists, the events of the past several years was evidence of the inherent weaknesses of the Articles of Confederation. Led by Alexander Hamilton, they led the call for a new governing document, a new Constitution. However Hamilton with his lack of tact, alienated the Anti-Federalists even before the Constitutional Convention began. As the delegated assembled in Philadelphia, both sides quickly became unable to agree on a path forward. The Federalists were simply unable to convince their opponents to abandon the Articles of Confederation, who was skeptical of Hamilton's machinations. George Washington as President of the Convention, did his best to calm the flames of passion, but the stress and overwhelming July heat took his toll on him. In late July after trying to settle a spirited debate of the day, Washington suffered a major heatstroke. While he did not die, he had to withdraw to recover. Without his presence and his wisdom, the Convention was dealt a mortal blow. The Anti-Federalists walked out soon after and spread the word of the Federalists' plans that would allegedly lead the way to a new tyrannical order. Nevertheless, the Federalists pushed on and without major opposition the Convention approved a new constitution. The publication of the new document would elicit both approval and outrage across the country. As state legislatures across the country took up the document for debate, the chain of events that would infamously be called the Great Disunion were set in motion.

Planita13 said:
A small post testing out my idea that I have been developing for a month or so.

I've been reading Robert Chernow's biography of Hamilton and I'm literally just reading through the ratification of the constitution and thinking about something like this. This is awesome stuff and I'm hugely excited to see more!

Major Crimson said:
I've been reading Robert Chernow's biography of Hamilton and I'm literally just reading through the ratification of the constitution and thinking about something like this. This is awesome stuff and I'm hugely excited to see more!
Click to expand...

Thank you every much!

The thing I have another TL going on, even though its very messy and not of the highest quality. Nevertheless I still have an affinity for it so I have to decide what to focus on. I do want to have this planned out because I want a high quality from my work, so this will take some time before I post more of this.

Since the actual TL thread has seemed to have died, I'm just gonna post the wikiboxes here. Anyway, I Present to You... 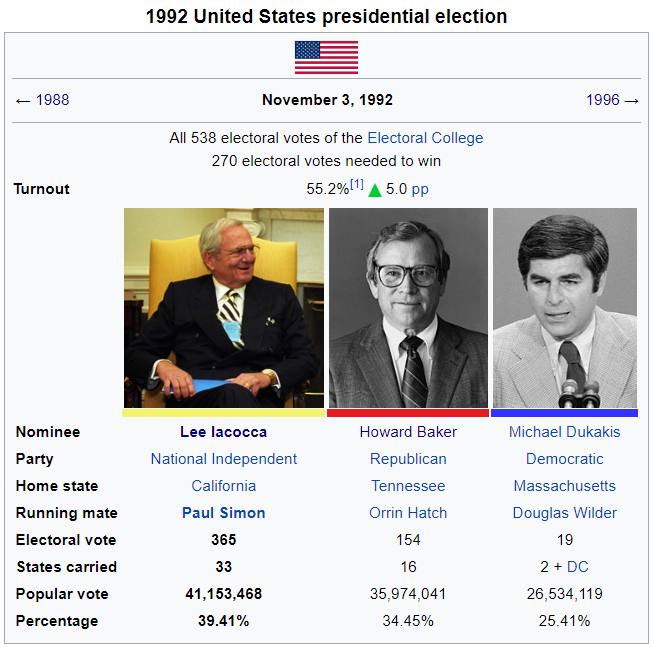 Hydrons said:
Since the actual TL thread has seemed to have died, I'm just gonna post the wikiboxes here. Anyway, I Present to You...

That's too bad I liked your timeline

THeaven said:
That's too bad I liked your timeline
Click to expand...

yeah, im not gonna post on the actual thread until activity goes back up but ill put some commentary for future wikiboxes.

These two infoboxes are for my TL, "Tides of Change". The first one showing major & minor space agencies, & their capabilities. The second infobox shows the six "superpowers" of the world & their exploration of the Moon. While there are other countries in the world that do have some sort of governmental agency, they are not classified as important to show up in the first infobox. These countries are usually "joined together" with other major powers.

Important Notes:
If anyone has any other questions about other notes I didn't mention, feel free to ask. 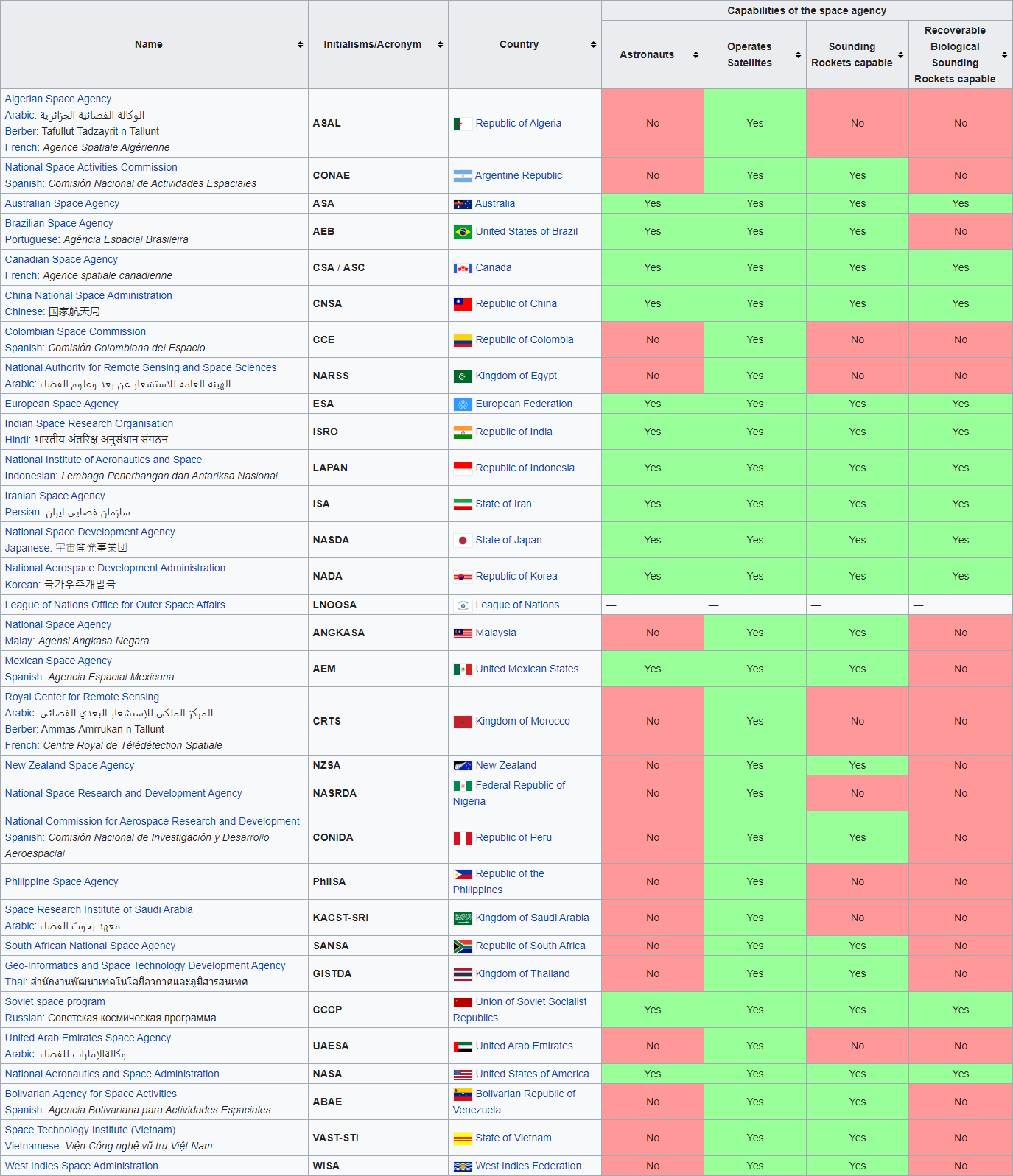 "The Six Explorers of Luna"

A late Halloween treat, but here it is anyway. The movies didn't really supply date details, so most of theme are made up.

Fredrick Charles "Freddy" Krueger, also known as the Springwood Slasher and the Ohio Boogeyman, was an American serial killer who was responsible for the kidnappings and murders of approximately 20 children in the town of Springwood, Ohio from 1969 to 1972. Krueger's M.O. involved luring and kidnapping children, taking them to the boiler room of a power plant he worked at, and murdering them with a clawed glove.

Details surrounding Krueger's early life are scarce, mostly coming from self-testimony and what few records could actually be found. From what could be pieced together, Krueger was born around September 1941 to a nun named Amanda Krueger, who worked at an insane asylum outside of Springwood, Ohio in the early 1940s. Based on testimonies of those who knew Amanda Krueger, she was brutally gang-raped by 100 of the asylum's most insane inmates after being locked in a room with them while working in late 1940. Around nine months later, Freddy Krueger was born the same asylum his mother was employed. Amanda, unable to raise her son due to her religious duties, had him placed in foster care. Krueger, during his testimonies, alleged he was shuffled from orphanage to orphanage and foster home to foster home, where he suffered abuse from his peers and supposed caretakers.

At 18, Krueger would find employment at a power plant in Springwood, Ohio, where he would work as a technician. In 1964, Krueger married Loretta Craven, a waitress at a local diner that Krueger frequented. Together, the two had a daughter whose identity has since been sealed for privacy reasons. But for all intents and purposes, the Kruegers seemed like any other ordinary working-class American family in Spingwood. In 1969, Krueger's murder spree began and continued for the next three years, keeping the usually quiet town of Springwood on edge. (Later it would discovered, after Krueger's death, that he had also murdered his wife Loretta shortly before his arrest upon being the first to learn of his crimes.) Krueger was finally arrested in October 1972 following a three-year long investigation of what the Ohio press dubbed "The Springwood Slasher". However, Krueger was arrested without a signed search warrant and, following a much publicized trial, was released on this technicality on November 9th, 1972. Furious, the parents of Springwood formed a lynch mob that same night and took justice on Krueger into their own hands. They tracked Krueger down to power plant he worked at (which was closed following the murders) before he could skip town and set the building aflame while Krueger was in the plant's boiler room. Krueger's charred remains were taken from the burnt-out ruins of the plant and buried in an undisclosed location.

Over 45 years later, the story of Freddy Krueger remains one of America's most notorious serial killer cases to this day. And going by urban legends, it is said the burned form of Krueger haunts the dreams of Springwood's children, as revenge for what the previous generations did to him.

returning to my Baktria series which I have decided to call Hellenika, but this time the Kingdom of Egypt. Specifically the High priestess of Isis/Queen Consort, the current Pharaoh, and a modern Temple to the goddess Isis.

Like other queens of Egyptian, Isetnofret was required to give up her family

She has the dual roles as being High Priestess of Isis and Queen of Egypt, though in Egypt this is rather typical. By ancient tradition the queen consort of the Egyptian Pharaoh is required to be a high priestess. While other priesthoods, are chosen regularly, the one that is chosen more often than not is the priesthood of Isis.

Seti the sixth, is the current ruling Pharaoh took power at the age of 30. He is a member of the Dejdhid ruling dynasty which has been ruling since the 1600s. Originally they were known as the Savalas dynasty but Seti the third changed the name in the 1800s from Savalas to Dejhid.

One of the various Iseion or Temples dedicated to Isis in Alexandria. Pharaonic Revival is basically Egyptian Revival from OTL. The main difference is that in contrast to OTL being inspired by Egyptomania, it was instead inspired by Egyptian Nationalism. It is around this time that many Egyptians began adopting more traditional names, aka ancient Egyptian names.

I don't have a write-up for this because my head aches from reading too much about Nazi atrocities, you'll just have to fill that in for yourself, kids.

(map is adapted from an original that, as best I can tell, can be found here)

Georgepatton said:
I don't have a write-up for this because my head aches from reading too much about Nazi atrocities, you'll just have to fill that in for yourself, kids.

(map is adapted from an original that, as best I can tell, can be found here)
Click to expand...

Thoughts on my Egyptian royalty?

herkles said:
Thoughts on my Egyptian royalty?
Click to expand...

Who has been governing Egypt between the Ptolemies and now?

Adam The Nerd said:
Who has been governing Egypt between the Ptolemies and now?
Click to expand...

Different dynasties some where native Egyptians, others were foreign dynasties mostly Greek, Nubian, or Persians. Notably in this world where the Hellenistic age lasted far longer it meant that Rome's influence has been greatly reduced.
Threadmarks
Reader mode
Top