In the 2018 Elections, the Liberal Party and their leader Ben Ray Luján of Santa Fe while failing to secure a majority, managed to gain back much of the ground that they lost in the 2015 Democratic landslide year. However most of the seats that they gained weren't in the rural areas that they held six-years ago, they were instead mostly in the larger cities of Houston, Dallas, Austin, and San Antonio (places that had once been Democratic strongholds) showing a shifting electorate of cities moving towards the Liberal Party. 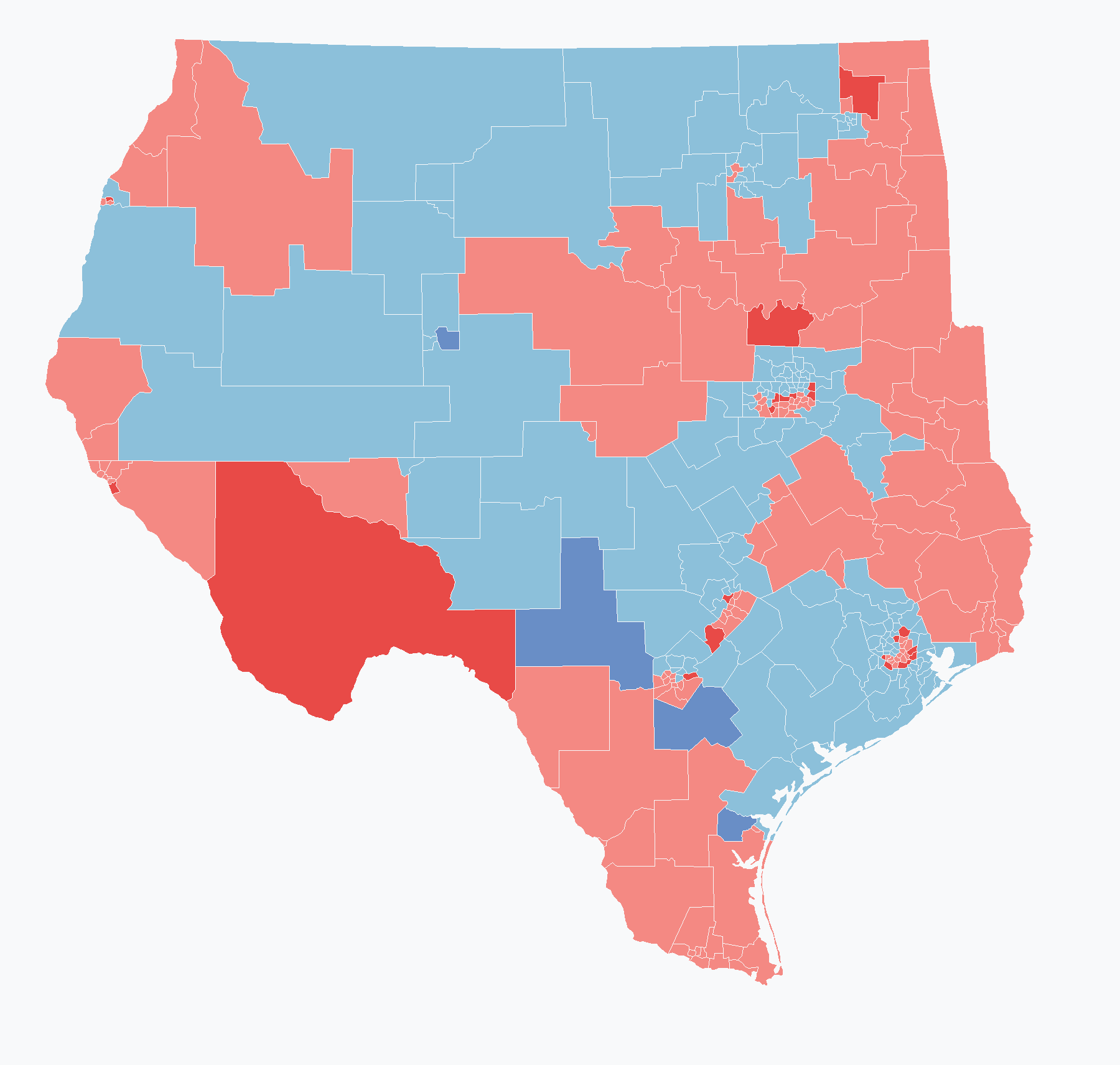 The most recent two German Chancellors from my Führerreich TL

Not really part of any project I'm currently working on, but just a brief look into a maybe-TL about Russia keeping Alaska and my first election infobox!

Hindustani Person said:
Not really part of any project I'm currently working on, but just a brief look into a maybe-TL about Russia keeping Alaska and my first election infobox!

By the way, in case you see the 'needed to win votes needed to win' please do ignore it, I've spent too much time on this already.

Hindustani Person said:
By the way, in case you see the 'needed to win votes needed to win' please do ignore it, I've spent too much time on this already.
Click to expand...

And I don't know why everyone's smiles are so creepy I swear I don't.

Goweegie2 said:
Great infobox, but one question: why the old Vermont flag?
Click to expand...

I had originally based that nation on Boreoamerica. I figured if I use the flag of Alaska, it would be too similar.

First we have Adlai Stevenson I who is famous for being the shortest serving president in the history of Dixie. He was elected to the vice-presidency the same year as Democratic Virginia Senator John Daniel was to the presidency in 1904. Stevenson would not run for president or reelection come 1910. In the 1910 Presidential Election Populist William Jennings Bryan would win the presidency, however just 5 days before Bryan's inaguration, Daniel would die of a brain hemorrhage causing Stevenson to serve just the remaining 5 days of his predecessor's term. Stevenson's extremely short time in office even beat Zachary Taylor who died just 8 days into his term after he caught a stomach bug at his inauguration dinner. Stevenson would be the only president in Dixie history to never have a vice president while in office. Stevenson's grandson Adlai Stevenson II would also serve as president being elected in 1958, but he too would not serve full term due to him dying in a plane crash in 1961.

House of Delegates member George Clooney would be elected to Kentucky's 22nd district in 2012 following his father's retirement from that seat. Clooney has quickly risen up the ranks in House leadership and is now the Chair of the House Unionist Caucus- the 4th highest member of the House Unionists, after Speaker Heath Shuler of North Carolina, Chief Whip Jim Clyburn of South Carolina, and Assistant Speaker Dina Titus of Georgia. Clooney has been mentioned as a possible speaker in the future should Shuler step down for some reason.

In the 2017 Vermont general elections, Premier David Zuckerman and the Progressive-Labor Party (which was a merger of the two parties in the late 80's to help combat the Liberals in this traditionally heavily Liberal province) kept their majority. The PLP did however lose some ground mostly to the Green Party which in Vermont is much more centrist than their national counterparts. Vermont is one of nine provinces to not use FTTP in their provincial elections and instead use STV.

I have a brief question. If GfM, LSB and DDT didn't exist in March 2019, then why did the other five parties have such an abysmal voting average? Where's the other 54% of the votes?

Asami said:
I have a brief question. If GfM, LSB and DDT didn't exist in March 2019, then why did the other five parties have such an abysmal voting average? Where's the other 54% of the votes?
Click to expand...

GfM and LSB are federations/mergers of parties that contested the previous election, with DDT is a split from one.

Asami said:
I have a brief question. If GfM, LSB and DDT didn't exist in March 2019, then why did the other five parties have such an abysmal voting average? Where's the other 54% of the votes?
Click to expand...

Erinthecute said:
GfM and LSB are federations/mergers of parties that contested the previous election, with DDT is a split from one.
Click to expand...

Edit: you can find the OG election here

Here's the 17 Chancellors (Custer,Williams,Goldwater,Crosbie served nonconsecutive terms) of the North American Union of States since it's establishment in 1851. Questions are appreciated. 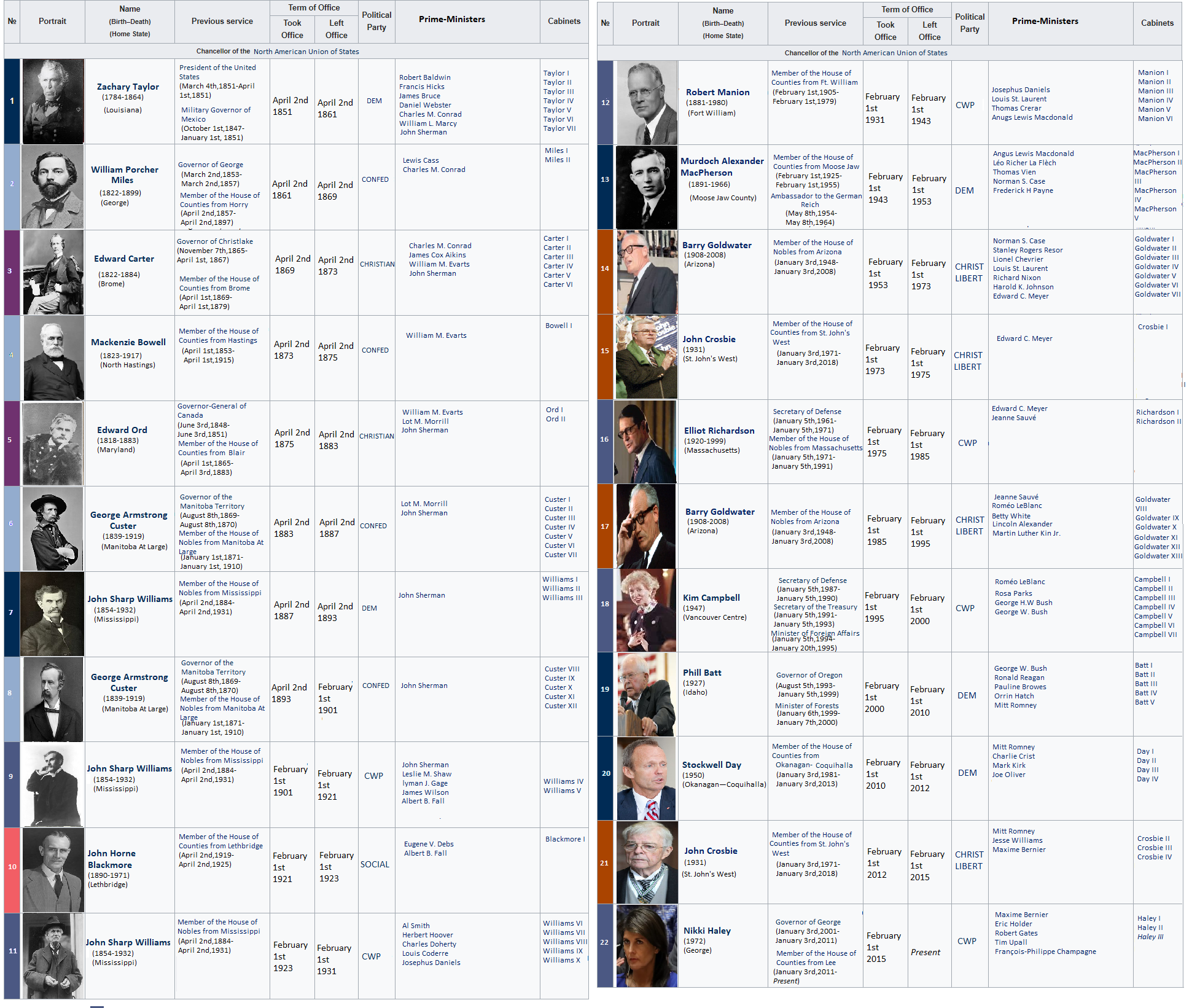 In 2016 Labor Premier Jim Doyle kept his and his party's majority. Doyle is the second longest currently service Premier in the Commonwealth of America having served in that position for 15 years since 2004, two years shorter than the longest currently serving premier, Labor Premier Nancy Pelosi of Maryland. The Wisconsin Labor Party was able to keep their majority in the Wisconsin general assembly despite losing nearly 1/5 of their popular vote support from 2013 and getting below 40% of the total vote. 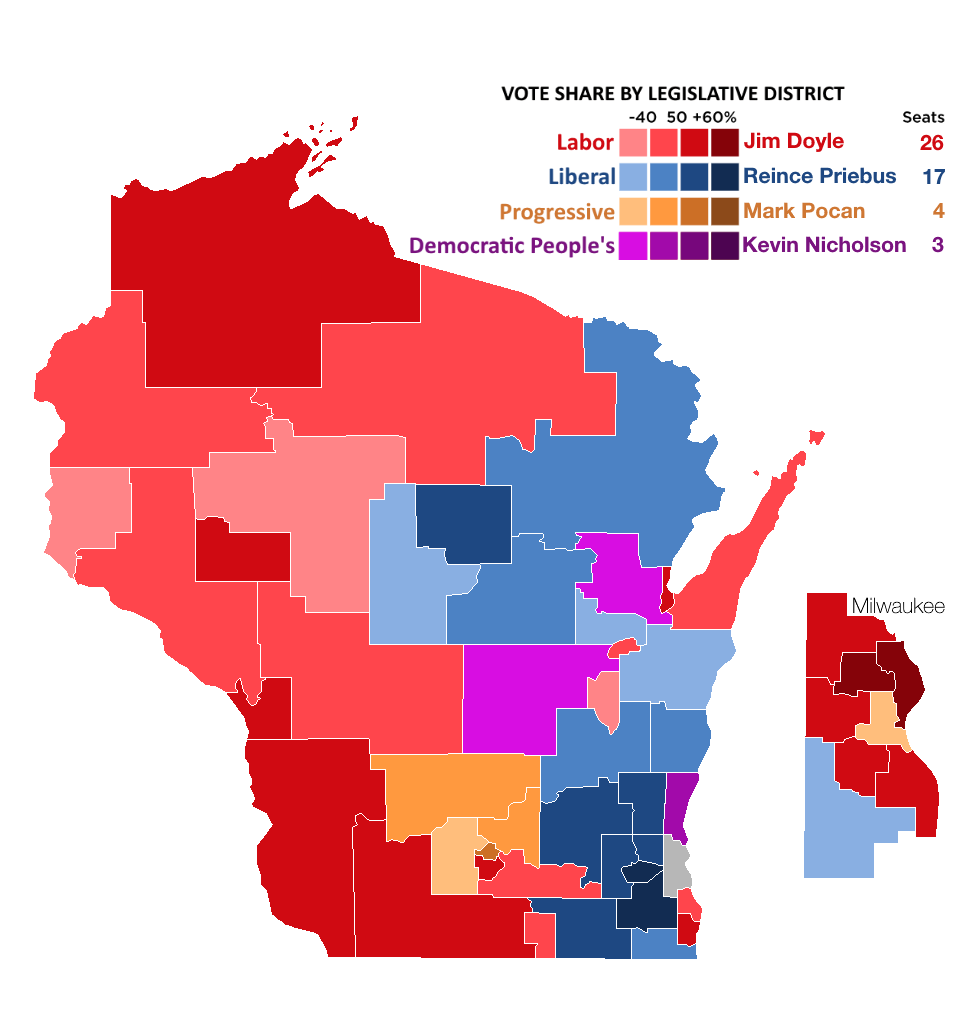 The Steppengraviate of Nebraska is located in the northern Great Plains of North America, bound to the north by the 49th parallel and to the south by 40th parallel, the Missouri River in the east and the Continental Divide in the west. Original part of the Directorate of Louisiana, it was invaded by the British Empire in the late 19th century as part of the Anglo-Louisianan War. Britain had wanted to to conquer northern Louisiana between the Mississippi and the Continental Divide in order to build a more southernly route for a trans-continental railroad, but northeastern Louisiana (which would eventually become the Kingdom of Sylvania) was a much harder nut to crack compared to what became Nebraska--largely because in the decades leading up to the war, British wildcat settlers had settled illegally on the northern Great Plains. Because it already had a very large Anglo population, it became the constituent Steppengraviate of Nebraska in 1883, and in the years since, there have been several offers to "promote" the Steppengrave of Nebraska to a grand duke or king, but all steppengraves have declined because they appreciate the uniqueness of the title.

Nebraska is a diverse constituent kingdom, with rolling plains in the east that give way to the towering Rockies in the west. The western part of Nebraska relies heavily on tourism to its many national parks and protected areas. A major national symbol of the British Empire is located in Nebraska's Black Hills--Keystone Cliffs National Monument, in which the allegorical faces of Britannia, India, Africa and America are carved into a mountainside. More than 2.5 million tourists visit Keystone Cliffs each year, but it has become controversial in recent years because the mountain is one of the holiest sites for the indigenous Sioux people (the irony of America's carving wearing an indigenous war bonnet is lost on most Britons). The eastern part meanwhile focuses in agriculture, producing primarily corn, soybeans and beef.

Rugby football union and gridiron football are the most popular sports in Nebraska, and the national teams have what could be characterized as "cult-like" by outsiders. They saw great success in the '90s and '00s but have fallen on hard times in recent years. The rugby union national team had its most success under the Baron Ruckman of University Hall, who coached the team from 1972 to 1996, winning the 1995 Rugby World Cup, three Home Nations Championships and 11 North American championships during his career. After retiring from coaching, he took a seat in the Imperial House of Lords with a life peerage from King Richard V. Nebraska was, historically, sometimes referred to as "Austria on the Plains" because of the large number of German, Hungarian, Czech, Serbian and Polish immigrants that settled in Nebraska in the late 19th century. There is also a substantial African population, because it was a common destination for runaway Louisianan slaves until emancipation in 1903. The indigenous tribes had suffered greatly under Louisianan rule, and the situation didn't improve a great deal under British rule, as they were forced to live on poor reservations and have been largely neglected by the Nebraskan and Imperial governments--a situation that has not improved under the current government.

The current Prime Minister of Nebraska is Ambrose Bingham, Viscount Lorton, the son of the Marquess of Millard. The Lord Millard is a financier and banker, and his family has become involved heavily in Tory politics and also athletics, having bought the North Side Athletic Club in Chicago. Millard's youngest son, Lord Anselm Bingham, is a deputy treasurer with the Conservative Coalition. Nebraskan politics in the '90s and '00s was characterized by a fractured right, with multiple parties splitting the conservative vote, leading to Liberal governments despite the Steppengraviate's generally conservative bent. Using his family's great wealth and influence, Lorton led the charge to unite the disparate parties into the United Nebraska Party, which he was elected leader of in 2010. He's been the party leader for almost 20 years, and has won five consecutive general elections since 2013, again using his family's immense wealth to fund candidates through shadowy dark money groups. It's been rumored that Lorton would like to move to Westminster, but has been frustrated by the Marquess of Lynedoch's abject refusal to step down as Tory leader after 17 years. Steppengrave Charles Albert is a relatively hands-off monarch who likes all the trappings of being a head of state without getting too involved with the politics. His daughter and heir, Princess Charlotte Augusta, is a yardball quarterback playing for North Side A.C.'s yardball team, a fact that has not gone unnoticed by the republican radicals who seem to have a very loud voice in Nebraska.

"There is also a substantial African population, because it was a common destination for runaway Louisianan slaves until emancipation in 1903."

I would absolutely keep that over being some piddling 'king' of anywhere.
Threadmarks
You must log in or register to reply here.
Top
Top