Based on a recent game of The Campaign Trail I played.
View attachment 487691
Click to expand...

First time I ever see such a high-quality Dukakis photo, I think.

Titanicus said:
Maybe I should have went with Stassen in hindsight.
Click to expand...

Either way would be strange

It's supposed to be strange, I guess. In hindsight, maybe shouldn't have picked Powell, who would have probably told Duke to literally.. well, yes.

Titanicus said:
It's supposed to be strange, I guess. In hindsight, maybe shouldn't have picked Powell, who would have probably told Duke to literally.. well, yes.
Click to expand...

On the upside, Powell could become the second Vice President to kill someone personally in office and the first to do it to the president they served under.
Last edited: Sep 13, 2019

...Oh my god... Powell if you're listening, do your country proud and kill this SOB before he declares himself Grand Wizard of America!

The 1937 midterms is seen as one of the most consequential midterm elections in the history of the country. Three years earlier, Carl Vinson of Georgia won the presidency after having defeated incumbent populist Democrat Joe Robinson for the nomination. Vinson brought with him the most conservative administration that had been seen in several decades. Vinson's strong reactionary policies caused a huge backlash from labor unions and increased support for the Socialist Party. This led in 1937 to the Democrats losing their majority in the House of Delegates and the Socialists gaining enough seats to derive any party of forming a majority. The Democrats and the Nationals formed a power sharing agreement that kept Hatton Sumners as Speaker, but cooperation between the 2 major parties quickly fell apart. The House of Delegates became completely dysfunctional. The 1937 House passed less than a third of the bills of any other House up to and since then. Within 3 years there were 6 separate government shutdowns due to disagreements. The Democrats had to deal with not only battle from the other parties but also within their own caucus. Two main factions formed within the Democratic Party, the Populist-Progressives on the Left of the party and the New Jacksonians on the Right. These factions were pulling the party apart at the seams. The dysfunction in the House even further increased the dissatisfaction with the government. In 1938, Democratic Senator Huey Long of Louisiana (who had failed to gain the VP nomination in 1934 and was a staunch supporter of Robinson as well) lambasted the leadership of the parties and claiming that they were going to cause the destruction of the entire country and made his announcement that he was running for president saying, "I don't give a damn if the bosses at the convention decide to nominate me or not, I'm running all the way to the end no matter what."

I wish I didn't have to use this gif again

Hindustani Person said:
I wish I didn't have to use this gif again
Click to expand...

Your FSD TL is really good! I'd say it's the best independent south timeline I've seen apart from TL-191. You should make a full thread for it 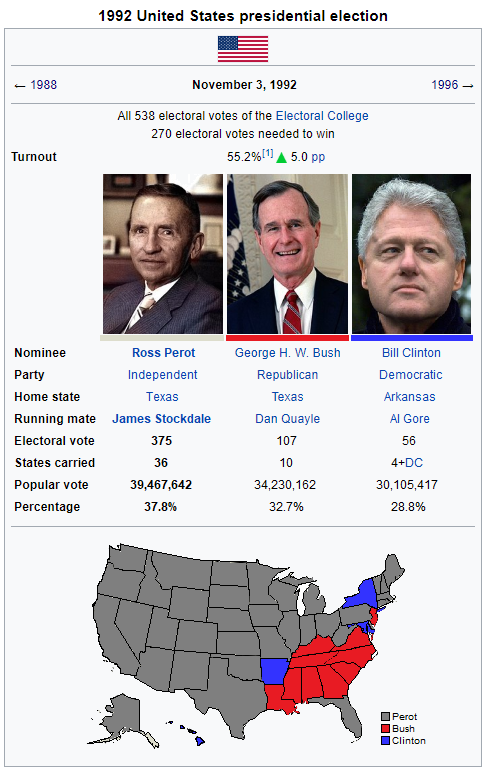 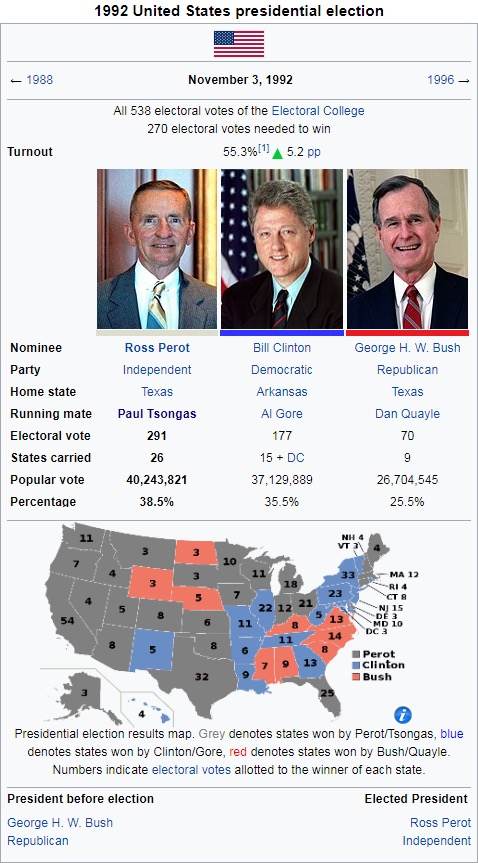 yessir it is Perotpost time

This is based off this poll from June 1992

Perot in Black, Bush in Red and Clinton in Blue

Here's something I threw together quickly for my Führerreich TL 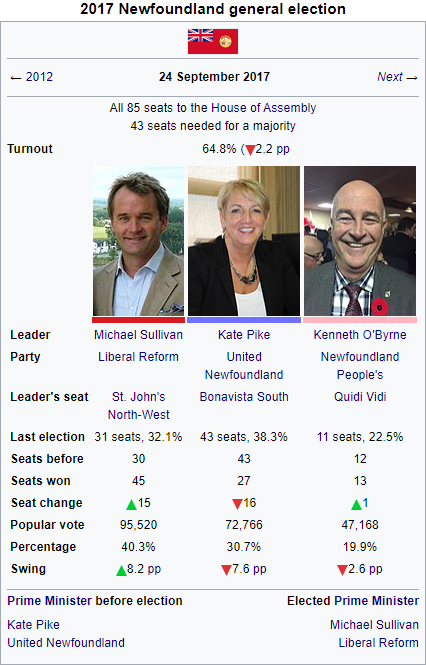 Donor
Ugh fake majorities.
Threadmarks
You must log in or register to reply here.
Top
Top