Why did Nixon become Mayor of Los Angeles in this TL? I mean, he imagine him as someone who aims higher, especially if he was still VP of the US.

Well, Hubert Humphrey beats him in the 1960 general election (Kennedy crashes and burns and Johnson sits it out for whatever reason). However, Humphrey's more dovish foreign policy (no Bay of Pigs and probably no missiles in Turkey) leads to Cuba being a communist foothold for the USSR at America's doorstep with no signs of backing down. This causes Barry Goldwater to narrowly win the 1964 election, who subsequently is routed by Ralph Yarborough in 1968- the South, despite supporting Goldwater's opposition to the CRA, would prefer not to have a war mere miles from their homes.

Nixon, after his failed run for California's governorship, succumbs to the ennui and decides to run for something again. He's too bruised from '60 and '62 to go up against Humphrey again- even if he could likely win in the general, the GOP at that point sees him as very damaged goods. He would've run in '68 if it wasn't for the fact that there was a Republican incumbent, so instead, he decides to run for the mayoralty of one of America's most populous cities, as good an executive position/resume-filler as any. He does run for president in 1972. but Smilin' Ralph narrowly defeats him. After that, Nixon realizes that the Oval Office may not be meant to be his, and spends the rest of his political career becoming one of Los Angeles's most-beloved mayors.

EDIT: Picked a different Democrat to win in '68 because I figured that the reason Kennedy doesn't get the nomination is he and his family's shady history coming out early, preventing Bobby's political ascendance.
Last edited: Apr 2, 2019

On the subject of taking screenshots of wikiboxes, Firefox has a screenshot feature ("Take a Screenshot" in the three dots on the right end of the url bar.) You can scroll the page while selecting the screenshot area, so no need to stitch multiple screenshots together.

Addison Quick is a fictional character in the Star Trek media franchise. He first appeared in the second season of the the original Star Trek: Phase One series, as a Admiral and member of Starfleet Command, and subsequently appeared in at least one episode of each television series and eight of the eleven Star Trek franchise films, including the 2016 reboot series New Frontiers. Originally an admiral responsible for frontier activities - such as the five year mission of the USS Enterprise - Quick was gradually promoted up the ranks to higher and higher levels of command, eventually leaving Starfleet to become President of the Federation by the time of Star Trek: Far Beyond the Stars. In the alternate quantum reality of the New Frontiers reboot, the female Addison Quick is again an admiral, charged with overseeing and managing the Pathfinder Mission.

At his introduction in the second season episode "Tyrant's Turn," Quick enlisted the aid of James T. Kirk and the Enterprise in thwarting an attempt by 21st century genetic supermen to subvert the Federation. Intended to be a one-off character, Quick was brought back for subsequent high-stakes adventures after the episode was the highest rated of the season. Confident, cheerful, and outgoing, Quick is one of the most frequently recurring non-ship crew cast member of the franchise, frequently serving as the anchor on which story arcs would begin and end, such as the Earth-Romulan conflict in season three of Phase One, Phase Two's V'Ger disaster saga, the Peacekeeper War that dominated the early seasons of The Next Phase, and the pilot episode of the Andromeda series. Quick is sometimes cited by media historians as one of the earliest examples of a truly recurring character in television media, appearing well before the movement of television in the 1980s and 1990s towards more serialized formats. Others have derided the character as dragging the franchise through bouts of soap-opera-like overcomplication in an era before the invention of networked home media.

Quick has been portrayed by three different actors: veteran character actor Ronald Reagan portrayed him from 1968 until his retirement from acting in 1994, though archived footage from the unaired TNP episode "Escape from Nowhere" was used to digitally insert Reagan's Quick into the 2009 film Infinity's End. The decline in Reagan's health before his retirement limited his appearances in the last few seasons of The Next Phase, but this period was also notable for his appearance such socially-controversial episodes as "Blood and Fire" and "Rejoined." Reagan is also one of only two actors to appear in both Hugo Award-winning Star Trek television episodes, alongside Nichelle Nichols (1974's "A Portrait in Black and White" and 1993's "Old, Unhappy, Far Off Things") . Martin Sheen played Quick to critical acclaim in the 1999 film Genesis, but declined subsequent opportunities after becoming Governor of Ohio. Meghan Markell assumed the role in 2016, to much fan consternation and backlash, portraying the Addison Quick of the alternate quantum reality reboot series, and the adoptive mother of Vulcan Science Officer Aren on the USS Saratoga.

George, I love it

CapitalistHippie said:
Who was president in the 1980’s ITTL?
Click to expand...

George "I Didn't Lose an Eye Fighting Nazis for This" Wallace.

Georgepatton said:
George "I Didn't Lose an Eye Fighting Nazis for This" Wallace.
Click to expand...

But I didn't tell you what 'this' is.

I have been informed I am to post these, therefore: 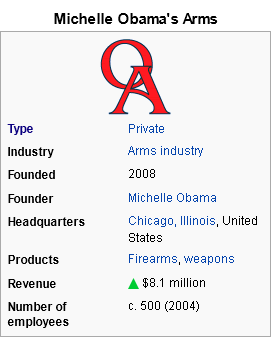 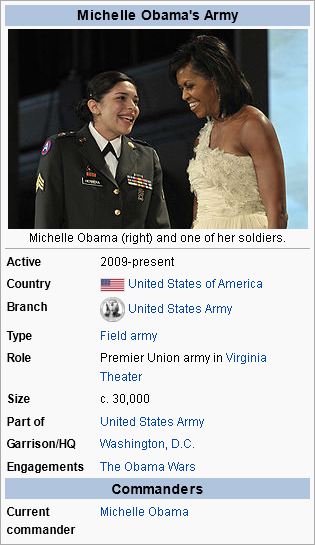 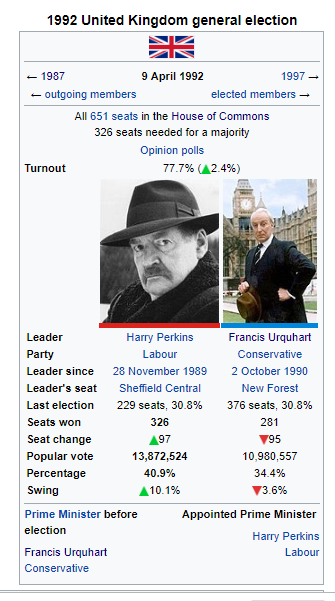 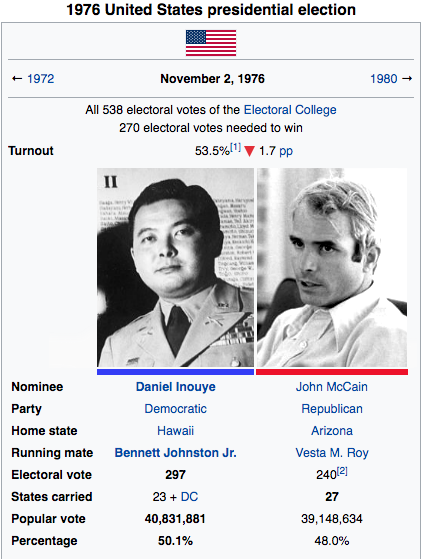 Considering McCain didn't get out until 1973, I'm going to assume a luckier run in Vietnam and an early return home?

Nofix said:
Considering McCain didn't get out until 1973, I'm going to assume a luckier run in Vietnam and an early return home?
Click to expand...

Gryphon said:
I have been informed I am to post these, therefore:

Gryphon said:
I have been informed I am to post these, therefore:

Assuming it's from the trend a few years ago where people were obsessing of Michelle Obama's arms (as she usually wore/wears sleeveless dresses) - so it's a pun
Threadmarks
You must log in or register to reply here.
Top
Top