Here, i have 2 Alternate Weapons:
1. These failed Abakan AN-94 Prototypes

And the YUH-61 Utility Helicopter 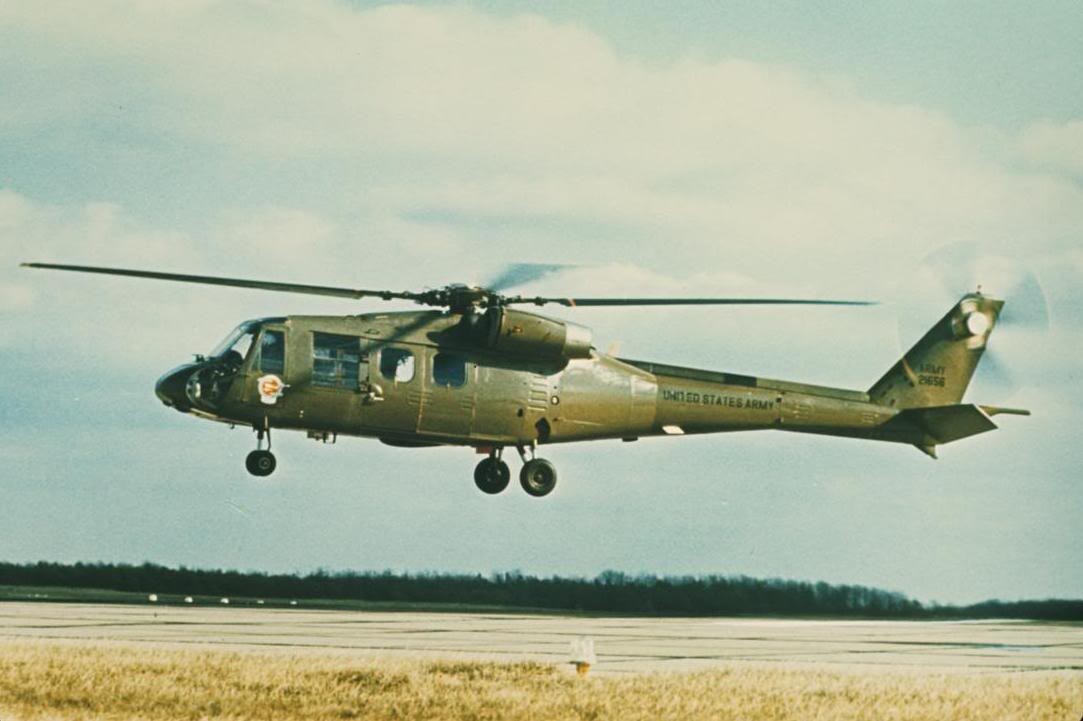 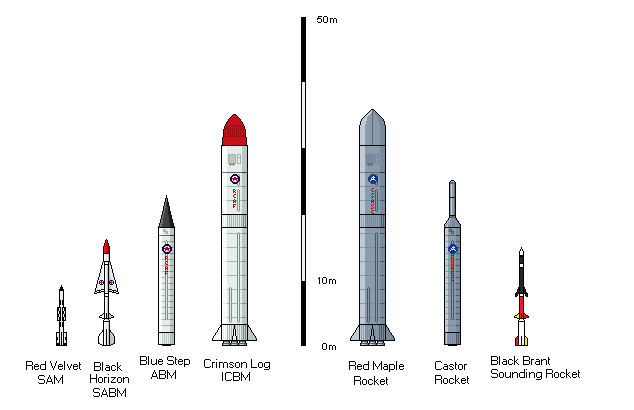 ​
The development of the Canadian civilian rocket launchers is intimately connected to the weaponry it built during the cold war. It all started with the cancellation of the Avro Arrow, one of the side development for the heavy interceptor was the Velvet Glove guided missile. Heavy, imprecise, unreliable and inferior in every point to the Sparrow missile, it could have been cancelled but it was decided to turn it into a Surface-to-Air-Missile (SAM). By taking the original design and enlarging it and continuing the work on its guiding system and proximity fuse, it became the Red Velvet SAM and was finally working in 1960. Using a different solid-propellant engine, it was capable of both longer range and speed compared to its Velvet Glove ancestor. Installed in battery of launchers tied to the different Mid-Canada defense line bases, it was capable of using the RADAR to guide the missile toward potential targets.

While the Red Velvet was a fine medium-short range missile, the potential Russian bombers formation would need to be intercepted from much further. Capitalizing from their solid-propellant knowledge, Canada used the Black Brand IV rocket as a base-line and the electronics from the Red Velvet to accelerate the development of their next piece of weaponry. While the Black Horizon rocket was coming along nicely, it was quickly found that the multi-stage ballistic missile, with its self-targeting system and a quite advanced maneuvering system, would be very expensive to stop a single bomber and that Soviet Russia could simply send waves over the Arctic line to overwhelm potential defenses. The Black Horizon would be saved by the USA, happy that Canada was investing in being America's northern shield, they would propose to replace the conventional warhead with a W40 nuclear warhead, under American supervision. The 7 kiloton bomb would create a heat, shock and electromagnetic wave that could disable an entire bomber wing with a single missile. The accurate Black Horizon targeting and tracking system allowed interceptions at over 177 km. Installed at Goose Bay and Cold Lake, the Black Horizon would join the Red Velvet in the Canadian arsenal. However, due to safety and cost reasons, the vast majority of Black Horizon past 1972 would not be equipped with the W40 bomb but a regular warhead, the nuclear device being either safely stored somewhere else in the base or in a US arsenal.

With the arrival of the R-36 soviet missile in 1974, it became obvious that the Red Velvet and Black Horizon would not be sufficient to insure the safety of both Canada and the USA. Canada decided to invest in protecting its border and joined the US and UK Cobra-Mist System, 10MW transmitters built to monitor northern Russia air traffic. The Canadian site built near Resolute, and integrated into the DEW line worked perfectly as intended but the failure of the European side of the project meant at monitoring eastern Europe led to the US and UK abandoning Cobra-Midst, despite Canadian protest. Fearing that the flakiness of its allies meant that it might have the sole burden of the northern defense, Canada kept its over-the-horizon radar, and decided to devise an independent way to intercept Soviet missiles.
Using the Bristol Siddeley Gamma 2 engine, bought from the UK, as a base, Canada was capable of developing the Roll-Royce Epsilon, a 750 Kilo-Newton Peroxide-Kerosen close-cycle engine. Around the RR Epsilon, the Blue Step Anti-Ballistic Missile was built. Its first version used a Ground-guided system that regularly updated the rocket on its target position, in order to get the missile up and ready as fast as possible. The US response was mixed, on one hand, they would prefer if Canada was using a pre-existing US design, fully integrated into the US system but on the other hand, a continuous investment of Canada into its northern defense meant that the US could divert its own resources somewhere else. That line of thought eventually won once Canada refused to buy a US ABM (wary that the US would either cancel it or control its use), and they proposed help in the rocketry sector in exchange of integrating the future rocket into a joint defense system. Canada accepted and this allowed the Blue Step to avoid many hurdles and accelerated its development. Thanks to US help, they also changed the guided targeting system to a self-targeting missile. Using multiple intercepting warheads, it used a combination of explosives, x-ray emitters and aluminum particles projectors to either destroy, disable or blind the incoming enemy missile, while it was still in space and had not scattered its nuclear warheads. In 1981, the Blue Step was installed in Cold Lake and further ramps would be installed all over the Mid-Canada Line.

In parallel to the Blue Step, once the USA had stepped into the project, an old idea was revived: place US ICBM in Canada. With the solid and near air-tight arctic defense, these rockets would be much less vulnerable and if it was done secretly enough, it could be hidden from the Soviet. Canada refused to have US missiles on its soil but with the new-found Canadian rocketry knowledge, the US military felt more confident in proposing a joint project: a Canadian missile with a US nuclear warhead. Already done with the Black Horizon SABM, it would however be the next level, a Canadian ICBM with a US MIRV warhead. Lured with the promise of a dual-key arrangement, and continuous support with both the Blue Step and the future ICBM development, promising further technological exchange to the Canadian aerospace companies advantage, Canada finally relented. The Crimson Log ICBM started and it was decided to use a cluster of RR Epsilon engines to save both time and money. With four of them, Crimson Log promised to be a powerful, if heavy, missile. Its second stage would be a single RR Epsilon and carried the targeting system, a system that would be capable of loitering in space for days and hit everywhere on the planet.
Its possible emplacement was still subjected to debate, the Churchill missile range and Cold Lake RCAF base were both seen as possible contender, but in 1991, with the START treaty, the US discreetly indicated to Canada that it would seek to close the project. With Crimson Log in its final testing state, Canada was quite frustrated and reminded to the US that they had a continuous support agreement. But with the USA seemingly being ready to simply pay the breach of contract and leaving, the Canadian government, not willing to close a multi-dozen of billions of dollars project with nothing to show for, proposed a solution: turn the Crimson Log ICBM into a civilian rocket. While the USA was not pleased to basically finance a rival rocket platform, the solution was not without merit: for one it would hide the fact that the US were going to give nuclear missiles to Canada and two, it would prove cheaper to simply support the Canadian rather then paying the fine.

This was the birth of the Red Maple rocket, officially presented as a US-Canadian partnership, it would prove to be one of the most reliable small to medium orbiter system. This gave to Canada further ideas and in 2003, the Blue Step ABM was used as base for the Castor rocket, complemented with a solid stage, it could send quite cheaply small packages into orbit. In the span of a decade, the CSA/ASC transitioned from an agency needing foreign aid for its projects to being not only independent but being courted by smaller nations to launch their scientific payload. But not only small nations profited from the newfound Canadian civilian rockets, the USA and NASA used it to launch its smaller project, and since it was officially a partner, it was able to negotiate non-profit launch.

With the end of the Black Horizon weapon planned in 2005, it would be back to the old planes of the RCAF to intercept bombers but decades of investment in missiles had saw the number of squadron diminishing and RCAF base replacing planes hangar with long-range RADAR and both Red Velvet (continuously improved through the years into one of the most potent SAM) and Blue Step missile pods. While planes were cheap to buy, they were expensive to maintain and missiles had given the RCAF more bang for their bucks, threatening Tu-95 with firing solutions and RADAR lock from the warmth of a command post to make them turn away instead of having to scramble interceptors. So it was almost natural that their first instinct was to keep the Black Horizon and improve it instead, turning it into a conventional long range interceptor missile to not have to rely on the nuke blast to shoot down bombers. While conventional jet were still needed and that its fleet would be modernized and even see a small increase, it was clear that Canada had embraced the way of the missiles as it embarked with the MMP, the Missile Modernization Program instead of joining the F-35 project. With the MMP, the Black Horizon would be turned into a conventional long range interceptor missile that would not need nuclear warhead anymore, with better electronics, anti-jammers and the next generation solid-propellant engines, giving it around 500 km of killing range. The new nature of the potential threat was no massive bomber waves anymore but a few Russian planes buzzing in the arctic to assert their claim or probing the Canadian air space, this made the Black Horizon relevant again and it was planned to extend its ramps to many more RCAF bases of the Pine and Arctic line.

Many had wondered why Canada had kept investing in these weapons instead of social services but with the Red Maple, Castor and Black Brant XV rockets, considered as ones of the most reliable equipment, and Canadian Aerospace, Electronics and Rocketry company being famous across the world, it was clear that this logic was sound and that the Canadian strength was being able to turn swords into plowshares.
Last edited: Monday at 10:21 AM
You must log in or register to reply here.
Top
Share:
Share
Top