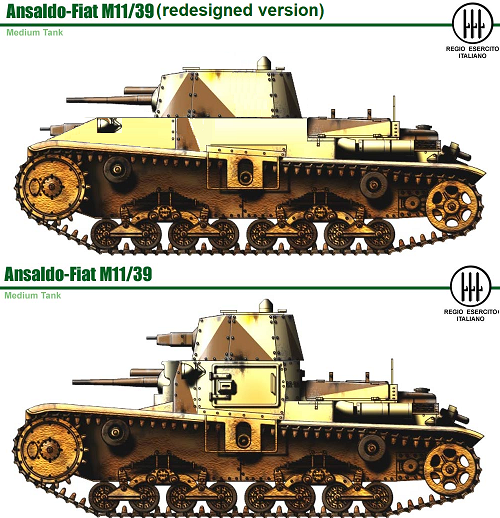 Here is my take on a Japanese Assault Rifle, which I based heavily off of OTL's Type 64 Howa Rifle.

Now here's a Japanese Self-Loading which I took inspiration from the Soviet SVT-40, the Czechoslovak vz. 52, and Arisaka rifles.

In which these two rifles in my headcanon's Imperial Japanese Military's small arms doctrine post WWII is just OTL Soviet Infantry Arms Doctrine, in which the Type-14 (much like the AK-47) was to serve as a submachine-gun, while the Type-9 (like the SKS), was to serve as the standard infantry battle rifle. The Type 9 would eventually be supplanted in it's role as a standard infantry rifle by the Type-14 (which had proven to be a superior gun to the Type-9) by the end of the 1950s, and withdrawn to 2nd and 3rd line roles alongside the older bolt-action Arisaka rifles. 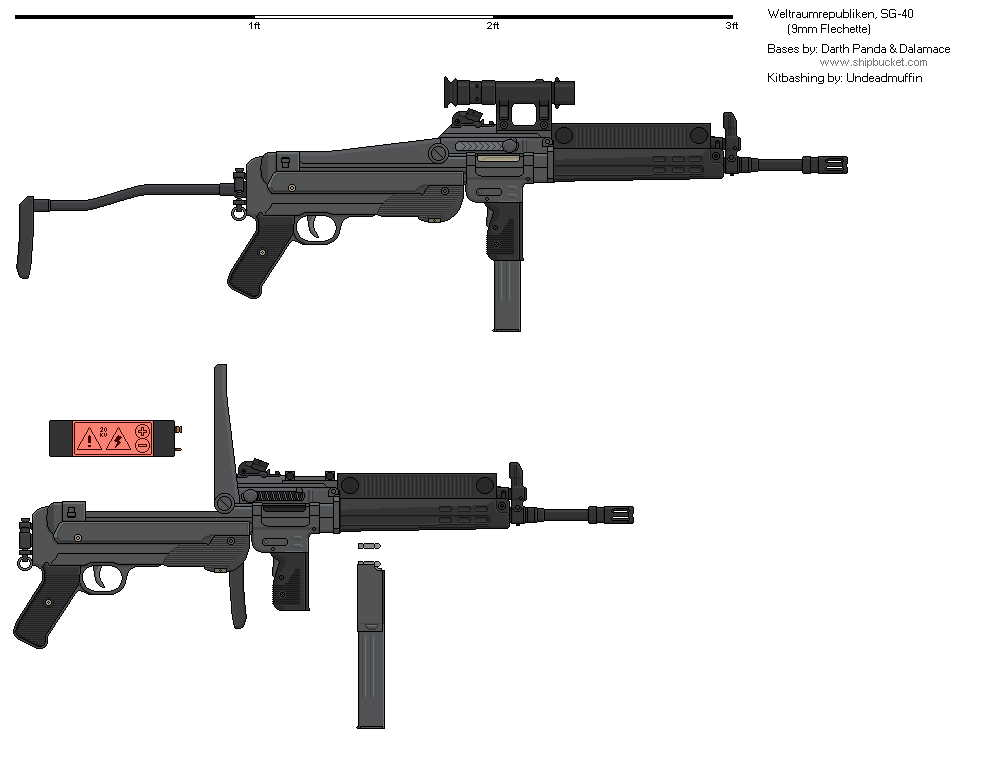 SG-40: The Schiene Gewehr 40/ Rail Rifle 40 is the main weapon of the Weltraumrepubliken, a union of European colonies who obtained their autonomy. With a diverse population, German became the main Lingua Franca for both commerce and industry, eventually becoming the De Facto political one. The first rail rifle made for individual soldier, it was designed around the wear of the electromagnetic rails, which could sustain 2000 rounds before showing signs of degradation. This led to the creation of the Habafa 95, an intermediary battery between the GWEN and M-18 ones, it was technically capable of firing the 2000 rounds but environmental effect could drop it efficacy down to 1500 rounds, so it was easily removable, with the soldiers being issued one in extra. The munition was a standard 9mm balanced winged steel flechette accelerated by two vertical electromagnetic rails, the munitions were loaded in a standard magazine with a capacity of 30 rounds.
A good, balanced and affordable weapon, the SG-40 would however be marred with some issues. The first and more well known was the desire to create a "sealed" weapon, meaning that it should fire without opened part, this meant that the ejection lever, which served to eject misinserted munition, had to be covered even when resting. While the Weltraumrepubliken engineers designed an ingenious "scaled" cover, it was well known to jam and lock, especially if the rifle had been roughed, leading to many soldiers illegally modifying the weapon to remove it.
An other issue was the barrel, if in the acceleration chamber it was a smooth bore to not disturb the rails, it received a polygonal rifling in the extension. The goal was to give the munition a spin to stabilize it but tests on the field showed that the "wings" on the flechette, needed to connect the two rails, were giving good enough ballistic for the usual combat range. This sudden rifling often caused problems with faulty, weakened, munitions with part of them breaking up in the outer barrel or, in rare but critical incident, jamming inside the barrel.

But despite these flaws, the SG-40 had proven time and time again to be a reliable, if over-engineered, piece of equipment, showing that even in space, the proud descendant of the old continent maintained the famed "Deutsche Qualität". 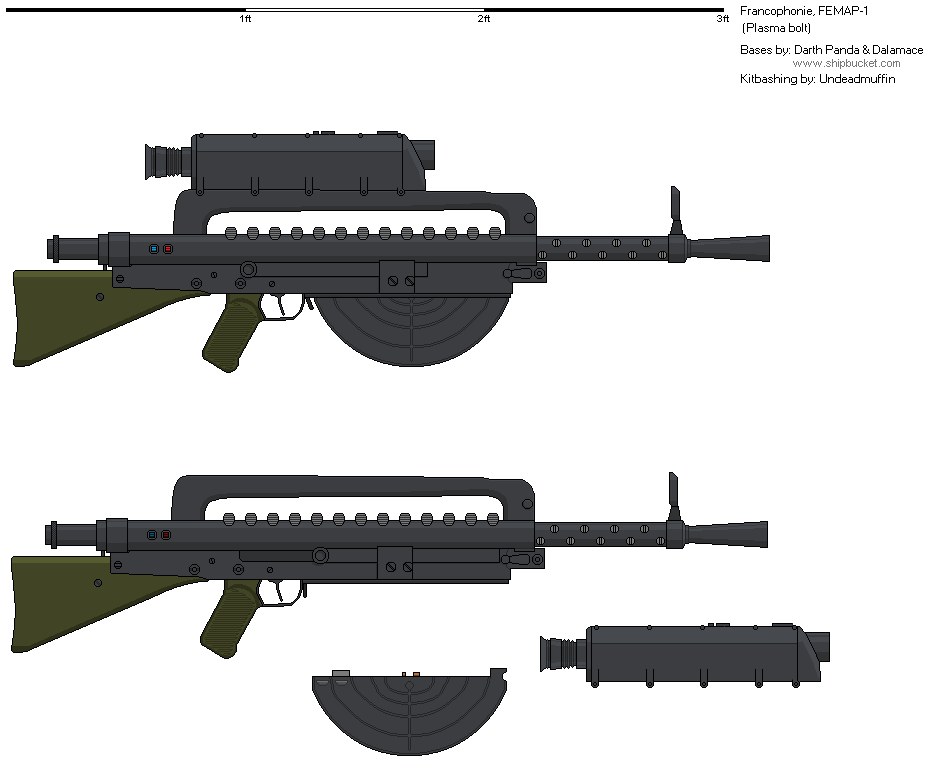 FEMAP-1: The Fusil Électro-Magnétique Accélérateur de Plasma (Electro-Magnetic Plasma Accelerator Rifle) was the perfect reflection of an old gunsmith adage: "The French copy nobody and nobody copy the French". While the majority of the human powers were embracing electromagnetism to sling metallic slug around, the Francophonie instead decided to develop the first man-portable direct energy weapon. What they created was quite an interesting piece of technology, a foot-long polarization chamber where the gas (usually Nitrogen but Argon can be used as a substitute) is submitted to high electric tension in a discharge tube until ignition, then electromagnetic coils eject the plasma through modulation of the magnetic field that maintained the plasma away from the tube surface. The mix of pressure and magnetic acceleration throw the bolt (although the Francophone soldier call it an arc) around 1,4 m/s (or 4,5 ft/s). At a regular atmosphere of 1 Bar and 1,2 Kg/m3, the bolt retain lethality over 1100 m. This is thanks to the creation of an ionized "surface" around the bolt that partially shield it from temperature exchange, the majority of the energy lost is caused by the resistance of the atmosphere due to its high speed.

But being at the forefront of technology always have its cost, in this case, quite literally. The FEMAP-1 is the most expensive piece of individual equipment, not helped by the high-tech scope TIVO (Télémètre Individuel de Visé Optique/Individual Targeting Optical Rangefinder) that can relay many information like live IFF on target, target range, level of magnification and, what is mostly liked by the soldier, a light intensity modulator that negate the light flash of every shot. Not only is it five to ten time more expensive then other rifles, it is also much more heavier, weighting around 12 Kg (27 pounds) fully loaded and equipped. Worst, with the decision of keeping both the gas and energy within the same magazine limited both and with 20 rounds per (heavy) magazine, the Francophone soldiers saw themselves burdened by the need of carrying many of them. But the limited capacity is offset by a larger problem, its slow firing speed of 250 rounds/min due to the need of loading the gas chamber. In addition, the gun was everything but stealthy, effectively shooting light rays, and with its limited lethality range, it was impossible to use it as a long-range rifle, leading Francophone snipers to keep old chemical propellant rifles.

So with all these drawbacks, why the Francophonie not decided to cut its losses, shelved the weapon and design a more practical one ? Some would say that pride and sunk cost fallacy is what forcing their hands but while it could be part of the truth, it obstruct one clear reason: lethality. Any soldier hit by a plasma bolt within the lethal range won't be sent back on the front line either due to it being crippled or dead. Only 5 cm of rolled steel can perfectly protect anyone from a FEMAP shot and even the most modern body armor have the same protecting ability as a regular combat jumpsuit when hit by a plasma bolt. Wielding the most powerful individual weapon of the human sphere might have drawbacks but it also have advantages.

S. Marlowski said:
Now here's a Japanese Self-Loading which I took inspiration from the Soviet SVT-40, the Czechoslovak vz. 52, and Arisaka rifles.
Click to expand...

OTL, the Japanese tested a number of Pedersen-based designs before the war, and near the end, came up with this glorious admittance of how screwed they were:

Yes, that is a Japanese copy of the M1 Garand.

An improved and larger version of my A-290 blaster.

Original version on page 273 of this thread.

cortz#9 said:
An improved and larger version of my A-290 blaster.
View attachment 619002
Original version on page 273 of this thread.
Click to expand...

S. Marlowski said:
You should make a blaster version of the Arisaka rifle and the SVT-40
Click to expand...

Hmm...I'll give it some thought.

What's alternate about it?

Cereskia said:
I mean that it could be used in the vietnam war and today instead of the M16 rifles
Click to expand...

Ah I got ya, a could've been, almost was.

S. Marlowski said:
You should make a blaster version of the Arisaka rifle and the SVT-40
Click to expand...

Often inaccurately described as a carbine version of the more popular A280 the A288 was an independently designed weapon intended to replace the A280 but the fall of the Republic brought these plans to a halt. Light, compact and good accuracy made the 282 popular with warriors who appreciated the positive aspects of the weapon but didn't mind the extra maintenance and care the blaster required for reliable usage.

The E-110 was once a competitor of the E-11 for adoption as the standard blaster for the Empire's stormtrooper force but lost out due to it's heavier weight and lower accuracy, the E-110 was however a very rugged and reliable blaster and found favor with some members of the underworld.
Famed bounty hunter Boba Fett once described the E-110 as a very reliable clunker.


Both blasters are actually paintball guns.

Inspired by Jim Smitty's "An American in Berlin Redux" TL