Albion, where the Sun never set

WheelyWheelyLegsNoFeely said:
This isn't related to the timeline itself, but how did you go about editing the scientific classification for these species' wikiboxes? I've been trying to do something similar for a project I'm working on but I can't seem to figure it out (as opposed to wikiboxes about rulers or countries, which are fairly straightforward). The scientific classification doesn't seem to be included in the box template, which is where I'm running into issues.
Click to expand...

Sincerely most of it I did over paint because I couldn't be bothered to learn how to properly edit it in wikipedia itself, for example:

Here is the infobox for the Passenger Pigeon on my sandbox on wikipedia.
To make it look rights, I took out the crosses that signify extinction and the pencil besides Scientific Classification
Said pencil, BTW, takes us to this: https://en.wikipedia.org/wiki/Template:Taxonomy/Ectopistes Which is what I believe to be the reason why we can't easily edit the classification. - I mostly comment this because until you asked I hadn't noticed it had a link leading us to anything, and thought it was simply some annoying thing caused by me doing the boxes on my sandbox instead of in a proper wikipedia page
But that's the gist of it, when I needed to edit the classifications I just took a screenshot of a box with them, pasted it to Paint, and copied it over to the box I was editing
I wouldn't say it is hard to do so, but it is annoying

Unrelated to the message above, to those who read this TL, a few days back I did a fixer-uper on the Canada post and added another map to the dynasties. So if anyone hadn't noticed it, well, now you can go look.

(And for those a bit annoyed about the lack of additions to the TL, I'd like to say that I'm planning on posting something here in the next few days to hopefully get on with smaller but more frequent smaller additions)

TheBeanieBaron said:
Are there any subnational monarchies in Russia that are ethnically Volga German?
Click to expand...

A few, yes.
As of 2020, 3 of Russia’s Zemlye (the general classification for monarchical Federal Subjects) are considered to be “Volga Germanic” – Which on this case means that their population is made on its majority by self-identified Volga Germans or has them as its largest ethnic group, while their local monarch is at least of German descent. A bit ironically, none of them are located in the “Volga German” region, which is a part of the country’s oblasts, due to a mix of population movements of the 19th/20th century, happenstance, and how the Russian Reunification went down.
They are: 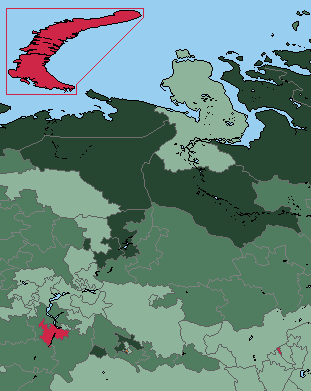 - Zembla, the largest of the 6, whose Volga German population owes its presence to late-19th century attempts of the Old Russian Empire to shore its position in the Novaya Zemlya Archipelago against Norwegian settlement by moving hundreds of Nenets, Volga Germans, Pomorians and Finns to the islands; because of that the state isn’t actually majority Volga Germanic, with them making around 40% of the population of ~45,000
- the confusingly-named Lower Bulgaria (also called Syzran/Syzrania after its capital to differentiate it from Balkan Bulgaria), which actually started as a Majority-Russian state ruled by a German dynasty only (and named after a historic Turkic state) and gained a large Volga German population over the course of the 1920s and 30s, when its stability and German-perceived rulers made the state attractive to refugees from downriver, with its modern population being in actuality more of a mix of the two groups due to intermingling over the following century – Uniquely to it, the state is ruled by the House of Nassau-Saarbrucken (or Nassau-Dillingen*) a morganatic branch of the Nassau dynasty whose history of coming to Russia is a rather interesting one**
- and Krasivinsky, a small state made of a collection of five towns/villages led by the eponymous Krasivoye, which was established as a Volga German settlement in 1905 and during the years of the Russian Civil War became a small fiefdom who came to control the nearby settlements through having an overwhelmingly larger population

Something I’d like to add is a note on the Republic of Perevolotsk (pointed in orange), a small agrarian (quite-literally) republic who interestingly started in 1925 when a battalion made mostly of Volga-German soldier, after getting abandoned by their retreating forces, came to the village of Perevolotskaya looking for a refuge; to the soldiers’ surprise, the locals agreed to give them a place to stay in exchange for their work in manning the local fort, and through that serving as a defense force for the area. From there, the soldiers ended-up settling down and marrying into the local community (since the war and disease had resulted on most of their male population being either dead, children, or elderly), with Perevolotsk’s modern inhabitants having a mixed Volga German and Slavic culture

* It’s complicated; theoretically, both could be used but no-one is sure which is the “correct one”, since the branch’s founder was given the title of “Duke of Dillingen” as a child (he was the morganatic son of the penultimate Prince of Nassau-Saarbrucken, and although barred from Saarbrucken, he inherited the title of “Prince of Nassau”, while his mother had been given the Duchy of Dillange/Dillingen and so through her he was the “Duke of Dillingen”) and was only as an adult given the title “Prince of Saarbrucken” by Alexander I of Russia. Many people, do not deal with it, just call the family the “House of Nassau-Syzran” or “House of Nassau of Bulgaria”
** To make a long story short, the branch’s history in Russia starts with its founder, Adolph, volunteering to Napoleon’s Invasion of Russia as 22-year-old and getting badly wounded by a shot in the shoulder at the Battle of Smolensk (16 August 1812), which was then followed by the bullet only being surgically removed some forty days later. After that, his story continues on early December, 1812, when the retreating Great Army passed through Vilnius and he, injured and frostbitten, was nearly run over by a cannon, being taken to the house of a Rabbi, where he ended-up surviving the night by the skin of his teeth, losing his damaged arm (which was amputated due to the frostbite), and then convalescing for so long there the army passed him by.
Believed to be dead for a couple of years after that, Adolph stayed living in Vilnius, where he married a local Jewish woman (who converted), and only reappeared in 1818, when his mother’s continuous hunt for his whereabouts resulted in his discovery, which was followed by a small scandal because of his marriage. Said small scandal also brought Adolph to the attention of Tsar Alexander I of Russia, who after deciding to meet him due to curiosity ended-up becoming friends with the younger man and inviting him and his family to the Imperial Court, from where they would become a part of the Russian nobility first unofficially and then officially

TheBeanieBaron said:
How did Sri Lanka get a Braganza on their throne?
Click to expand...

By marriage. I should note though, it wasn’t Sri Lanka who got the Braganzas, but Kandy

Basically, ITTL the Kingdom of Kandy (which is also colloquially known as Udarata, “Upper Country” in Sinhalese) isn’t annexed by the British in 1815, instead ending up as a de facto princely state of “British Ceylon” following a slightly different set of Kandyan Wars and the Kandyan Convention, which unlike OTL sees a descendant of the previous House of Dinajara* placed on the throne of Kandy as a mostly powerless monarch instead of it being given to the British Monarch.

The Braganzas, then, come into play in the 1970s, when a grandson of the first King of Entrerrios married the Kandyan Crown Princess, who later chose to preemptively abdicate to their eldest son, whose own son is the current Kandyan monarch

TheBeanieBaron said:
Have any new Saxon duchies been created though divided inheritance since the formation of the German Empire in 1871?
Click to expand...

Ironically, no. Much like OTL the Ernestine Duchies had already all moved to primogeniture by 1871, while the Albertine Secundogenitures, while having fragmented a few times over the years, had also stopped with the practice by then

TheBeanieBaron said:
How did Galicia get it's subnational monarchy?
Click to expand...

TheBeanieBaron said:
Are any of the other subnational monarchies in Russia ruled by foreign royal houses like Luar and the Windsors?
Click to expand...

Yes, technically? It’s a bit up for interpretation since the families who rule those states, while descending from foreign royal houses, were already a part of the Russian Aristocracy before becoming rulers of Zemlye during the era of the Civil War, unlike Luar where the Windsors married into the original dynasty and through that became its rulers.

But that's admittedly just semantics. At the end of the day, there are 3 Zemlye whose ruling families are recognized branches of foreign dynasties, 1 (Urmia, in the Russian Far East) is ruled by a Branch of the Borjigin Clan/Genghisids (descending from the Mongolian side of the dynasty) while the other 2 (1 located on the Caucasus and the other near Lake Baikal) are ruled by branches of the Bagrations.

I'm only saying recognized because if I didn't then numbers could rise a bit (the rulers a few other Zemlye claim or are said to descend from Genghis Khan on the male line, for example)

The one on the Iberian peninsula.

Right, I know that this is a bit late but:

Peppe said:
The Eternal State of Agartha
Click to expand...

Where, and what is the Eternal State of Agartha? I was just rereading the TL when I noticed this. And apparently they still don't recognize that World War II has ended? Why is that? And who rules them? Maybe a bit of history? How and why were they established, and how did they last so long?
Threadmarks
Reader mode
You must log in or register to reply here.
Top
Share:
Share
Top