AHC: Give Czechia a coast 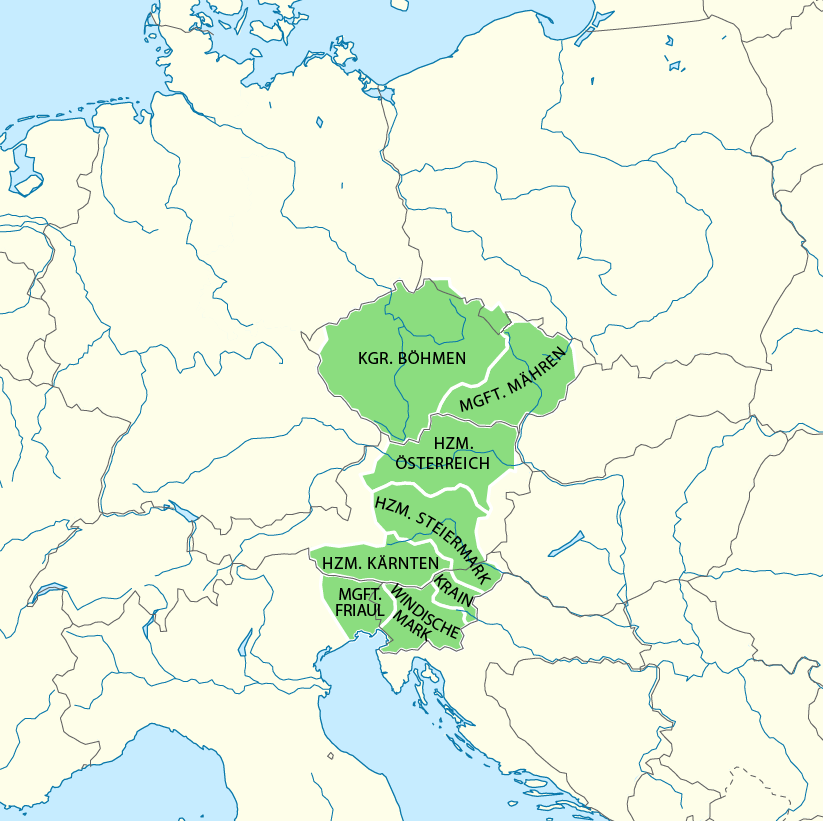 This is interesting. I suspect that Ottokar would have to win the Imperial crown in 1273 in order to hold on to this territory, I don't know if that's plausible or how that would change things. I wonder if Austria would be slavic speaking a few hundred years down the line in this scenario? Carinthia should at least have a larger slavic speaking population. I imagine that Prague would take Viennas place as the capital of Central Europe in this tl.

Analytical Engine said:
Question - does the coast have to be contiguous with Czechia?
Click to expand...

Adora Basil Winterpock said:
This is interesting. I suspect that Ottokar would have to win the Imperial crown in 1273 in order to hold on to this territory, I don't know if that's plausible or how that would change things. I wonder if Austria would be slavic speaking a few hundred years down the line in this scenario? Carinthia should at least have a larger slavic speaking population. I imagine that Prague would take Viennas place as the capital of Central Europe in this tl.
Click to expand...

The most difficult part of this is the "Czech majority" part.

Maybe Poland resists christenization longer and is slowly conquered by a Bohemian Kingdom, leading to Czechs becoming the dominant west-slavic culture and Poles seen as a type of Czechs? Then this Kingdom get's a Baltic coastline, where the Teutonic Order was in otl.

Comte de Dordogne said:
How about a global warming so devastating that all the ice caps on earth are melting and causing sea levels to rise?
It would be fun if the Sea of Pannonia were to reappear in Central Europe and thus give the Czechia a coastline.
Click to expand...

The easiest way would be to acquire Polabia/Brandenburg+Mecklenburg. The latest PoD for that would be WW2 where the Normandy landings fail and the western allies get significantly delayed.

jycee said:
That would be an inland sea would it not? Would that count? I guess it would have easy access to the Greater Black Sea through the Danube, but it would have to control the iron gates as well
Click to expand...

I looked at this site (https://www.floodmap.net/) and indeed it takes a lot more than I thought.
Too bad I wanted to be original.

Well, the Iron Gates are quite tall but narrow. Did you know Tito had the whole thing rigged to blow in the case of invasion by the Warsaw Pact? It would be very easy to cause it to fill up more than planned, which would probably close up the gorge to the point that basically the entire Carpathian basin would have been sunk and instead flowed out into the Oder instead

Adora Basil Winterpock said:
Find a realistic POD, as late as possible, that gives a majority Czech nation with it's capital in Prague a coastline on either the baltic or Mediterranean (or somewhere else...idk how though)
Click to expand...

Czechia inherits Austria and Slovenia and thus gains a Coast.

I mean, my go to would be have fun with a Czech-Hussite identity. Lets start with a surviving branch of the Royal
Přemyslids survive in exile - perhaps they are thought dead but are in fact alive, and become Hussites in an attempt to reclaim the throne - essentially forming the heart of a faction between the Taborites and Ultraquists that can moderate the calls for democracy with a now Hussite-Premyslid King - one with a beef with the HRE Sigismund for sure, but in a position to push the old family claims on Hungary and Croatia.

Assuming they can pull that off, they can essentially be a Czech bulwark, converting using Czech and the like.

You shouldn't go that far in the past. I could find more suitable POD in
late 1990s. Few years ago Croatian press reported about secret meetings
between representatives of Czech and Croatian government. Czechs
apparently proposed that few strips of Adriatic coast, containing camps
almost exclusively visted by Czech tourists during summers, become
sovereign Czech territory in exchange for hefty financial compensation.
The reason for that proposal was widespread custom of Czech tourists to
fill the trunks of their cars with food and drink bought in Czech
Republic in order to evade buying said goods on local Croatian markets.
Czech enclaves on Adriatic were supposed to allow Czechs to enjoy local
cuisine at Czech prices (which were much lower than in Croatia).
However, Croatian government rejected the deal, mostly due to Tudjman
being unwilling to sell off chunks of Croatian territory, or, to be
precise, unable to present this to Croatian public as a triumph of his
statesman's genius.
Click to expand...

It looks like there's still a big Czech presence there: Czechs float ′corona corridor′ lifeline for Croatian tourism | Business| Economy and finance news from a German perspective | DW | 22.04.2020 "Czechs are trying to salvage summer plans and help out Croatia's tourism season in the process. Czech travel associations have proposed a "corona corridor" to the Adriatic Coast. Is it a realistic plan or not?"

Great Moravia is able to solidify its control over eastern *Austria and Pannonia, and eventually expands into the Slovene and Croatian lands, giving it a chunk of the Dalmatian coast. Over the centuries, these come to be seen as integral parts of the Moravian realm.

On 15 June 1246 Frederick II was killed in battle. King Wenceslaus quickly arranged the formal marriage ceremony of Gertrude and his heir, Vladislaus. Per hoc Wladislaus habebat Austriae ducatum cheered Bohemia and, supported by the rights of his wife and the prospect of inheriting the Bohemian throne, Vladislaus was quickly recognized as Duke by the Austrian aristocracy. However, shortly after their marriage, Vladislaus died on 3 January 1247.
Click to expand...