Any one good at doing any dragon type ouroboros' or could point me in the direction of some good ones. Trying to do a probject but massively stuck. Or btter yet, anyone know anyone doing comissions or requests?

This a coat of arms of a Belgian Cuba 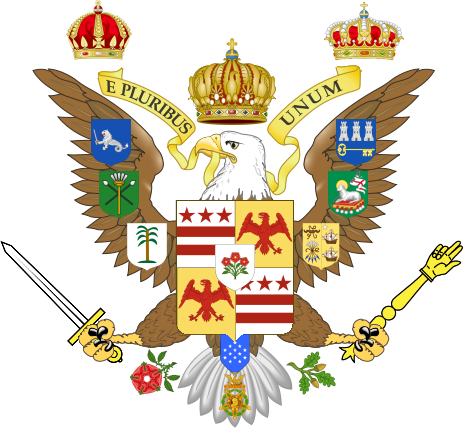 The greater coat of arms of the Empire of America, as seen here.

The estutcheon features the arms of the original ruling dynasty the House of Washington (having therefore become the arms of America itself) with an inestutcheon representing the current ruling House of Roosevelt, decorated with the Medal of Honor, above a bald eagle holding a sword and scepter and a scroll with the national motto, surrounded by the arms of the dominions of the American Commonwealth (left to right: the Philippines, Hawaii, Liberia, Panama, Puerto Rico, Cuba), the imperial crown of America and two royal crowns (one for Hawaii, one for the other dominions), and the rose and oak floral badges.

jkarr said:
Any one good at doing any dragon type ouroboros' or could point me in the direction of some good ones. Trying to do a probject but massively stuck. Or btter yet, anyone know anyone doing comissions or requests?
Click to expand...

Only just saw this post - what kind of ouroboros do you need? Something simple like this, or very detailed like this, or in between like this? What else do you need in the symbol/logo? I can't promise I can do what you'd like as I haven't done ouroboros before, but I might be able to.

The War of the Five Kings and War of the Three Queens ended with the establishment of an elective monarchy in Westeros and the independence of the North, with Dorne and the Iron Islands following it in subsequent generations, leaving the remaining lands to further consolidate and centralize as the United Kingdoms of Westeros. Initially the arms of the United Kingdoms were simply the personal arms of the reigning king or queen at the time and changed at their death and the election of a new monarch, but this became increasingly unviable as the state administration grew and modernized, and as the position of monarch changed from a lifetime appointment to one with set term limits. Finally it was agreed that a permanent new coat of arms would have to be established.

The arms of the United Kingdoms of Westeros consist of the quartered arms of the four official kingdoms, the Westerlands, the Vale, the Reach, and the Stormlands (much to the chagrin of the Riverlands, which remains excluded due to not being an official kingdom). Officially the inestutcheon should consist of the personal arms of the reigning monarch; otherwise the "default" inestutcheon is a red seven-pointed star on black (in honor of the Faith of the Seven, while the color scheme recalls that of House Targaryen) and this version is increasingly used de facto. The dragon supporters also recall the importance of House Targaryen in Westerosi history (actual Targaryen loyalists having long since ceased to be a threat) while the raven crest honors the Citadel and the importance of ravenry in Westerosi culture, and the collar is that of the Order of the Poor Fellows.

Here's even more future GOT/ASOIAF heraldry, this time of the independent Kingdom of the North, still under House Stark (at least officially although in reality we're several cadet branches in by now): a direwolf running on a white field, supported by two more direwolves standing on a compartment of a snowy field of winter roses, crowned by a version of the Crown of Winter and still bearing the ancient motto of "Winter Is Coming".

And even MORE modern Game of Thrones heraldry, here's the independent Principality of Dorne: 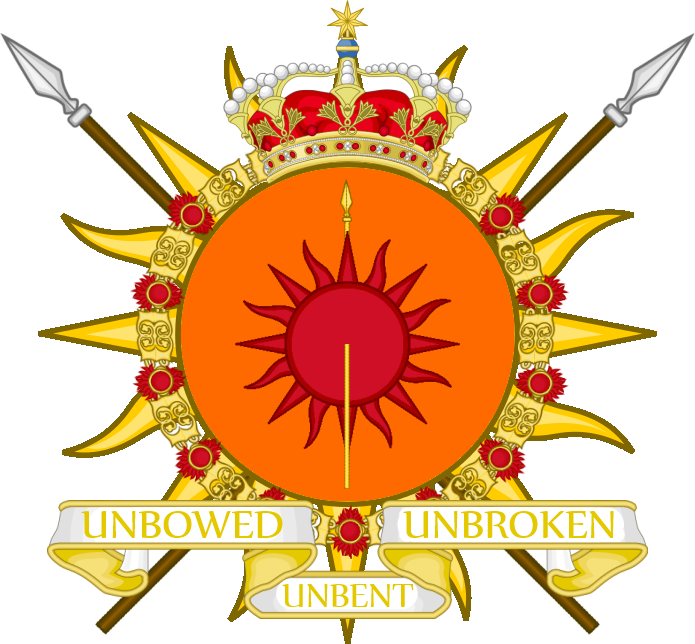 Banned
Here's my proposal for an EU coat of arms. It's my fist time doing heraldry, so please be gentle.
Blazon:
"Azure, a dove displayed argent, beaked and membered gules, holding in its beak an olive branch vert, within an annulet of twelve mullets Or. The shield ensigned by a laurel wreath vert. Supporters: dexter, the maiden Europa proper, vested argent, crined gules; sinister, a bull rampant argent, armed and unguled gules. Motto: In varietate concordia." 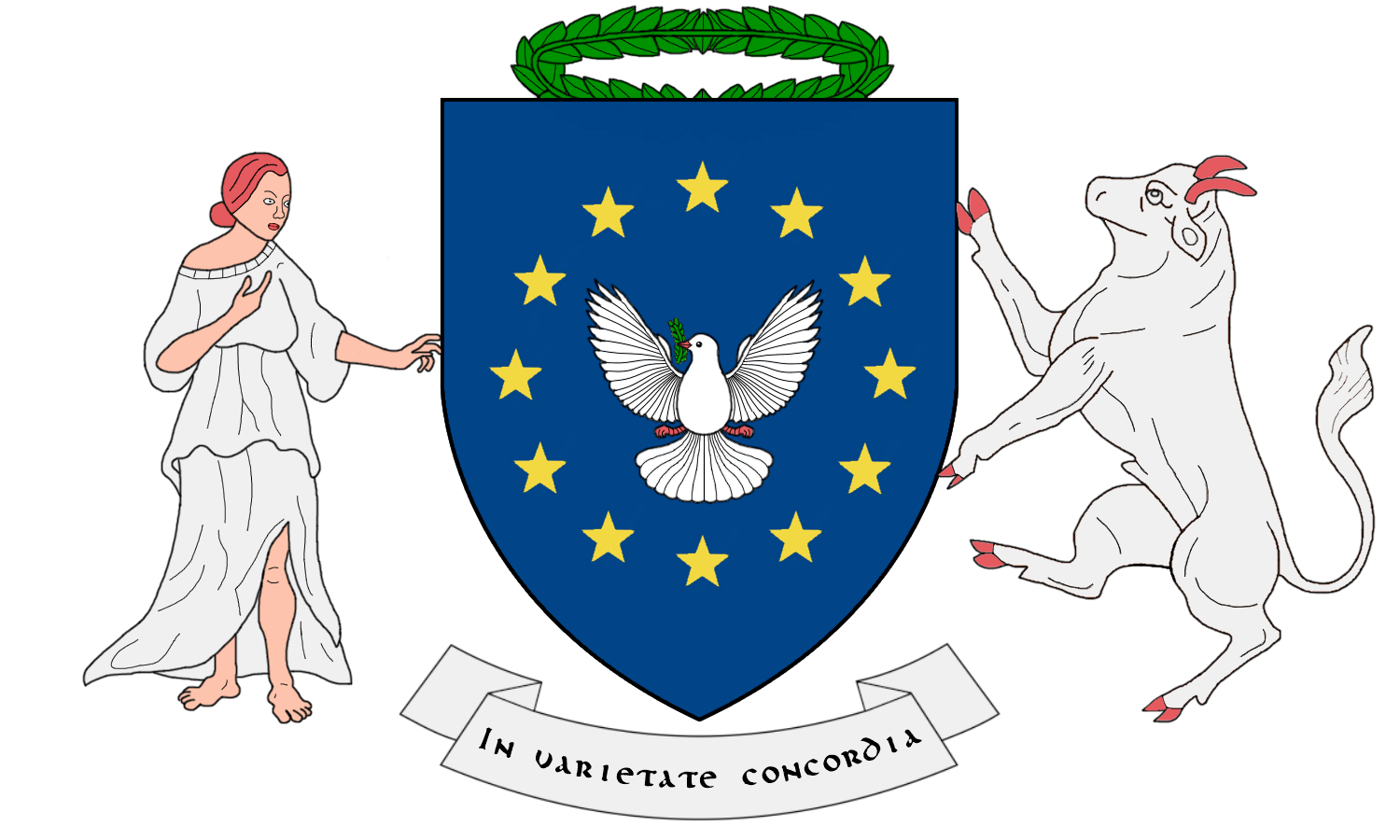 A design for a personal coat of arms, because why not. 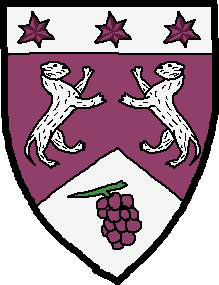 The three mullets represent my three conflicting national identities: British, Dutch, and European.
The stalk of grapes represents Dionysus, but also serves as a symbol for Neohellenism in general.

I couldn't fit a scroll on without it looking a bit weird, but the motto would be "Nia estonto kuŝas inter la steloj" - Esperanto for "Our future lies amongst the stars".

Hi. I’m working on a design for an American Imperial Crown, and have the elements ready, but not the proportions yet.

It consists of a mitre of gold-embroidered fabric shaped rather like an onion dome without any crease or division, with lappets of like fabric; and a gold bejeweled circlet surmounted by eight crosses shaped like octagrams (rather like those on a Lakota star quilt) and eight half-arches meeting at an orb surmounted by a golden jeweled cross fleury.

Quite a mouthful, no? It resembles St. Edward’s Crown somewhat and weighs about the same. I’ll post a picture soon. 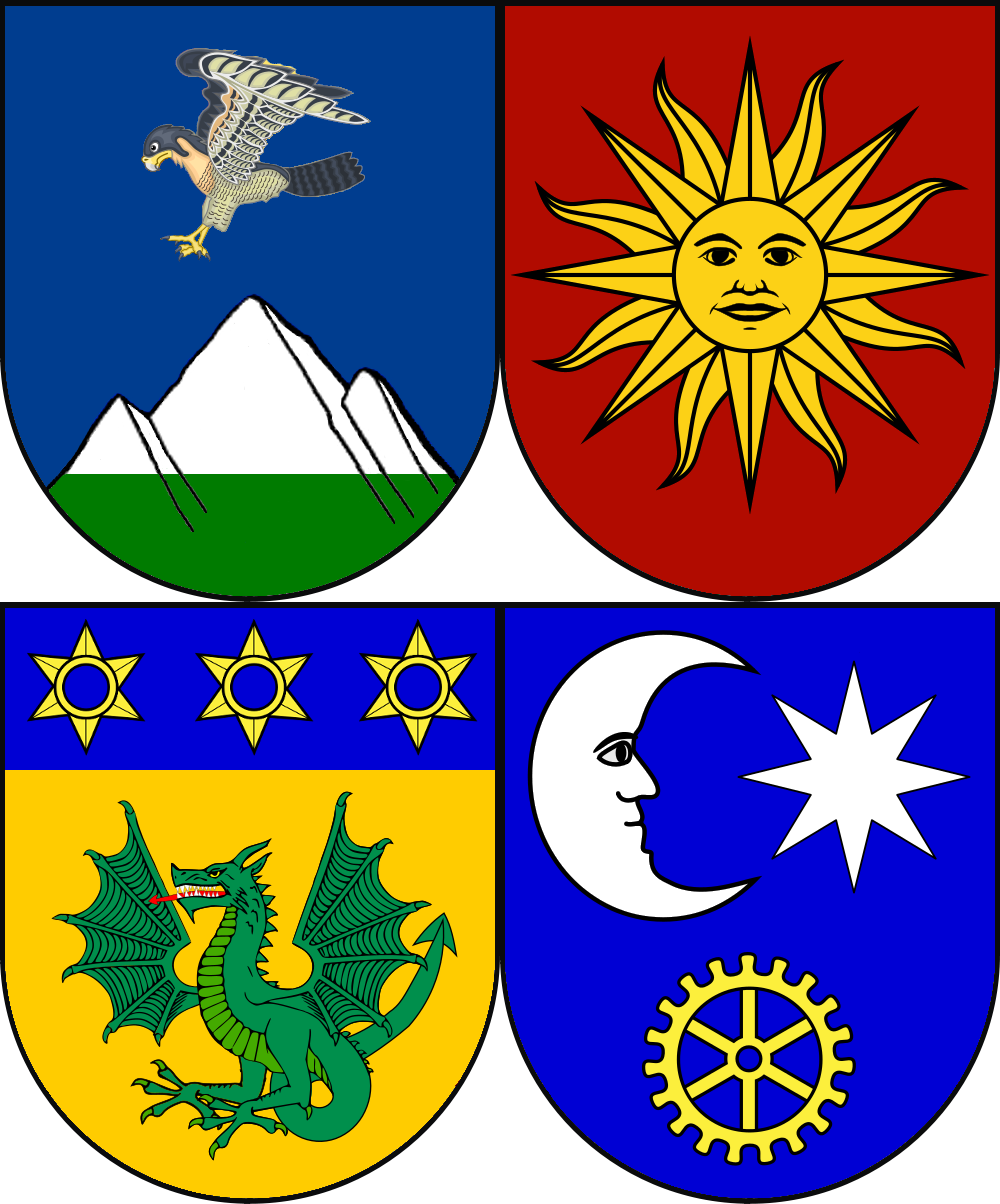 In this thread, I tend to post coats from more fantasy-style alternate worlds. This set of four coat of arms style emblems is based on the four emblems I can recall best from a dream I had in late September. It was a sky pirate themed dream (not my first one !), with zeppelin and other airship crews tramping around as cargo-transport freelancers or air-corsairs-for-hire. The first emblem, in the upper left corner, is the one I remember the best. It was the emblem used by the crew under the command of the in-dream version of myself. A kestrel flying above three mountain peaks, with the upper part argent (to indicate snow) and the lower part green (presumably for forests). In the dream, the kestrel charge was actually argent, but I couldn't find a good enough flying kestrel falcon (loads of sitting ones, few flying ones), so I went with the one I did. I think it actually fits all the better, because the crew's emblem in my dream had a sort of folk-made, embroidered quality to it (displayed on a tapestry in the airship's mess hall, no less). The other three are the ones I remember completely enough to reconstruct them. Given the steampunk tone and themes of the dream, the sun charge actually reminded me of something when I was recalling the dream and writing it down - though he is an aircraft aeronaut rather than an airship aeronaut, Jules Verne's Robur the Conqueror had a sun with a face charge on his banner. Clever hidden reference by my subconscious ?! You decide...

The coat of arms of the Republic of New Judea (Jewish Hainan), founded by the Spanish to get rid of their jews in the 1700s 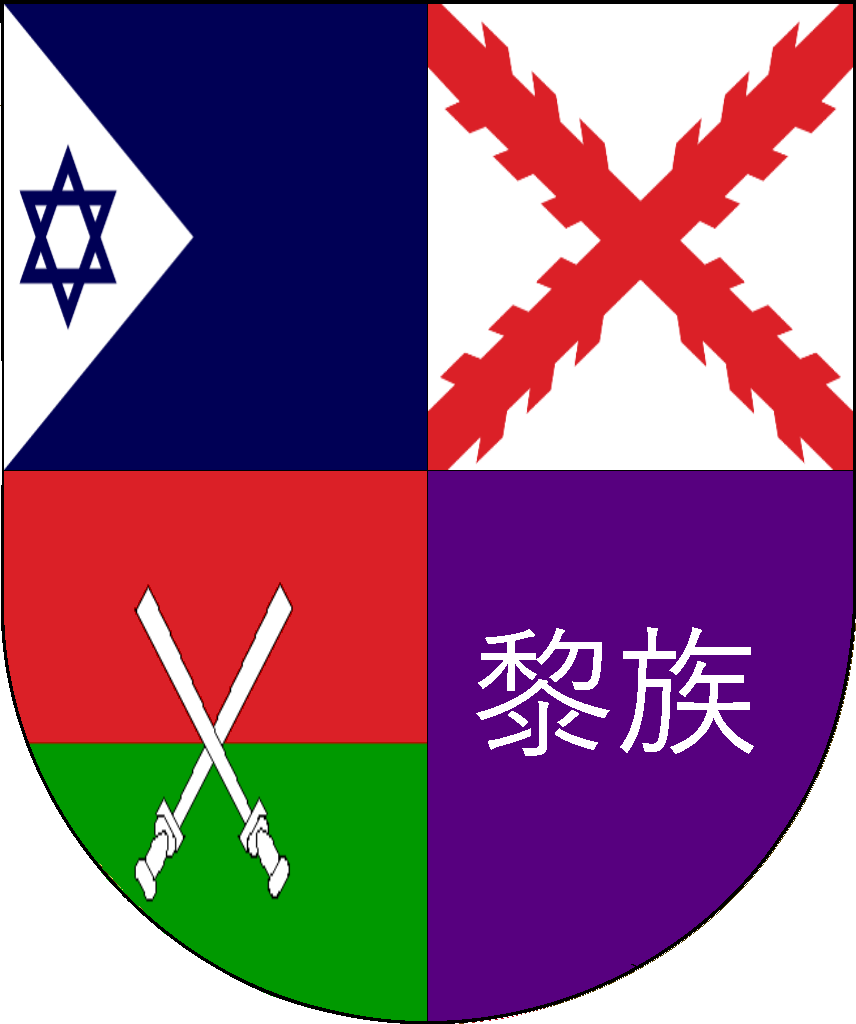 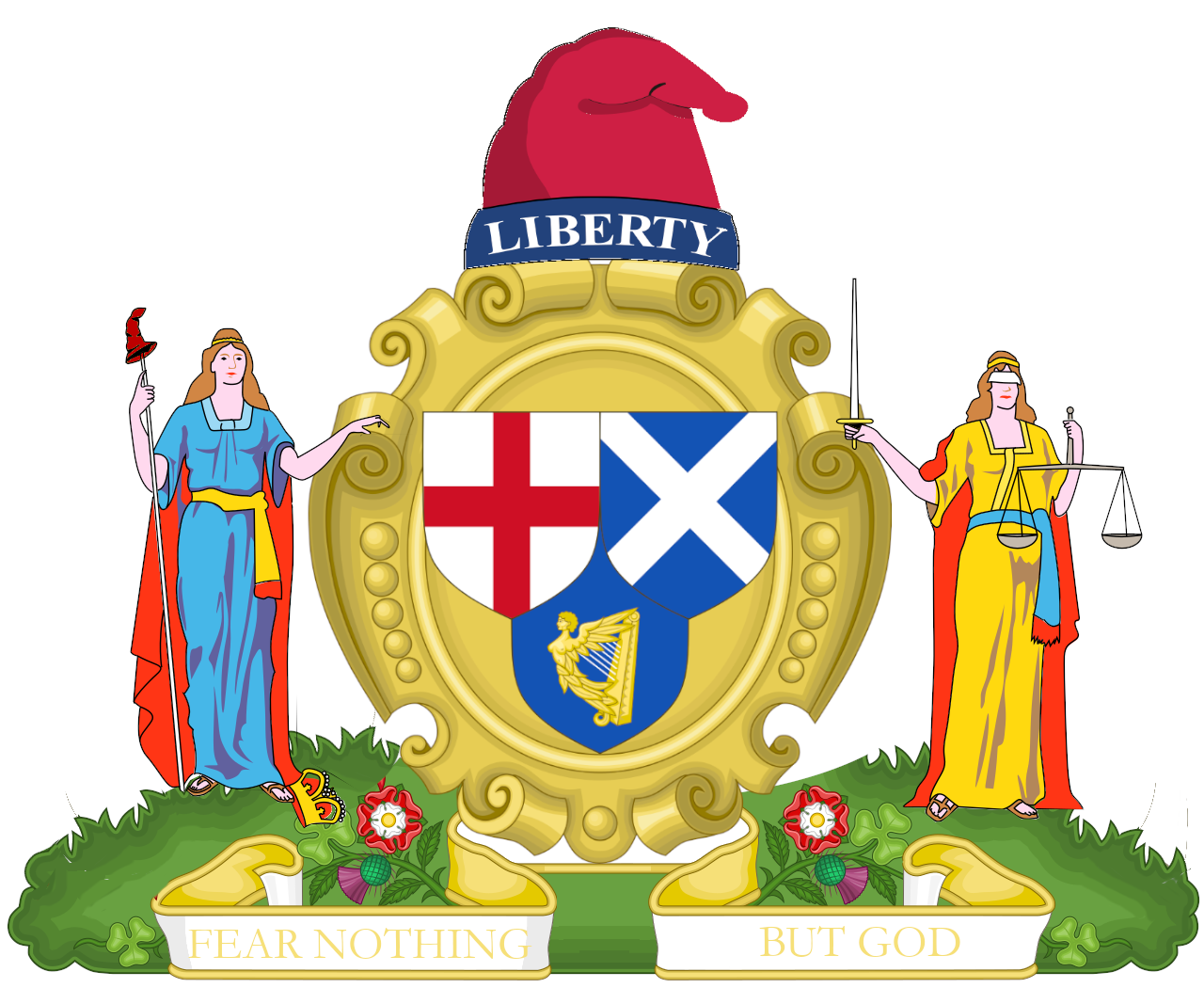 It is 5am and the cap isn't perfect but sod it, tada! 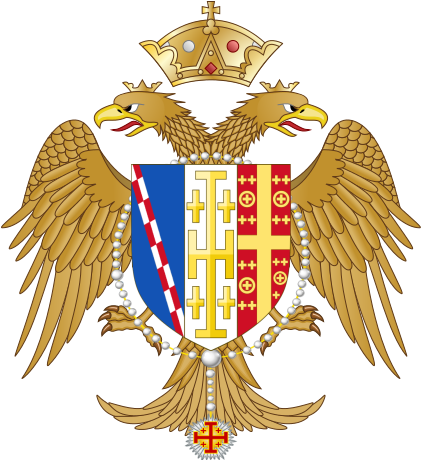 Based on a CK2 playthrough as the Hauteville dynasty, Duchy of Apulia -> Kingdom of Jerusalem -> Byzantine Empire -> Roman Empire, here's a coat of arms from a timeline where the Normans in Sicily successfully took over the Byzantine Empire and dominated the crusader states of the Outremer, merging them all into a new empire dominating the eastern Mediterranean, centered in Constantinople and reaching to Rome and Jerusalem, officially claiming the mantle of the Roman Empire but near-universally referred to under the name of its ruling ethnic class, as the Norman Empire. I also wanted to experiment with some of the funkier marshalling methods characteristic of earlier medieval heraldry as opposed to the more rigid quartering of later heraldry, hence the division by three.

KolyenuKS said:
The coat of arms of the Republic of New Judea (Jewish Hainan), founded by the Spanish to get rid of their jews in the 1700sView attachment 494271
Click to expand...

I see you are trying to represent the Li on the 4th quarter.

An accepted Ethinic Li symbol is something like this, preferably on light blue background: 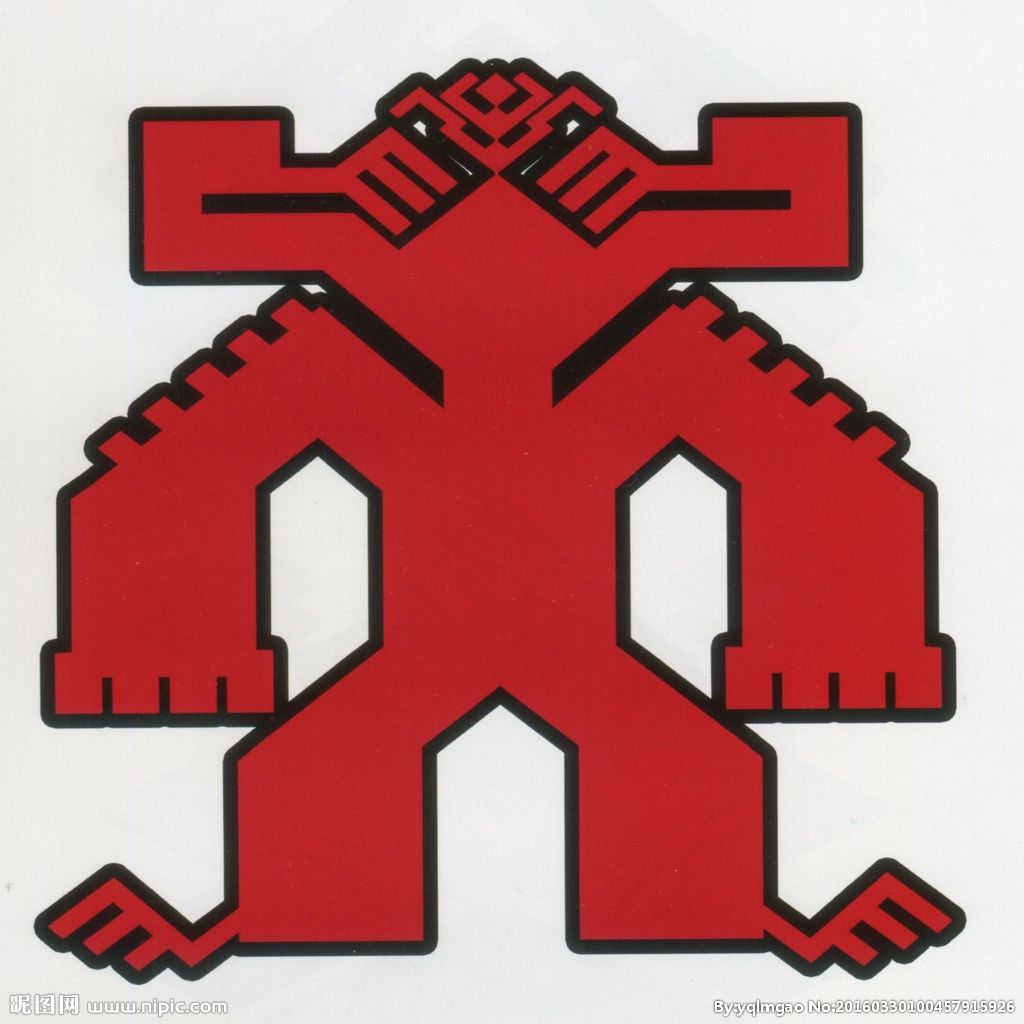 Banned
This is still unfinished (still need to work on the crowns, and also the full CoA for Georgia), but this OTL piec ought to knock your socks off... 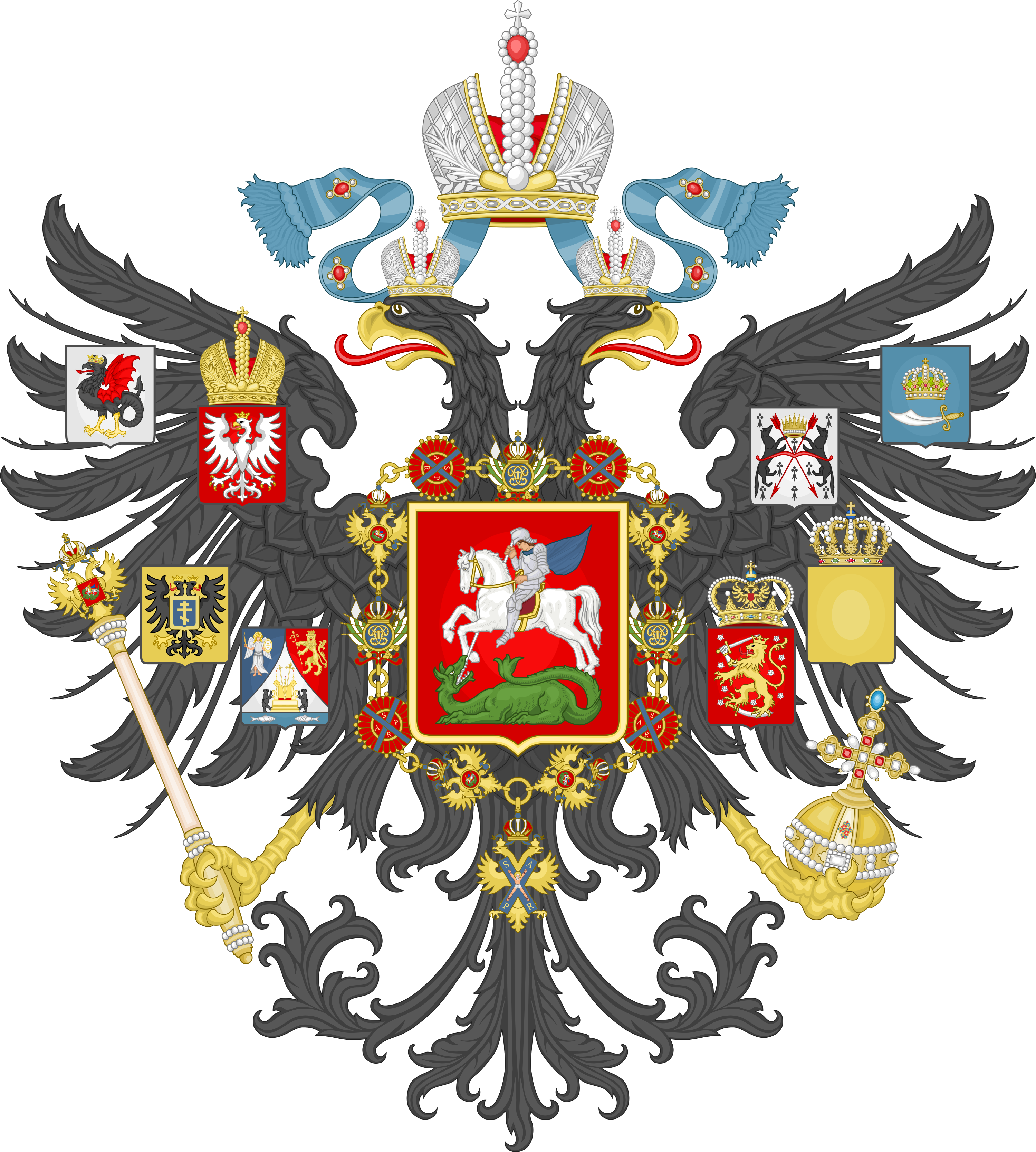 Hi there! I was wondering, are you allowed to request coat of arms here?

Iron_Lord said:
Hi there! I was wondering, are you allowed to request coat of arms here?
Click to expand...

Probably best to go to the request page. First pinned post on this sub forum.

Saxland: the arms of Wessex impaled with the arms of the other four kingdoms that make up Saxland: East Anglia, Essex, Kent, and Sussex, with an inestutcheon for the kingdom of Mercia partially included in Saxland as the province of West Anglia, supported by the golden wyverns of Wessex, crowned with the Crown of St. Edward and crested with a Saxon Steed, with the Order of the Garter and the royal motto "God and Min Riht" ("God and my right")

Prydain: Quartered, the arms of the three kingdoms that united to form Britain: Gwynedd, Dumnonia, and Strathclyde (by extension representing the three greater regions of Britain: Brythonia proper, Dumnonia, and Cumbria), along with the golden dragon of Owain Glyndwr representing the lands of Lloegyr yet to be reconquered and an inescutcheon of the red dragon representing the British union, supported by red dragons, crowned with the Tudor Crown and crested with the Cross of Neith, with a ribbon with the national motto "Pleidiol Wyf I'm Gwlad" ("I am true to my country"), the national floral badges of the leek, and banners of the national flag and the flag of St. David

Jorvik: Quartered, the arms of the Kingdom of York proper (three white roses for the three ridings), the Kingdom of Lindsey, and the remaining four of the Five Boroughs (Ledeborg, Stamborg, Djuraby, and Notingborg), with an inescutcheon of the raven of Ivar, supported by white boars, with the Order of the Sun of York, flying the national flag and the Raven Banner