The original thread can be found here - all 500 pages of it!

At just after 2am, Rudolf Hess who is attempting to fly to Scotland to intercede with the Duke of Hamilton in order to bring about peace negotiations is shot down and killed over the North Sea by a Beaufighter from 219 Squadron, RAF. His flight had been tracked by radar stations in the Netherlands and along the east coast of the UK, allowing time to scramble fighters from Catterick and shoot his aircraft down.

At around noon, Hess's adjutant Karlheinz Pinsch delivers a sealed letter to Hitler at the Berghof, in which Hess outlines his reasons for flying to Scotland. After reading the letter, Hitler remarks calmly that “at this particular moment in the war that could be a most hazardous escapade” and orders the Gestapo to arrest Pinsch along with Hess's other adjutant Alfred Leitgen. Both men are formally cashiered from the SS on the spot and placed in solitary confinement by the Gestapo, but are not interrogated.

Meanwhile, in Australia, the Governor General Lord Gowrie succeeds in hammering out an agreement whereby the two Independent members of Parliament, the former Lord Mayor of Melborne Arthur Coles and Alexander Wilson promise to support a Labour government under John Curtin until the next election, but without taking the Labour whip.
Since Curtin was unwilling to form a national government Lord Gowrie's preference had been to see the current coalition remain in power, but it rapidly became apparent during the talks that Billy Hughes was too old to take over the leadership of a barely cohesive coalition while the alternative leadership of Arthur Fadden would not be able to command the confidence of the House.

In Brussels, having received guarantees from the Belgian government that his men will all be treated as prisoners of war and will all receive immunity from prosecution for any war crimes alleged to have been committed during their occupation of the city General Reinhard orders his men to lay down their arms. To some extent this is a recognition of reality – they are desperately short of fuel and have virtually no ammunition larger than rifle calibre left – but the Belgians are also very keen not to have to fight their way across Brussels since their experiences to date have convinced them that doing so will lead to very heavy casualties both among their own troops and among the inhabitants of the city.
When news of the agreement leaks out in Brussels – which it very quickly does as the Belgian troops rapidly reoccupy the city and disarm the Germans – there are several situations where Belgian infantry are forced to disperse angry lynch mobs with fixed bayonets in order to safely evacuate the German troops. They are not always successful – since the tank troops wear black uniforms in a similar style to the SS, on occasion the Belgians make very half-hearted attempts to defend them – but overall the liberation of the city goes remarkably smoothly.
Last edited: Nov 12, 2016

Good. Another capital liberated by German surrenders. Is this becoming a pattern ?

Well the German lost Belgium even if they still occupy part of it. How much is still in their hands?

Banned
Cool, so uncle Rudolf still turns nuts and flies to GB except that time he is shot down and killed. (Rudolph Hess = Rudol Fesses = Rudol Butts.)

The Belgians will be happy to get their capital back, and nothing stopping the French or births from prosecuting the German war crimes once the conflict is over.

DracoLazarus said:
Good. Another capital liberated by German surrenders. Is this becoming a pattern ?
Click to expand...

That the Germans are losing the war? Errr, yes!


Xgentis said:
Well the German lost Belgium even if they still occupy part of it. How much is still in their hands?
Click to expand...

About half - the front line is roughly Antwerp - Leuven - Namur.


Archibald said:
Cool, so uncle Rudolf still turns nuts and flies to GB except that time he is shot down and killed. (Rudolph Hess = Rudol Fesses = Rudol Butts.)
Click to expand...

Is he nuts or was he on a peace mission from Hitler? I've deliberately used OTL quotes, and it really was never clear how much of the plan was in his own mind and how much foreknowledge Hitler had of it.


Paulo the Limey said:
The Belgians will be happy to get their capital back, and nothing stopping the French or births from prosecuting the German war crimes once the conflict is over.
Click to expand...

Realistically those who surrendered are safe from prosecution - but it's only one division.


Also, perhaps add a link to the first thread in the first post?

Banned
It's always an odd feeling when you get your second thread.

still enjoying this TL A LOT. Keep up the good work pdf27. So the german division surrendered? What are the losses, killed, wounded and POWs included? Roughly 20 000? The Germans are surely lacking experienced soldiers by now.

Banned
So the Heer have lost, what, about half a million surrendered at this point? That will (or at least should) massively increase the pressure on High Command and Hitler. That points to unrealistic planning and piss awful logistics, which are planning, not combat, failures. They also can't keep this quiet from the other armies about to face a shitstorm of Entente fire and steel. The only possible saving grace (and it is very temporary) is that, as far as I can determine, the French and British general staffs have not yet ramped up to the point oh being able to mount a general offensive before Winter - unless they don't care about Winter
Last edited: Nov 12, 2016

Army Group A and B have two armies left apiece, Army Group C has five for a total of nine armies between the North Sea and Switzerland. They're facing a total of ten French, four British, two Belgian and one Dutch armies, the majority of them being very substantially more powerful than what the Germans can field. It should be noted that the Germans have a single "Panzer" army left, with about as many armoured vehicles as a French or British Corps - many units are completely horse-drawn, and things are only getting worse on that front with the Wehrmacht looking to de-motorise further units.
There's also another underlying problem here - the Germans are short of animal feed, so as soon as the weather turns for the worse or they start having to fight a mobile campaign then their horses are going to start suffering very badly indeed. They're getting close to the point where if they have to fight a mobile campaign they'll completely collapse. The reality is that the winter will probably stop the campaign before they do (the British and French are going for lowest total casualties rather than a quick end to the war, so are unlikely to fight a winter campaign since the terrain will favour the Germans more and partially neutralise their advantage in armoured vehicles), but it's going to be a close-run thing. Spring 1942 is going to be very bad news for the Germans, however.

Banned
Oh, ouch, we're getting close to the kind of 3:1 odds where it takes essentially perfect defensive placement to hold out...

Banned
Nazi horses, who needs them ?

Archibald said:
Nazi horses, who needs them ?
Click to expand...

Archibald said:
Nazi horses, who needs them ?
Click to expand...

I do apologize, I just guessed that things like the above image must exist somewhere.


On another note entirely, has the war so far had any effect on US land or air doctrine?

Julius Vogel said:
So Loyalist Iwi had higher levels of service than those that carried on fighting and thus suffered more severe confiscations? I guess Tainui were not big fans for one

I do remember seeing a Maori war memorial in Rotorua one year, very moving stuff, very proud of their service and their connection to the king emperor.
Click to expand...

The [Maori-run WW1 recruitment] campaign was not an unqualified success. Although some 2200 men volunteered, about 20% of the eligible group, almost half became casualties and the committee found it difficult to maintain the promised reinforcement quotas. Some tribes - Te Arawa, Ngati porou, Ngai Tahu (on the whole, those who had been kupapa [Govt allies]) - contributed disproportionately; others such as Waikato and Taranaki, with confiscation grievances, scarcely at all. Pomare was especially embarrassed and annoyed that Waikato in his own electorate mounted a passive anti-conscription campaign.
...
It also raised hopes amoung Maori ex-servicemen that conditions of wartime equality with Pakeha soldiers would continue into peacetime. It did not.
​
The price of citizenship?: The Maori war effort, Claudia Orange (Kia Kaha, ed John Crawford)

The government continued the the voluntary system for Maori [in 1940], despite Pakeha criticism.
A parliamentary committee comprising the four Maori MPs and a legislative councillor was set up, and from May 1941 its chairman embarked on an intense publicity campaign. In some districts the increase in Maori enlistments was most satisfying, in others it remained disappointing: the raupatu (confiscation) area - Taranaki, Waikato, and parts of the Bay of Plenty - caused particular concern.
​
Arawa war memorial, Rotorua 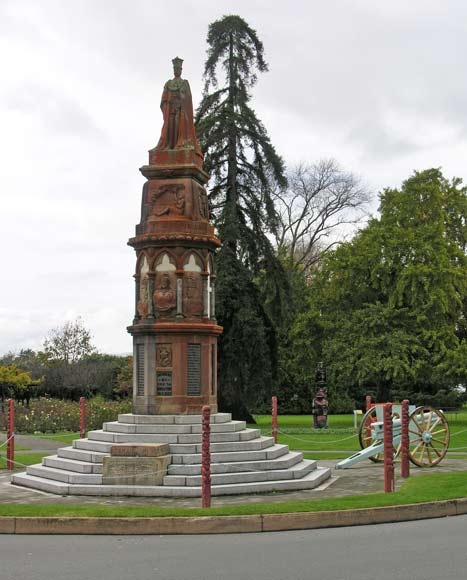 Off to look at airplanes now! Hmm, none in markings from a theatre in TTL's war. Some 'correct' RNZAF Harvard trainers, however.

German farmers, because where do think the army gets the horses from. In OTL they could rob the conquered nations but in this TL they have to choose between feeding the army or moving the army.
You must log in or register to reply here.
Top
Share:
Share
Top