Prometheus_2300 said:
By the way I've been improving my graphic design, would people like newer NBS or other media logos? Just @ me and tell me what logo you are looking for

OOC: I was looking around on the old thread and I was surprised to see that a couple crew members on the original starship Enterprise had been cast via pictures but not text (which made it impossible to find them via search). So I decided to change that, and also add one new character for one of the original crew actors who has sadly passed away: 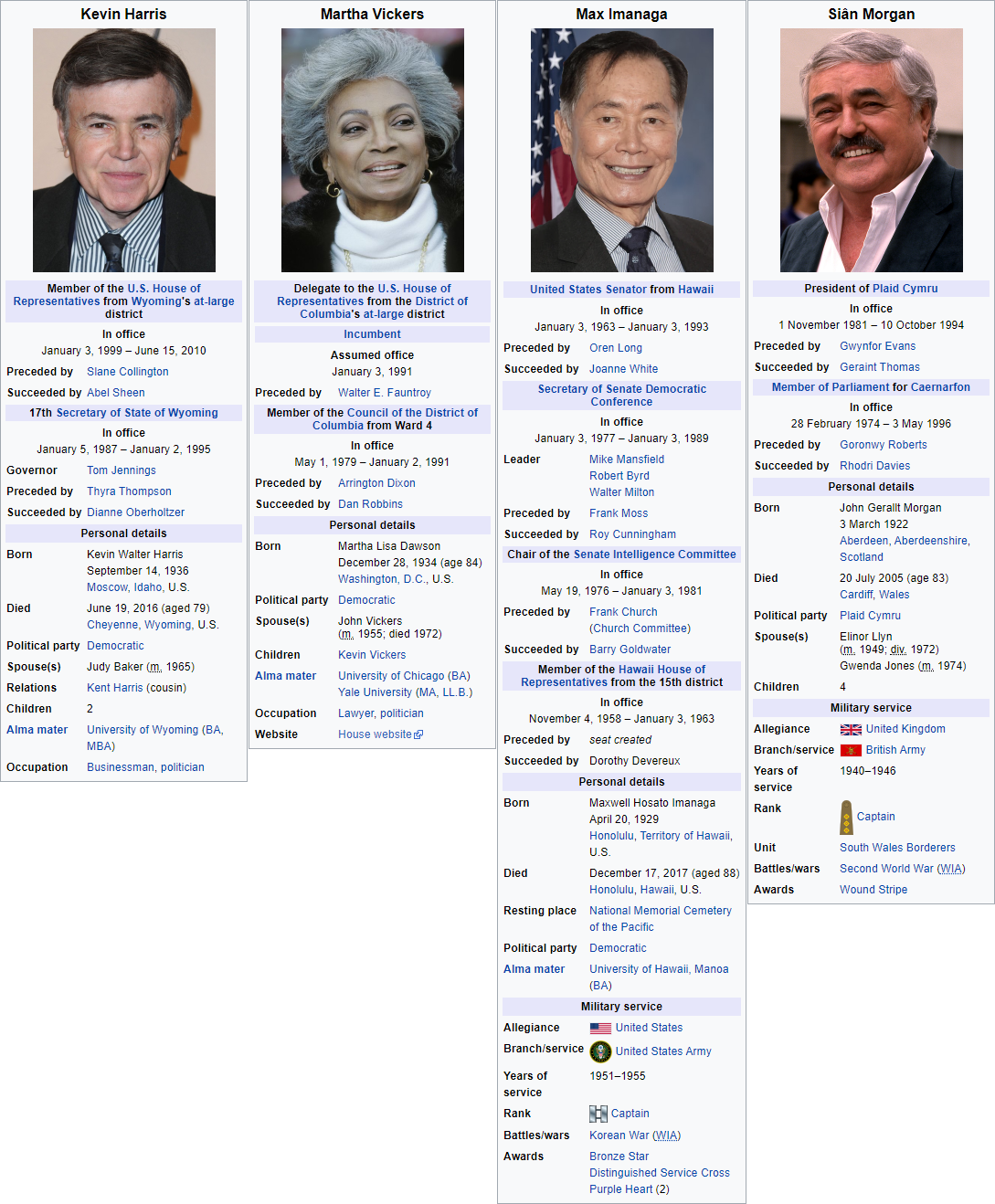 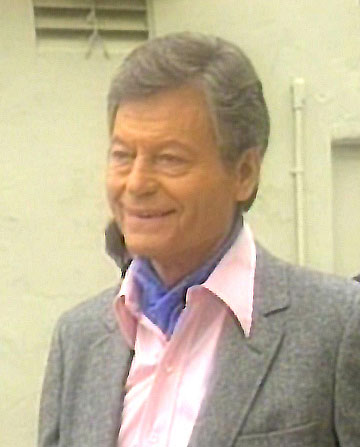 Known for his genial humor, Jackson entered local politics after gaining his medical degree, winning his first election in 1956 while continuing to practice medicine. He served as part of Georgia's Democratic delegation to the 1960 and 1964 Democratic conventions. Health care was his main concern. He retired from political life in 1990 due to declining health.

Often describing himself as "an old country doctor," Jackson became known for saying "I'm a doctor, not a..." when asked policy questions not related to health issues.
Last edited: Dec 16, 2019

OOC: Some of this contradicts what was previously established about Georgia's senators, but I may incorporate the other parts into an eventual Kelley infobox.

I used Toho actors in Japan as it is a big studio of Japan. Plenty of good choices for possible people. I left Who and Star Trek actors to others.

I have a picture in my head of him saying "I'm a doctor, not a ..." before giving a well-informed and concise explanation of the topic.

Former MP Hannah Martin in October (photo by Keeley Hawes)
​
Former MP Hannah Martin has moved on from being Shadow Home Secretary to stay-at-home mum to her three children. Martin, who resigned from her seat in Parliament in September, has relocated to Chicago with her eleven-month-old son Tyler, moving in with her husband, Speaker of the United States House of Representatives Daniel Maddox. It's a bit of an adjustment for her, moving from the top political circles in London to long days indoors hiding from Chicago's brutal cold.

"If I had known how bloody freezing it is (-3° when we meet) here, I would have made him move to London," she says, half-sarcastically as we have tea in her Chicago flat. When she ran for Labour leader in 2014, issues over her marriage to Maddox led her to decide not to seek American citizenship. In fact, she hadn't sought status as a permanent resident in the United States until after the 2018 general election because she knew that would be used as an attack by political opponents. She has since gained permanent residency and is working on securing permanent resident status for her two children from a previous marriage before the next school year starts in September. The two are living with their father, a solicitor in Manchester, until then.

"It's hard being away from them," Martin says, "We chat every day on FaceTime, but it's still difficult as a parent not to be there."

Maddox is frequently in Washington, and after an exhausting move across the Atlantic with an infant "whose ears popped when we left Heathrow, then again when we landed in New York", Martin isn't planning on flying anywhere for "a few more months at least." With that in mind, she's been taking some much-needed down time when her husband is away, mostly exploring Chicago and acclimating to life in the States. "Besides the obvious things—weather, accents, food—there's really always an election going on here," she says. "The politician in me says it's marvellous, but at the same time, it's a bit mad."

She still keeps tabs on politics back in the United Kingdom (she's supportive of Labour leader Jack Coll and says she's "morbidly curious" who will replace Richard Samuels as leader of the Conservatives before the next election), but says her own political career is "almost certainly" over. She's not eligible for American citizenship until 2024, anyways, and has no plans to move back to Britain. Martin says she's had employment offers from several American companies, but says she'd like to either pursue non-profit work or help the Democrats keep their majority in the House of Representatives in next year's elections.

OOC: With the year (and decade) coming to an end, here's a couple infoboxes of a few things from the first 11 months of the Seaborn administration: 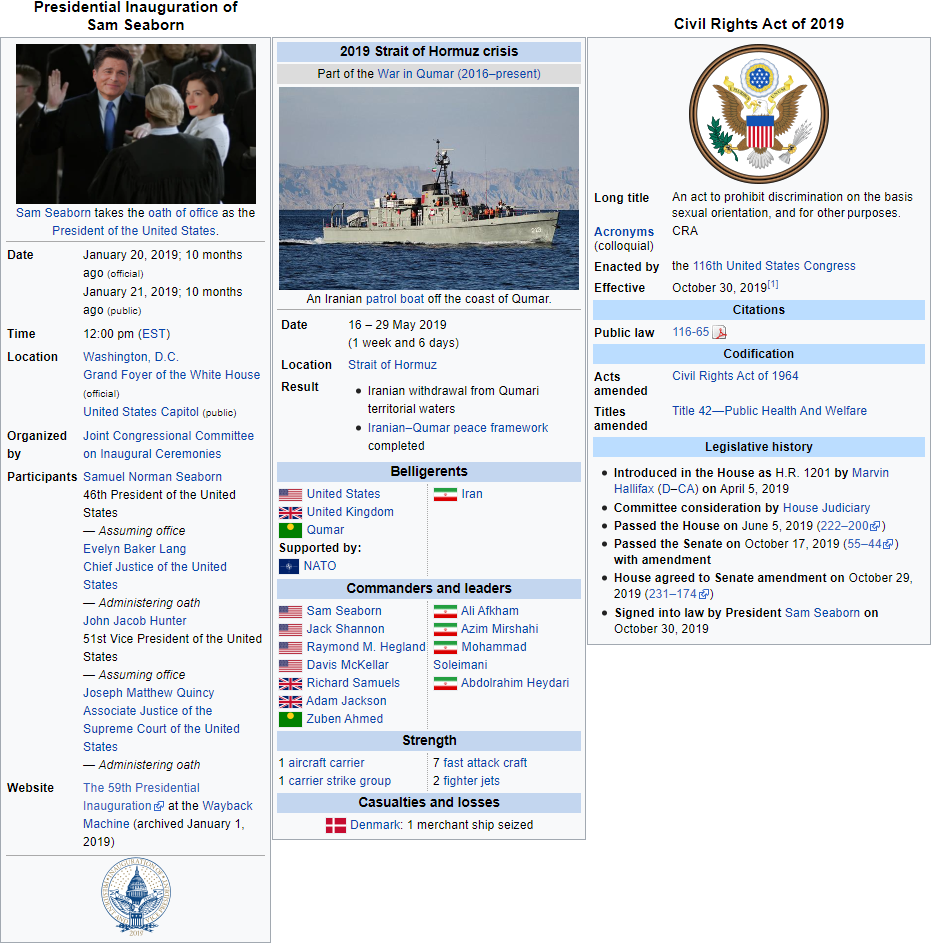 And an election box for the VP contingent election that Jack Hunter won: 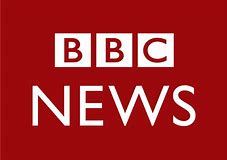 The Esher & Walton by-election will be held on Thursday January 16th. The election is required after the death of former House of Commons Speaker Anthony Walker. There has not been a contested election in the seat involving the Conservative, Labour and Liberal Democrats since the 2007 General Election.

The local Conservative Association has confirmed that the former Business Secretary Martin Greenwell, who lost his seat in Great Yarmouth at the General election last year by just five votes has been adopted as the Conservative Party candidate. Greenwell had been regarded as a rising star in the party and a probable leadership contender before his defeat.
Last edited: Dec 20, 2019

Not sure how you did it. Time traveler...

A Happy Christmas to all our readers and followers.

The Seaborns spending Christmas in the White House or California?

WestWingNut said:
The Seaborns spending Christmas in the White House or California?
Click to expand...

I would like to think they would be spending their first Christmas in the White House.

It was a Christmas to remember at the White House for President Sam Seaborn's first holiday season as commander-in-chief. The president set an ambitious schedule, arriving in Qumar to celebrate Christmas briefly with American soldiers stationed there before flying back to Washington to spend the holidays with the First Lady and her family.

The president enjoyed a brief Christmas breakfast with American soldiers stationed in the Qumari capital of Jabal Nafusah, continuing the tradition set by Presidents Santos and Walken of spending either Thanksgiving or Christmas with American soldiers deployed overseas. Santos visited soldiers stationed in Kazakhstan every year as president, while Walken visited soldiers in Qumar during his final three years in office.

The president reportedly traveled light on staff as a result of his standing directive to White House personnel to spend time with their families, resulting in an exhausted Seaborn drifting off to sleep mid-interview during an interview with NBS. Deputy White House Chief of Staff Kevin De Vost, running the White House while Chief of Staff Will Bailey is on a presidentially-ordered vacation, apologized citing the president's "extremely packed schedule" and rescheduled the interview.

A reinvigorated President Seaborn came down the ramp at Andrews Air Force base and returned to the White House in time to join First Lady Lauren Parker-Seaborn and her family for a traditional Christmas celebration. 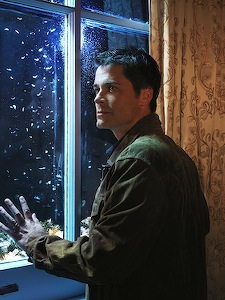 President Seaborn at the White House on Christmas Eve, 24 Dec 2019 after returning from Qumar.

With the New Year having begun, a slew of new laws passed last year now go into effect. Some major changes will happen around the country, including a nationwide raising of the age to buy tobacco, as well as many statewide changes, including minimum wage hikes, data privacy laws, gun purchase laws and more.

Some of the many changes now in effect across the country:

Many states and municipalities had already raised the age to purchase tobacco from 18 to 21 as part of a push to curb use among teens and young adults. As of today, that is now the law nationwide after a bipartisan bill amending the Federal Food, Drug, and Cosmetic Act was signed by President Sam Seaborn shortly before Congress adjourned for the holidays. The ban applies to all tobacco products, including cigarettes, cigars, chewing tobacco and e-cigarettes.

Same-sex couples in Tennessee are now able to apply for marriage licenses. The Volunteer State ended its defense of its ban on same-sex marriage after the passage of the Civil Rights Act of 2019, and a federal District Court ruling subsequently found in favor of the plaintiffs who challenged the state's ban. Only ten states continue to define marriage solely as between a man and a woman. The Supreme Court is likely to address the issue during the remainder of its current term.

New York State judges will no longer set money (or cash) bail for misdemeanors and most non-violent felonies. The move comes as criminal justice reform advocates say that the laws have kept poorer people in jail awaiting trial just because they could not afford bail, while wealthier people charged with the same offenses could stay free until their day in court. The ruling also frees most of those currently in custody who could not pay their cash bail under offenses where money bail will no longer be offered.

In lieu of cash bail, other forms of supervision, such as mandatory check-ins or calls, will be used to ensure that defendants appear in court. Cash bail will still be used for those accused of violent felonies.

The move is part of a trend among many states to reform their bail systems, with New Jersey and Illinois in recent years having reformed their bail systems. California voters will vote on a bill during this year's midterm elections on whether to eliminate cash bail for most non-violent offenses.

Three Western states will now allow family members, law enforcement and others to petition a court to temporarily block a person from accessing firearms if a judge determines the person is a threat to themselves or others. These laws, called "red flag" laws, mirror those adopted in a dozen other states, such as Florida, Illinois and Massachusetts that similarly allow for a temporary confiscation of firearms from a person a court deems to be a credible threat to themselves or others.

The laws are part of a nationwide effort to reduce gun violence and prevent mass shootings.

A spate of dramatic new laws take effect today in California, ranging from laws on data privacy to "gig economy" work to the use of force by police.

Signed by Governor Abbie Heilemann, California's new laws on data privacy are among the strongest in the nation. The laws will allow consumers to ask companies what data has been collected on them, ask them to delete it, or forbid selling it to third-parties. The law also applies to companies doing business in California that collect their user's data, such as Facebook, Amazon, Google, Apple and others.

The Golden State's new labor law could upend the "gig economy" there: it requires some companies to reclassify "independent contractors" as employees, which provides them with added benefits and protections. Companies such as Uber have already filed suit with the state over the new law. The app-based rideshare program employs thousands of drivers as independent contractors and providing them with benefits enjoyed by employees―such as a minimum wage, and disability or heath insurance―would cut deeply into the business' revenue.

Minimum wage goes up in 21 states

The federal minimum wage has not increased since 2009, with states and municipalities having to make increases in the meantime. The Democrat-controlled House of Representatives passed a bill that would gradually increase the minimum wage over the next five years, but the bill has not been taken up by the Republican-led Senate.

When is the first lady's due date?

RRusso1982 said:
When is the first lady's due date?
Click to expand...

Late March/early April.
Threadmarks
You must log in or register to reply here.
Top
Top